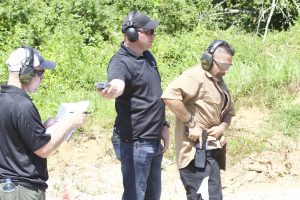 If you shoot guns but are not familiar with what a shot timer is, you're not alone. A recent poll we conducted showed that out of around 2,000 people who identified themselves as going to the range/shooting at least “several times a year” or more, about 80% did not use a shot timer at all during live-fire.

The numbers shocked me. I thought many more people used shot timers than what the numbers indicated. This shows a huge blind spot in many shooters' training. I personally believe they are incredibly important to anyone serious about self-defense in several ways.

But first, in case you haven't used one, here is a quick rundown of what a shot timer is.

What Is A Shot Timer?

Competition shooters and law enforcement understand the importance of delivering shots quickly while maintaining accuracy. Early attempts to time shots required someone with a stopwatch to time the shooter.

For obvious reasons, this produced inconsistency in the recorded shot times, making any statistical data flawed. In the early 1980s a device that measured the time between a command prompt, like a beep and a second beep for the end time prompt, was developed.

The time between beeps would be pre-set based on the time standard one would be expected to complete a particular drill. This is what is referred to as a par time. If you have seen targets that turn and face the shooter for a predetermined time and then turn away, you are seeing a par time in application.

It didn't take long before that basic timer was improved to not only set par times but also record the time of each shot fired via a microphone.

Now shooters were provided trustworthy data that could be used to track performance against a standard. Furthermore, the new timers provided shooters the ability to quantify and track not just that they were shooting a specific number of shots in a particular par time, but what their times between shots (called split times) were, or how long it took to fire their first shot, etc.

Most shot timers are pretty basic; consisting of a speaker, microphone, and logic board and a small screen to display the information. When I say they are basic, your shot timer display reads like a 1970s calculator.

As ‘simple' as shot timers are, their costs are still pretty dang high, with the average price around $120. About 25% of people in the above-mentioned poll said the reason they didn't have a shot timer was this high cost.

I have used these in a pinch, but I find them to be finicky about picking up shots and the beep can be somewhat hard to hear with ear protection. 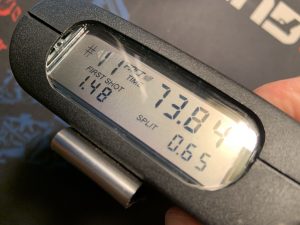 I love my PACT Club Timer 2, but the display is, ‘no frills'

Second, some don't see a benefit in shot timers because they have never used one, don't know how, or haven't seen how useful they are.

Here is the 30-second rundown on why I think shot timers are important.

Why Shot Timers Are Important

What I mean is that slow fire at 25 yards is a great application of fundamentals, and at 25 yards, you may have time to apply all those fundamentals. Slow fire at 5 yards, means you don't survive a deadly attack.

The range is the best place to learn your limitations and push those limitations.

And shot timers allow you to quantify your limitations. I've asked many people who shoot often, “how long would it take you to fire three rounds on an 8-inch target at around 3 yards?” I get answers like “I have no idea,” “15 seconds,” “5 seconds,” “I never shoot that close so maybe 1 second,” I'm sure you get the point.

We know most deadly-force encounters occur at 3 yards and are over in 3 seconds. So if you're training to use a gun to defend yourself, and I give you the most generic probable scenario, are you good enough to survive? How is one to know?

The best tool to find out is a shot timer.

This is not a criticism of anyone, it just exposes the blind spot they had in their training. Interestingly, an overwhelming majority of people see the value in using a shot timer after being exposed to one during class. 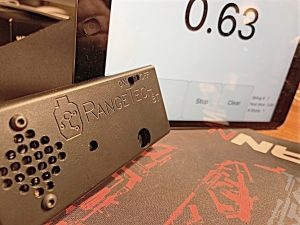 Shot timers can also add the element of stress to your shooting. While nowhere close to the stressors of being shot at, a timer adds stress because it becomes a harsh arbiter of your performance.

The timer doesn't care if it's cold outside if you forgot to sweep the gun off safe or messed up clearing your overgarment. It displays your time for all to see. So in this way, we push ourselves to be better, faster, and more accurate than the last time.

The end result of using a shot timer is a more proficient shooter with faster follow up shots.

If you haven't used a shot timer, or haven't been made aware of their usefulness, I hope this gets you thinking about using one in your training.

If you want to buy a shot timer to help up your shooting game, right now is a good time because we are in the middle of our special launch of the RangeTech BT Shot Timer. This week only you can get some special launch only bonuses when you buy! Click here to check it out and secure your launch bonuses!. It connects to your phone and keeps all the data to help you compare your results and track your progress.

Experiment: I Didn’t Clean This Gun For Three Years
New From Glock – G44, a 22 LR Pistol

5 Responses to What Is a Shot Timer, and Why You Need One