Okay, many people ask me:

“what is the best home defense gun?”

The answer requires a bit of an explanation so stick around, I'll give you one.

I don't just choose my AR-15, I have multiple things that I've incorporated into my home defense strategy. I've put a strategy together beforehand. My AR-15 is my preferred gun for home defense if it's within reach. I'll explain why in a bit. But first:

The guns people use for home defense is a hotly debated topic. To be honest, I generally have the opinion that the gun you have access to is the best gun for the job at that moment. That being said, there are tools that are better than others. That is why there is a “gun hierarchy” in my home, and yes I probably have more guns than the average person does.

Let's take a look at a few considerations, for each firearm choice.  Ultimately we will land on my go-to home defense weapon at the end of this article and why I chose it. 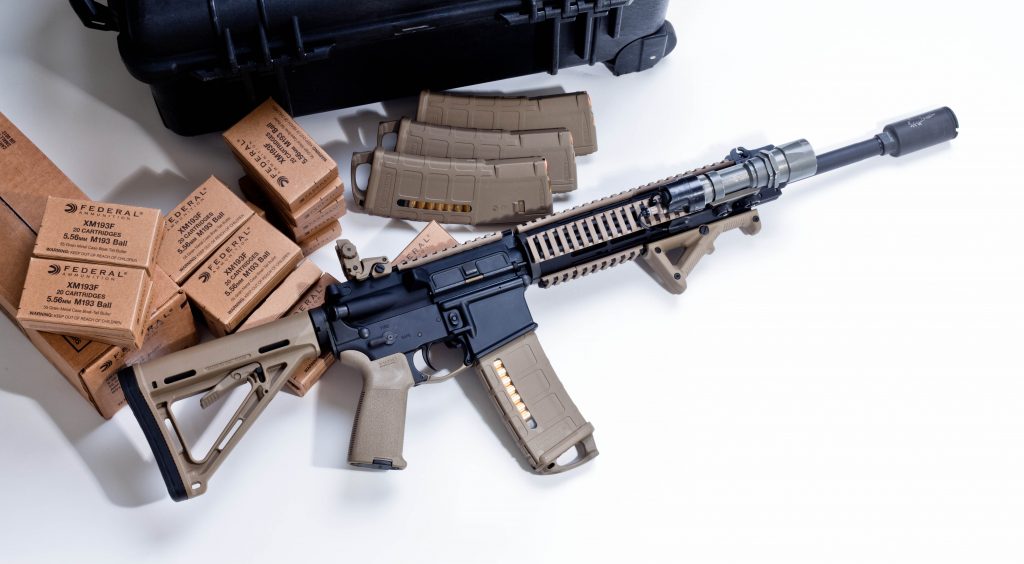 This is ConcealedCarry.com, not Shotgun World. So, it should come as no surprise that I own a handgun. Or two …

Anyway, handguns are a way of life for all of us here at Concealed Carry. I have secured handguns in various places throughout my house that are easy for an adult to get to if needed. And, a handgun sits in my bedside safe with a few spares, loaded.

Handguns do have some limitations, however. For example:

capacity can be limited

When compared to other guns on this list, even a Glock 17 with standard capacity mags holds fewer rounds than you might need. Especially if there is more than one bad guy in your house and you find yourself in a shootout.

Of course, you can get extended capacity magazines for your home defense handgun. However, when you do that it can make the gun feel heavier due to the added rounds. This isn't a huge difference, but can definitely make the gun feel different. Also, not all after-market magazine extensions are created equal, and some have been known to induce feeding malfunctions with the gun. 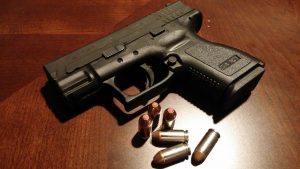 An as a factual matter, it is easier to shoot a long gun well, than a handgun. When I say ‘well' I mean accuracy and recovery wise. In general, having four points of contact, (stock weld, forehand grip, dominant hand, and contact in the pocket of the shoulder) aid in recovery and stability. Additionally, a longer sight radius makes aiming a bit more forgiving. So in general, shooting a long gun will be easier than shooting a handgun. However, while this is true for most people, it certainly does not apply to everyone.

For me, handguns still play a role in my home defense strategy but if I could choose between my handgun or a rifle, I'd choose a rifle. And if I didn't have a choice I'd take the handgun over nothing.

The shotgun is the go-to home-defense gun for many, many gun owners. Heck, I've even written an article for a different publication on why I thought it was the best home defense gun. I've since changed my mind, and, sadly, cannot change that article.

There are some myths concerning this gun for home defense that many people may not have thought about. We've covered these myths more in-depth in a different article, so I won't go back into it too far here. 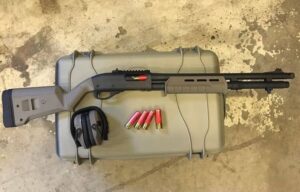 The myths, just in case you need to know them, are this:

Again, those are myths, not truths. If you disagree with either of those, please go read the above-linked article.

If you're good to go, the next thing we need to discuss is the type of shot you're going to use. We read a lot of different comments and posts about what type of shot is best for home defense and while I won't tell you what is right or wrong, I'll tell you what I use.

What is the best shotgun load for home-defense

Suffice it to say that there are pluses and minuses to either buckshot or birdshot and that debate goes outside the scope of this increasingly long article. Personally, my Mossberg 500 is loaded with 00 Buck, and the reason why is because it's a last-ditch attempt at bad guy stopping.

What this means, at least for me in my isolate and defend strategy, is that our scattergun is occupying my wife's hands and is ready to take over should I be taken out. I'm likely not leaving my family behind to search the house for the bad guy, gun at the ready. They will have to come and find us. We have a defensive strategy that gives my family a huge tactical advantage.

Many people have ideas about what makes the best shotgun load for home defense.

The 12 gauge filled with buckshot will likely dislocate her arthritic shoulder, but if she had to choose between that or protecting our children she's willing to do what she has to.

Why buckshot? Because birdshot loses momentum much faster and the hallway we use as a choke point is very long. Can birdshot be devastating? Of course, it can, especially depending on the distance you find yourself away from a bad guy. But for us, we've made the decision that it's not enough given the length of our hallway.

Evidence against using birdshot for home defense is growing

However, there is a growing number of documented instances where birdshot failed to penetrate deep enough to disrupt any of the vital organs and stop the bad guy. What you are relying on is a physical response to the pain of being shot rather than a physical disruption of the way the body works. And we all know not everyone stops the attack because they feel pain.

Ultimately, regardless of what happens to me, I want my wife and kids to stay alive.

Many shotguns, like my old, trusty Mossy 500 also have capacity problems and don't even hold as much ammo as a modern-day pistol. Still, it plays a role in our overall strategy. 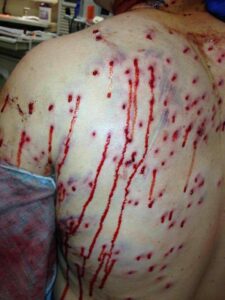 No doubt this hurt, but the birdshot does not penetrate deep enough to effect major organs.

Yeah, I love my PCCs.

Pistol caliber carbines catch a lot of hate from some gun folks, and I'm not entirely sure why. I guess it's because shooting a pistol round through a rifle raises some evident contradictions. Rifle rounds perform better than pistol rounds when used in rifles and the converse is true as well. So maybe just shoot a rifle round through rifles and pistol calibers through pistols.

Nevertheless, I've got one that takes 32 round Colt Sticks in AK platform that I've got thousands of rounds through without a single malfunction.

I work between 12-16 hours a day, split between my day job at Concealed Carry, and my own business. At all times it's within reach with 4 loaded mags nearby.

Why is this the one right within reach?

Let's think about this for a moment: 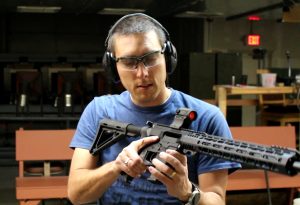 One of Jacob's range trips with a PCC from Palmetto State

There are other things unique to this particular gun that make it fantastic for use in home defense situations, but that should suffice.

I love my AR-15 pattern rifles. To me, this is the best home-defense gun out there. They're the most accurate, offer the best performance, allow quick follow-up shots, and the list goes on.

I consider any AR pistol with at least a 10.5-inch barrel up to a rifle with a 16″ barrel as a solid option for home defense with the .223 round.

Are they loud? Yes. But, to me, the ability to stop bad guys in their tracks with the capacity they have is outstanding.

And, oddly enough, sometimes someone will say an AR-15 is too loud for home defense. But will then go on to recommend a 12 gauge shotgun instead, as if they're somehow quieter. In reality, both fall within the 155 – 160 dB range. Both become louder, to a degree, with each inch shaved off the barrel for either gun.

So, whoever is in the room of the house at that point is going to have at least temporary hearing loss, regardless.

What about over-penetration of this particular round?

Honestly, I'm not any more concerned about the .223 than I am the 9mm or buckshot.

There is a lot that goes into how a round will penetrate, and it's a little inaccurate to paint an entire caliber as having the same penetration. However, gun safety rules always play into real-life situations. Knowing your target and what's beyond/around it is key no matter what kind of gun you're shooting at a bad guy. Why? Because they ALL have the capability of penetrating through people, walls, and then more people. 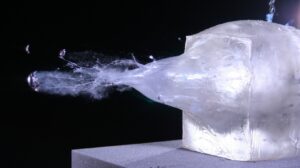 What calibers will and won't over-penetrate walls inside my home?

Yes, even a .22lr has been shown to penetrate through a few walls.

I actually worry less about over-penetration

when shooting .223 than other calibers.

While contrary to what you may think or have been taught, it's been shown over and again that .223 and 9mm will penetrate walls about the same, even though the .223 is moving a lot faster. But, because the .223 has a higher probability of stopping the attack sooner. Therefore, fewer rounds need to be fired limiting the number of possible misses you may have.

Additionally, the .223 projectile immediately loses ballistic stability and begins to tumble. This severely cuts its velocity down and therefore how and what it will travel through after hitting an object.

In any case, you need to think about how you will respond to a threat that has entered your home. As mentioned above, consider not going to searching for the bad guy. There are a host of tactical problems with this strategy. 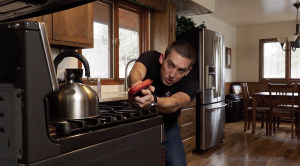 You can probably tell that I've given the guns I use in my home defense strategy a lot of thought. I urge you to do the same if you haven't already. And, if you need help in this regard, we offer a home defense course that is fantastic and goes even further into the weapons and strategies spoken about in this article. No surprise it is titled Complete Home Defense.

You can find the course here.

Episode 493: Universal Background Checks and Why They are SUPER Bad
Episode 494: Reaching Beyond Boundaries: Surviving Mann Preview with Don Mann

17 Responses to Best Home Defense Gun, I Choose an AR-15