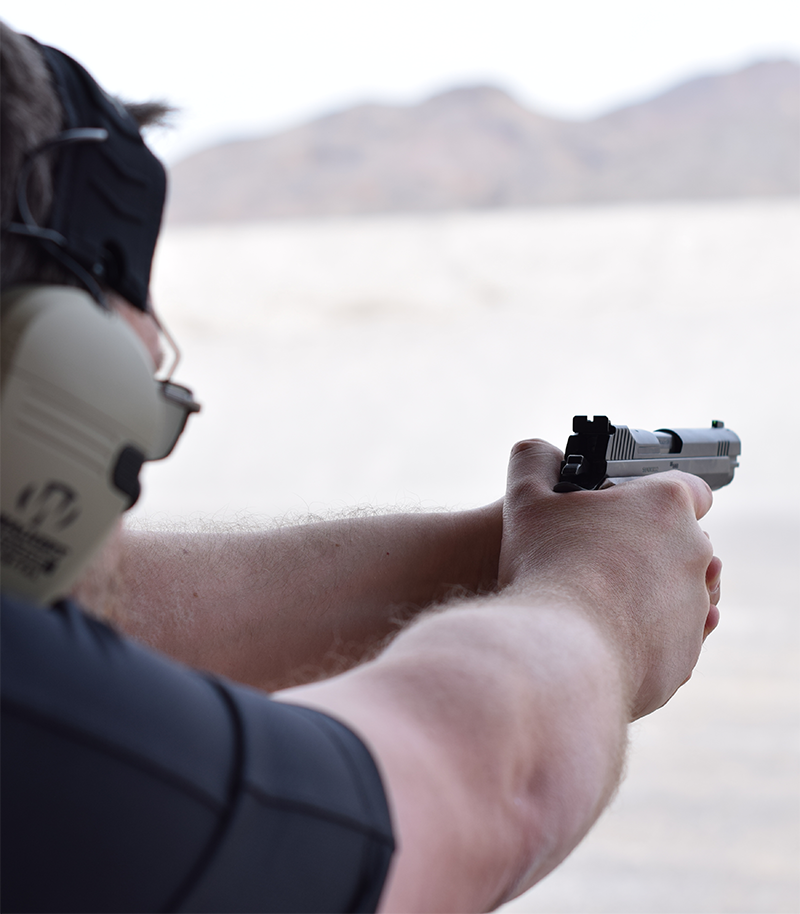 Here I am wearing my Walker's Razor Digital hearing protection at the SIG Sauer media day in January, 2019.

I've had my set of Walker's Digital Razor Hearing Protection Muffs for well over a year now, and have used them countless times for many different tasks. These tasks include shooting at the gun range, cutting grass, and using my loud two stroke leaf blower.

While these aren't my only hearing protection, they are the ones that I reach for the most and consider my main, or go to, ear pro. The main reason why, is because they work well and are extremely comfortable for extended range sessions.

I go to the range quite often, more than the average shooter does, and when I go I tend to burn through several hundred rounds of ammunition in a single session. I shoot a lot, and need something to protect my ears that is actually comfortable to wear for a couple hours at a time.

Without trying to sound like a fanboy, this set of hearing protection does just about all I need it to do. I have a BIG head with ears that are large enough to match, and I have no coverage issues. In fact, my ears fit nicely inside the muffs, and there is extra room on the padded head band if my head was even bigger.

I have other hearing protection that constantly needs to be adjusted to keep the muffs tight against my head to actually protect my ears, but the Walker's just sit there nice and snug and don't require any adjusting once they're on. And, being that they're electronic, I can hear people talking while at the range.

But, as with just about every piece of electronic hearing protection I've ever used, if you're talking to someone and a loud bang, like a gunshot goes off, it will cut the sound so you won't be able to hear the entire conversation until the loud noise stops. That's just the name of the game because the primary purpose of hearing protection is to protect your hearing.

Maybe the really expensive hearing protection doesn't have to cut all the sound when a loud gunshot pops off, but for me, this is good enough.

I find that's it's a positive in a class where constant breaks are taken so an instructor can teach something of importance. Instead of constantly having to pull them off, either partially or fully, I can just turn the sound up if needed to hear what's being taught.

A feature these also have, that I've admittedly not used to date, is the little 3.5 mm headphone jack.

The volume is adjustable, and you know how loud the volume will be based on an audible beep that coincides with the actual volume of the ambient, outside, non-gunshot noises and voices. Gunshots will be totally muffled, which, again, is the point.

They take two AAA batteries for power and have an auto shutoff feature to help save those batteries. While I have not actually tested how long the batteries last, I can say that I've only replaced them a few times in the time I've had them.

As someone who has some ear damage from my time in the military with a constant tinnitus ringing in both ears and an intermittent whoosh sound in my left ear, I feel it absolutely necessary to protect my ears which is why I also use ear muffs when doing yard work.

What kind of ear protection do you use? If you're in need of an upgrade, you can find the Walker's Digital here, on Amazon.

Episode 401: Bugging In – Are You Prepared?
Are Gun Shops Essential Businesses?