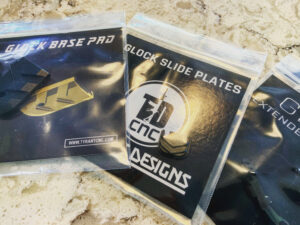 I'll give you my take on these new products from Tyrant Designs CNC. (from left to right) Glock Magazine Base Plate, Glock Slide Plate Cover, Glock Extended Slide Stop Lever.

I have done some reviews on Tyrant Designs' products in the past. Most recently I reviewed a compensator that has a really unique mounting method. If you are not familiar with Tyrant Designs, they are a CNC shop who produces quality, aftermarket handgun products. They mostly focus on Glock handguns but have some items for popular M&P and Sig handguns, as well.

Tyrant Designs routinely rolls out new products, and when they do I am fortunate enough to be one of the people who gets to test it out and give them some feedback.

First up is their new extended slide stop/release. They currently offer this for pretty much all Glock handguns except Gen 3 and Glock 44. I imagine it's only a matter of time before they have one for the Gen 3's as well. It is made of 6061 aluminum and is a direct drop-in replacement that requires no modification and is ridiculously easy to do. I was really excited when I heard that they had an extended slide stop for Glocks in the works. 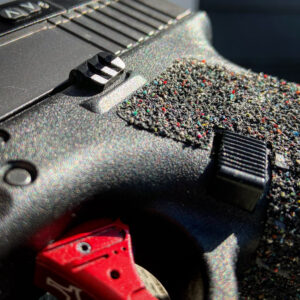 The chevron pattern on the new slide stop does more than just look good.

I have been using a Vicker's Tactical extended slide stop on my Glocks for years, so I was interested in seeing how they compared. The Vickers Tactical version looks a lot like the stock lever but has a small ‘bubble' that extends slightly, providing just enough surface area to make using the lever a bit easier.

The Tyrant Designs model doesn't stick out much further than the stock lever. It isn't even much bigger than a stock lever either. Its advantage comes from the aggressive chevron design. The lever has an aggressive feel and allows for positive engagement.

Not only does it look good, but it has functioned how you would expect. Extended slide stops of any kind are not without some potential drawbacks. If you have larger hands, you may find that your grip engages the slide stop during shooting; which is obviously not a good thing.

I personally have average to below-average sized hands, so I have never had an issue. But I know some who have had an issue shooting my Glock 19 with the Vickers slide stop.

So while it is called an extended slide stop, it may be more accurate to call it an enhanced slide stop, as it doesn't really extend much. Whatever you decide to call it, you can get one in one of six colors for about $29 bucks. 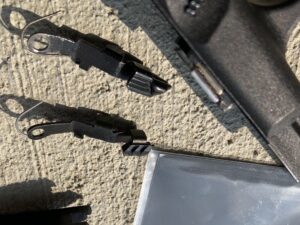 The Vickers Tactical Extended Slide Stop (top) and the Tyrant Designs Slide Stop (bottom) are drop-in replacements for those who want to make engaging the slide stop on their Glock handgun a bit easier.

Slide cover plates with custom engravings have been very popular for a while. I haven't been a huge fan of putting bright colored engravings on the back of my slide, for the simple fact that I don't want anything distracting my eyes when I am trying to quickly pick up my sights.

The Tyrant Designs product is CNC machined aluminum and comes in one of six different colors. It also has the company's recognizable chevron pattern, which looks quite sharp. The black slide plate isn't reflective so it is not distracting, even when shooting with bright sunlight overhead.

The product doesn't really provide a performance advantage, but for $20 you can easily dress up your Glock. 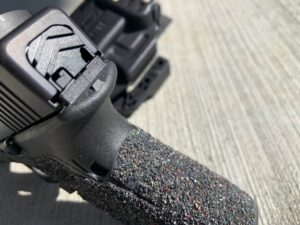 The black slide plate cover dresses up my Glock 19, without adding any distracting imaging or colors.

The product I got to test out is their aluminum standard capacity base plate for all Glock magazines. These machined base plates come in all six colors and have that same aggressive chevron pattern. The base plates are a touch heavier than the standard plastic base plate.

My outdoor range is compacted mulch underfoot, so I haven't dropped my mags on the concrete or gravel a bunch … yet. I imagine the black coating will get dinged up a bit, but stuff like that happens when you use your gear. You won't be adding any length to your magazine as the baseplate is about the same thickness and dimension as a standard baseplate.

Putting one of these bad boys on your magazine is going to run about 25 bucks; unless you're living high on the hog and want to purchase a Glock mag with one already installed for 45 dollars. The pre-installed is actually a pretty good deal if you need more magazines. And truthfully, who doesn't need more magazines?

If you aren't in the habit of marking your magazines with your name, you'll want to after installing one of these. 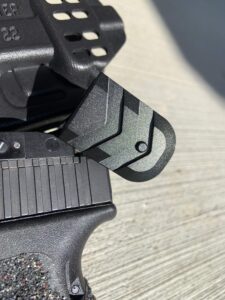 The chevron pattern adds a bit of texture to the bottom of your Glock magazine. Installation is extremely simple and adds a bit of weight to the base of the magazine to help in reloads.

Past reviews on Tyrant Designs Gear:

Compensator for your EDC gun.