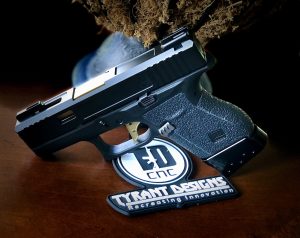 This extended magazine release from Tyrant Designs is a winner.

I first became aware of Tyrant designs when I did a review of their S&W Shield magazine extension. I found their workmanship was great, and the extension was super nice. So when they came out with an extended magazine release for the Glock 43 I wanted to check it out. You can get an extended mag release for your gen 4 or 5 Glock, or a G43, which I opted to test. I ordered it in their gray color, but they also come in red, blue, machined aluminum, and black. I received the item in a few days and immediately had to install it.

Changing out a magazine release on a Glock is super simple. In fact, here is an in-depth video I did explaining how to completely strip your Glock handgun. The fit of the release is spot on. No modifications or anything is needed. It slides in like it came from the factory. I actually love the texture of the mag release.

It has a chevron pattern that creates a pretty aggressive feel, without being rough. While it says it is an extended magazine release, don't start to think this is like some that extend out so far as to bump on everything causing your mags to eject unintentionally. This is extended just barely past the stock release, which makes it easy to manipulate. 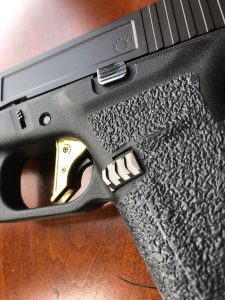 The texture on this is a perfect balance, not too aggressive and more tactile than stock.

At around $28, this aftermarket product is something that not only looks really cool but is super functional. Making it easier to engage your magazine release can help make your magazine changes smoother. Kinda hard to be against that right?

The handgun products Tyrant Designs is producing are mainly for the Glock and S&W Shield. So if you don't have one of these guns, you're going to have to get one. They also make some nice parts for rifles and have some cool swag on their page. Check out my video review:

I can definitely recommend this extended mag release from Tyrant Designs. Do you have one? Let us know in the comments below.

Episode 256: Breakdown of Cincinnati Bank Active Shooter Event
How To Focus On the Front Sight, and Shoot Better