Join Our Newsletter
Shop Our Store
MAIN MENUMAIN MENU
By Matthew Maruster on August 4, 2016 in Gear

Yes, there has been quite a stir in the gun community over the last few years with new gun lubricants and solvents coming on the market.  Some good and some, well not so good.  With claims that some of these lubricants are very similar, if not nothing more than re-packaged cooking oil, the skepticism is rightfully strong for any ‘new' gun oil on the market.  After all, the tried and true Hoppes#9 solvent and Hoppes gun oil that your grandfather used is still the go-to solvent for many gun owners.

Well let me introduce you to a ‘new' gun solvent and gun oil that is not new at all.  Enviroclean Gun Cleaner and Ogre HP Gun Oil from Ogre Manufacturing is finally popping up on shelves of gun stores around the country.  I say it is not new at all because Enviroclean Gun Cleaner and their Ogre HP Gun Oil, were actually formulated in 12 years ago in 2004.  Both products have been used by several professionals over the years but were never really distributed nationally.  The company that makes Enviroclean Gun Cleaner and Oger HP Gun Oil, Ogre Manufacturing, makes a couple different environmentally friendly products for gun owners and fishermen/women.  They are a USA based company, producing everything in Milwaukee, Wisconsin.  Beyond that they are a company that has made an effort to produce not only a great product that is tough when it comes to cleaning, but one that is easy on the user and environment. 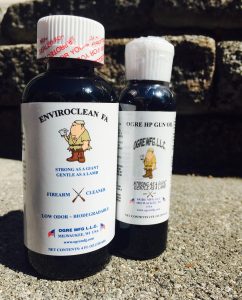 About 9 years ago, I went away from using Hoppes#9 as my gun solvent.  I switched to a company that made biodegradable, environmentally safe gun solvent and lubricant in one.  I mainly switched because of the high odor solvents used in Hoppes#9.  I found that the product I switched to was much more pleasant to work with as far as odor, and did just as good of a job cleaning and lubricating my firearms.  The problem was, that the product I was using was more expensive than Hoppes#9 and like most of you, living on a fixed budget, it is hard to justify spending 2 or 3 times the amount of money for a product just because it smells good and is easier on my hands.  That is why when I had the opportunity to try Enviroclean and Ogre HP Gun Oil, I was excited.  I tried out two of the products Ogre Manufacturing makes: their  Enviroclean Gun Cleaner, and their Ogre HP Gun Oil.  I liked the fact that Enviroclean Gun Cleaner was low-odor, environmentally friendly, and did not cost an arm and a leg!  What makes Enviroclean Different?  From the manufacturers web page this is the description of Enviroclean :

Enviroclean FA is biodegradable and is considered non hazardous under DOT regulations. With a flash point greater than 200°F (93°C), Enviroclean FA is safer to use than conventional firearm cleaning solvents such as kerosene, acetone, xylene, toluene and isopropyl alcohol.

How did it work for me?   Initially I found that Enviroclean had almost no odor what so ever.  In the bottle, and while cleaning with it, I was surprised that there was no unpleasant odor.  Additionally it worked very well at breaking up the carbon buildup and fouling from running extremely dirty tula ammo through my gun.  I used it on polymer and metal parts of my firearm without any adverse effects.  It definitely cleaned well, at least as well as the more expensive product I had been using.  I then opened the Ogre HP Gun Oil and gave it the sniff test.  It does not smell bad, and I would best describe the smell as somewhat like grease in wheel bearings.  I placed a few drops of it on my key lubrication points (please don't over oil your gun, no matter what type of oil you use).  I ran about 100 rounds through the gun and had no problems.  Afterwards I pulled the gun apart and found the gun was not bone dry and it appears as though the oil held up just fine, which I was pleased with.  The oil did not gunk, bind up, solidify or burn, which is also a good sign.

All in all, I was really happy with how the Enviroclean and Gun Oil worked.  Does it work better than any other lubricant or solvent?  I am not a chemist and did not perform any side by side tests of flash points or viscosity, but what I can tell you is that it functioned flawlessly in my real life test, and was much more pleasant to clean with than the high-odor Hoppes#9.  Incidentally if chemistry is your thing, there is biodegradability test results on the manufacturers web site.  If your nose is fed up with high-odor solvents, or your significant other complains about how you smell after cleaning your firearms, or you want something a little less caustic, try out these products from Ogre Manufacturing.

Episode 40: Training Outside the Box
The First 2016 Olympic Medal Went to America for Shooting