If you haven't heard of the Brooks Tactical AGrip join the club.  Even though I have been part of the ‘gun community' for quite some time, and I research a lot of products for my reviews and for students, I have to admit, this one was so far under the radar I am just now discovering it.  This grip product is not new; in fact, it has been around for over 20 years!  I'm kinda' shocked that there really is almost nothing online about this grip.  A couple of YouTube videos, and an old instructional video from the owner and inventor of the product describing how to install it.  You actually have a better chance at seeing videos of real-life aliens, than finding advertisements or marketing for this grip.  I don't even remember how I happened to stumble upon the Grip, but I am happy I did.

Here is a short video I prepared about it. My full written review is below the video. 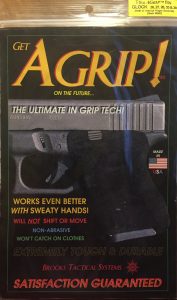 Brooks Tactical AGrip is an aftermarket wrap-around grip product that you apply to your firearm.  It is supposed to provide a better grip.  The product comes pre-cut to fit a specific gun model, and they make grips for a ton of different gun manufacturers and models.  The grip material is backed with an extremely strong adhesive.  I tested this product out on my Glock 27, but this is not just for handgun grips.

Brooks Tactical makes the AGrip for magazines, and you can also buy the material in sheet form, and apply it to something like the fore-end of a rifle or shotgun.  The black material looks like suede or velvet, and feels a little like it, but it definitely is NOT suede or velvet.  It is some sort of incredibly thin and durable material.  In the reviews I could find on the product, people just raved about it, and commented about how long it has lasted on their gun.  Some even wrote that they have had the same grip on for 10+ years and it still has not worn through!

What Makes It So Special?  With all the aftermarket grip products available, what is different about this material.  Let me first start by saying, when I was a police officer I tried Hogue rubber slip-on grips for a time on my duty gun and the ‘rubber textured' Talon Grips, for my off duty concealed carry gun (which was, and still is the Glock 27).  I am not a huge fan of the slip-on grips, I found they shift over time if you use it on a gun you carry or handle a lot.

The Talon Grips, I actually liked quite a bit.  I liked the feel it gave to the grip of my Glock.  I didn't really have any complaints with the Talon Grip, other than when the rubbery material got wet it was somewhat slippery.   And of course, now I added the Grip to my list of grips I have tested out.  I like the AGrip the best.  The reason I like it is the unique feel it has, it just feels so nice in my hand.  The grip material like I mentioned above feels a little like suede.  But where suede is slick, the Grip is not slick or slippery and actually locks onto your hand.

Not in a sticky, rubbery or abrasive way, and that is the beautiful thing about it.  It doesn't snag on clothing or rub your skin raw.  A claim that the manufacturer of the AGrip makes is that the grip actually gets BETTER if your hand is wet or slippery.  I was a little skeptical about this claim, but what an awesome thing if it were true.  Our hands can definitely get sweaty in hot weather, wet if it is raining, and if you carry concealed, who knows what may be on your hands when you need to draw your firearm and use it.  You, or the threat could be injured and bleeding, causing you to have super slippery blood on your hands, or working and have muddy or dirty hands.  A grip that could get better in adverse conditions would definitely be great.  I'll let you know in my conclusions, how the AGrip lived up to this claim.

Conclusions:  When I first got the grip I was shocked at how thin it really was.  I initially thought because it was so thin, it would wear through in no time.  When I applied it, I quickly realized that it 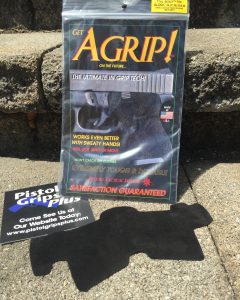 was thin, but not flimsy.  Applying it was straight forward, but it definitely helps to take your time and follow the directions, because when applying something like this you really want to get it right the first time.  The grip material wraps slightly up and under into the mag well, so I took an exact-o knife and used it to trim the material from the mag well.  This is when I noticed that the material was extremely durable.

I have trimmed my Talon Grips with an exact-o knife, and it sliced right through.  This AGrip material was completely different and was actually hard to cut.  I had to pull it slightly and hold it taught, then use the exact-o knife in a sawing motion to cut it through.  Even though I have only been carrying mine for about a month now, I have no doubt this material is going to hold up.  One thing to note about how the grip is installed, that initially had me a little worried, is that the grip does not have a hole cut out around the mag released and completely covers over it.  My initial desire was to cut a hole in it to expose the magazine release, but I wanted to test the design of how it is intended to be used and without modification.

So I left the grip alone and allowed it to cover the mag release.  I feared it would be harder to actually depress the release, but found absolutely no difference.  It released the magazine just as if there was nothing on it.  I also wanted to make sure that it didn't cause the magazine to be released inadvertently.  Once again, the material over the mag release did not cause any problems.

I spent at least an hour dry firing and drawing my gun with this set up to ensure it wasn't going to cause any magazine issues when I needed it the most.  I carry my Glock 27 every day and am religious about making sure it is always ready and functional because I have to bet my life on it working.  After trying to cause issues with the mag release being covered, and not being able to, I felt safe enough to take it out of the house and to the range.

Because the grip is so thin, it adds zero width to your grip.  This is important for those shooters who may want more grip on their firearm, but don't want to make the grip fatter.  A fatter or thicker grip is actually going to be worse for a shooter with small hands.  So in my opinion,  the thin material is a plus in this regard.  Because it is so soft, it just really feels different, in a way that other grips don't compare.

There are ergonomically great grips, and some really nice perfectly textured grip panels out there that make holding the gun feel great.  But, this soft material is different and really has to be felt to truly appreciate how nice it is.  I appendix carried the gun every day, with the grip installed for about a month before writing this article.  I fired the gun quite a bit on several different occasions, just to replicate real-life usage.

I loved the way my hand felt on the grip.  I don't think gear alone necessarily will make you a better shooter, that comes from applying proper technique, but I definitely had no issues holding the gun and felt it really stayed snug in my hand.  I had the fortunate opportunity to be instructing a class one day where the weather was in the upper 90's, I can only imagine how hot my gun was, while it was carried against my skin under my shirt.

I specifically took the opportunity to see if these very hot temperatures would cause the adhesive to loosen up and the grip to shift.  Nope, the grip was just fine and while I ran some drills the grip was rock steady.  Now, as far as it providing more grip to sweaty or wet hands.  I tested this in real life at the range, while I baked in the sun, and had sweat rolling into my eyes.  I ran my hands over my head getting as much sweat as I could and ran some more drills.

I don't have a scientific way of proving it provided MORE grip, but I can truthfully tell you, I had a super solid, non-slip grip as if my hand was bone dry.  I'm going to leave the scientific testing to Mythbusters, that is not my forte,  but I can confidently say, this thing works incredibly well, even with sweaty hands.

The only reason the AGrip isn't seen on more guns is just that it is not aggressively marketed and advertised, not because the product doesn't live up to its claims.  You can purchase the AGrip on the inventor's web page or one of the 15 preferred dealers.  I got mine through Pistol Grips Plus, which was great because they don't charge shipping, and I know we are always trying to save a couple of bucks here and there for ammo whenever we can!  Overall, this thing shockingly lived up to some pretty tall claims.  I don't think you can go wrong with the AGrip.

4 Responses to The Most Comfortable Gun Grip, You Never Heard Of [VIDEO REVIEW] AGRIP!