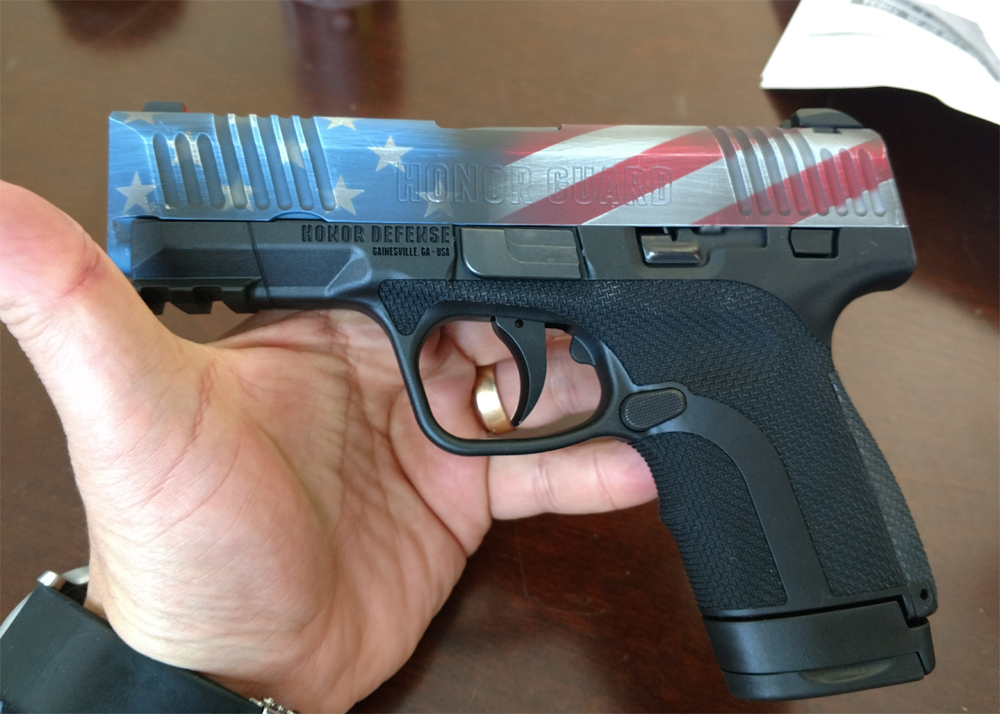 My history with the Honor Guard started off a little rough. In December 2017 other websites reported that the Honor Guard 9mm handgun from Honor Defense was not drop-safe. After the drama surrounding the P320 drop-safe issues I thought it would be a good idea to test it. So I purchased the Honor Guard from a local gun shop and Riley and I took it to the range.

Now it is worth noting that the Honor Guard had already submitted to and passed all the various industry standard safety tests including drop tests. There are some strong opinions (on both sides of the debate) concerning if this kind of drop test is really relevant or the potential for the gun discharging when dropped at just the right angle should even be a valid concern for people who follow proper gun safety and choose not to regularly drop their gun on concrete.

Regardless of how you feel about it, when we tested the gun back in December when dropped at just the right angle the firearm could/did discharge (test results here). In fact, it made me wonder how many other firearms out on the market might be considered not “drop-safe” that just hadn't been submitted to enough concrete slamming testing in order to prove it one way or the other. We interviewed Gary from Honor Defense on our podcast shortly thereafter and learned a lot more about the testing standards etc., (listen here). 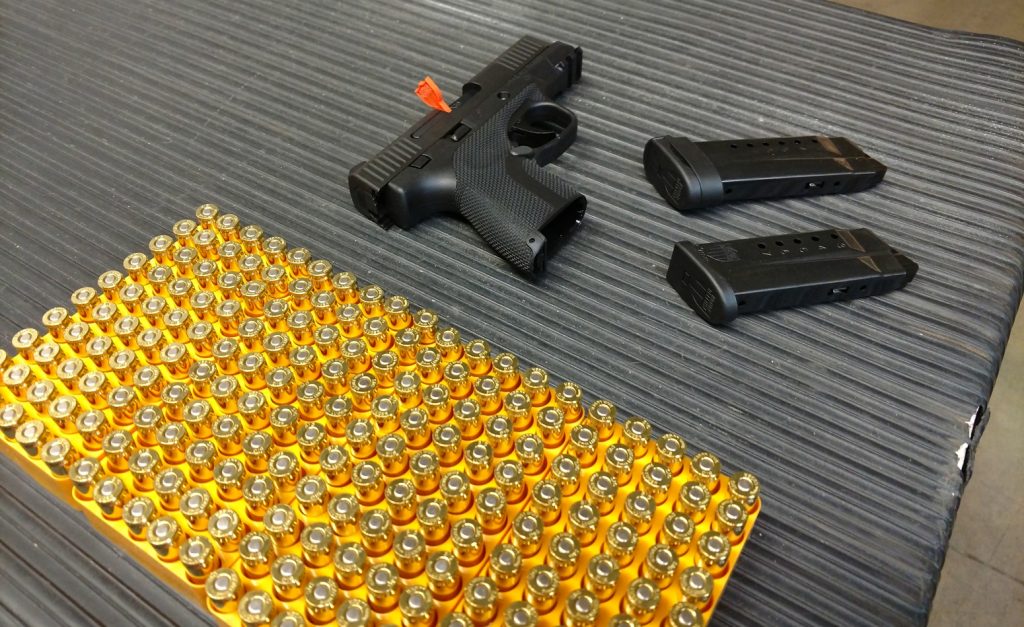 Our initial functions test with the Honor Guard in Dec 2017

So Honor Defense did the noble thing and issued a voluntary no-cost upgrade (details here) in January 2018 for those who do think this is a potential safety concern. My firearm not only was lacking the new upgrade but had been subjected to repeated dropping on concrete (about 25 times) which left it a little beat up. If I listed it for sale on GunBroker I couldn't have gotten away with “like new” as the condition.

So I contacted Honor Defense and had them repair the gun and perform the upgrade at the same time. It came back to me as good as new along with a cerakoted “American Flag” on the slide 🙂

Before testing the drop issue, Riley and I put 200 rounds through the firearm with only one malfunction which ironically was the 200th round. It was likely just due to the gun being super hot but either way, I would call that fairly reliable. So I was curious to see how that may have changed given the modifications of the “upgrade” done by Honor Defense.

I'm almost certain that the issues had everything to do with breaking in the gun, and it isn't uncommon with Cerekote painted guns to have a longer break-in period as sometimes there might be a little paint in places where it should not be that can be cleared out with normal use. Since my last 200 rounds of fire were all 100% malfunction-free, I'm inclined to think the light primer strikes were part of a break-in issue.

I suppose putting another few hundred rounds through the gun would be indicative and as I continue to use and test the gun I will return to this review and update accordingly.

Overall I like this gun. It certainly is easy to shoot and feels fairly good in the hand. It is accurate out of the gate and seems consistent in terms of point of impact. Some smaller guns like this one feel fairly snappy in the hand but the Honor Guard is very controllable and feels smooth in the hand.

The company has a lifetime warranty on all guns and boasts that every part is sourced and manufactured right here int he US by US workers. There is always something refreshing about dealing with a smaller American business that is committed to quality and customer experience.

Where This Gun Really Shines

The Honor Guard has a lot of features that comparable guns lack. For example, it comes with an ambidextrous mag release and slide catch. No trigger pull needed for dis-assembly. Front slide serrations are standard and I like the contrasting front and rear sights.

The gun comes with a 7 lb trigger which feels crisp and easy to operate and also includes both a small and large backstrap.

The gun comes with both a 7 round magazine and an 8 round magazine with an extension that for me is a must in this style of gun. In that regard, and in many others, the Honor Guard often reminds me of the S&W M&P Shield. In fact, laying them side by side and holding them in the hand really brings home how many things are similar though the Honor Guard has a slightly larger grip which does feel better in my hand and makes the gun feel easier to control. 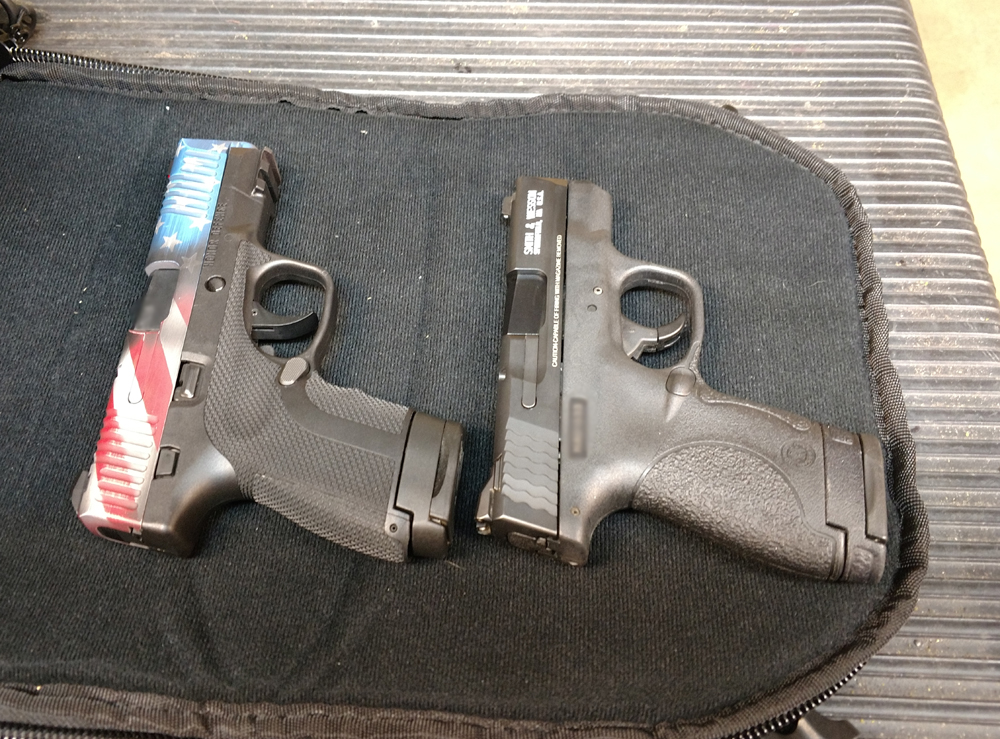 The Honor Guard comes with 3.2″ and 3.8″ barrel length options. With the longer barrel length, you also get a functional rail for accessories like lights and lasers which is really nice since a lot of other comparable guns don't have that option either.

Compared to an M&P Shield or Glock 43 (somewhat comparable in size and capacity) the Honor Guard is very affordable. You can get a new gun between $400 to $475.

I think I would point out the value of owning an American made product with a lifetime warranty. That is a big deal to me.

I've never found a gun that I thought was perfect. All firearms make concessions just by the nature of firearm manufacturing. In other words, making a gun that has every positive attribute is impossible. Further, decisions have to be made based on the price point the gun is going to sell for amid other things. So don't take it too harshly when I point out places where this firearm can improve.

First, this gun can be difficult to find. One of the trade-offs of supporting a smaller company that has a 100% made in America gun with American sourced parts is that you may not find one on every shelf of every gun store. I had to call about 14 gun shops (starting with those closest to me in my Denver suburb) until I found someone that had an Honor Guard in stock. If at first you don't succeed check GunBroker or just buy directly from Honor Defense.

The trigger feels great to press, but the reset is long. Not super long but longer than about any gun I regularly carry as part of my EDC. When I tested the gun with rapid fire I was short-stroking the trigger a lot at first. Like anything else you can train this and it shouldn't be a factor once you are used to the gun but this would probably be one thing I would recommend Honor Defense focus on for a generation 2 pistol.

The slide stop is a little too flush for my tastes. I like the stock slide stop on my Glocks, M&Ps, and Sigs. Never felt the need to replace them with aftermarket parts that made it easier to find and hit them during a reload but the Honor Guard slide stop could be made with just a little more to get my finger onto. I love that it is ambidextrous (love all you southpaws out there) but I think putting a little more to it would be good.

Lastly, in a Post-P365 world, I now look at all single stack guns including the Honor Guard and wonder, how much wider would that grip have to be to make this a double stack gun? This isn't something that specifically is a problem with the Honor Guard but I think a lot of single stack compact and micro-compact gun manufacturers need to look at a model that does nothing more than expanding grip size to accommodate a double stack magazine.

All around I think the Honor Guard is a good choice for concealed carry. You get a lot of great features for the price and you support a true American business and American product. Have you ever shot one of these? What do you think about them? Let us know in the comments below.