Let me start by saying it's not that I didn't have respect for PSA before, because I did. What I am saying is that I now have more respect for them after having the chance to tour their operation. Let me tell you why.

As some of you know, PSA recently had a few select media members down to their facilities in South Carolina. It was a no brainer for me to go for our team, because I can throw a rock and just about hit the SC border.

Okay, maybe I'm not that close, but I was only about 2 hours or so from where we all met up in Columbia, SC. I recorded a lot of video while at their facilities, but sadly most of it didn't turn out well because we were on the manufacturing floors in multiple places, and the microphone on my phone just didn't cut it.

So, why do I respect them even more now?

Let's start with the manufacturing process.

I was once under the impression that PSA was just an AR-15 assembly plant, piecing together parts from the bigger companies out there. I was wrong. And, I think this is a huge misunderstanding among many gun owners.

In fact, I learned that PSA has brought just about every aspect of the manufacturing process under their roof, with different sister companies making parts for their guns. They even have a sister company making higher end race guns, called Lead Star. Here is one of the Lead Star rifles, it didn't even feel like there was something in my hands.

This Lead Star rifle, made in house by the sister company bearing the Lead Star name, was so light it felt like a feather.

Anyway, the company bringing all aspects of the manufacturing process in house is great news because if something is effed up, they can't blame anyone but themselves. In the same vein, if they're getting only a small amount of returns because their people are running the machines on point, then only they can take the credit.

As an added bonus, because everything is in house, with no middlemen, costs are driven down. A second added bonus, is because they control every aspect of the manufacturing process, they can produce as many guns as they like.

Some of the production numbers we heard that week were staggering.

Ferrous, the sister company milling out the upper receivers, currently produces about 1,000 each day. And they're getting ready to increase production again by adding more machines.

DC Machine's barrel QA panels. Once something starts to look like it's going out of spec, they replace the tool being used.

I remember at one point the barrel guy, who apparently used to work at Daniel Defense, telling us that they make 2,000 barrels a day with less than a 1% return rate.

That is one day's worth of manufacturing over a couple shifts. That's a lot of barrels. In fact, chances are good that they're the biggest barrel manufacturer in the country, and they've been making barrels for about 15 years.

DC Machine is PSA's barrel maker. According to one of the guys, this was a company originally started by Jesse James and the DC stands for Death Chopper.

I remember hearing at another point them telling us that they ship 7,000 orders each week. I'm not sure how many of those are completed guns, but that's a lot of orders.

There are a few different sister companies all falling under one roof, you can view them here. 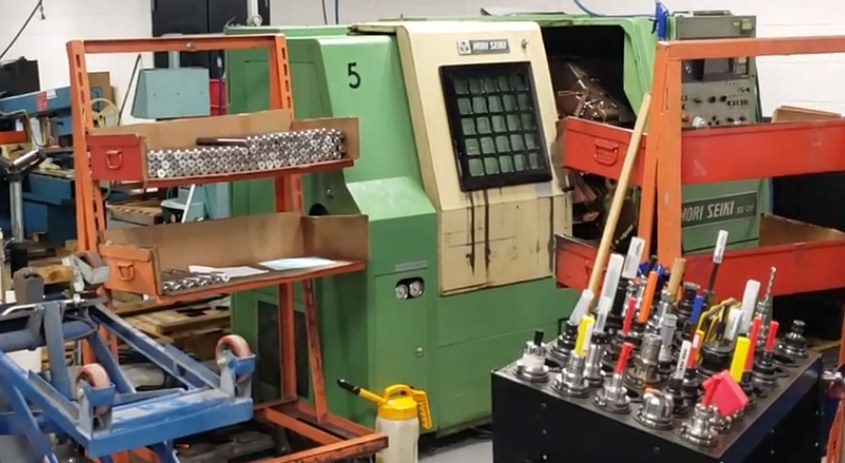 Even better, those 7,000 orders don't just make themselves. Each part, each gun, each idea is pieced together by one of their ~1,000 employees. They've got people to put stuff together, shoot guns to ensure function, treat parts, run manufacturing equipment, pick and pack parts, handle customer service, and handle ideas in the engineering phase. Which, ultimately, brings me to the next point.

They have an engineering department that consists of three people. They've got a CAD guy who does all the drawing and two dudes whose job is to just come up with ideas.

The way they explained it, is one engineer is the brains behind their AR-15 patterned rifles and the other is all about the AK platform. By the way, I had the chance to shoot the AK-V 9mm AK47, and it was fantastic. (That link takes you to my write up about it.)

After having the chance to talk to the engineers a bit, I can say that they've got some excellent things coming down the pipe that I cannot comment on. I saw things that I SOOO want to comment on but have been sworn to secrecy.

All I can say is that PSA seems to be very good at listening to what their customers want and bringing it to fruition. Stay tuned because when I can tell you, when I do get the green light to tell you what I saw, I will.

Here's another Lead Star gun we got to shoot at the 300 yard range.

PSA has some of the best prices on AR-15s in the industry. The reason why they can do this, from what I learned, is because they've brought just about every part of the manufacturing process into their own house, through different sister companies.

Therefore, instead of sourcing components like everyone else has to do, they're just assembling their own parts that they've made. Because they've cut the middleman out, they don't have to give up a portion of the profit to him.

In turn, that means they can pass the savings on to us. The only components they're not making in one of their companies, are springs and a few other small components.

But, one of the best things to me, is their goals which really resonated with me. Their number one goal, and I'm paraphrasing here, is to sell so many guns that it's impossible for the government to do a gun buyback.

I don't know about you, but that sounds great. If you want to participate in that goal, you can check out PSA's website here.

Episode 352: Open Carry, Good?
What Ever Happened To Glock and Browning’s Love Child, The Hudson H9?

3 Responses to My Newfound Respect For Palmetto State Armory