Join Our Newsletter
Shop Our Store
MAIN MENUMAIN MENU
By Eve Flanigan on December 26, 2018 in Gear 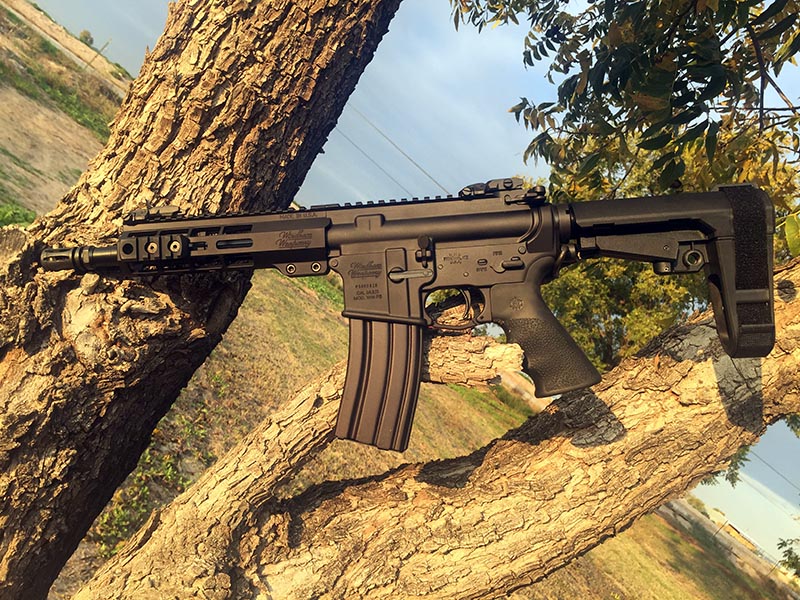 At less than 25 inches overall, this is a great defensive or recreational pistol.

There’s a lot of truth to the adage “I carry a pistol so I can have something to fight with until I can get to my rifle.” The superior ballistic performance of a rifle, including self-defense applications, is undeniable. But as the adage implies, rifles come with their own issue—they’re so darn big.

Windham has a great legacy of American gun building, as it sprung up from the Maine community that once was home to Bushmaster, now of New York. Former Bushmaster employees renewed their enthusiasm for their craft in an employee-driven effort to establish this relatively new company. Windham makes a reliable AR, and has expanded their offerings to include five AR-platform pistols.  The RP9SFS-7 is a fine example of the brand.

New to the model is the SBA3 brace by SB Tactical. A different SB Tactical brace is shown on the product listing. The SBA3 is one of the most compact around, and has a receiver for a flush cup attachment. This brace also telescopes, offering a bit more stability for some firing positions. By itself, the SBA3 retails for $129.95 from Windham Weaponry.

Of course, the overall length and barrel length of the RP9SFS-7 means that shouldering it could be seen as an NFA violation, so that’s not among the ways to deploy this “pistol.”

Not for this writer, anyway. 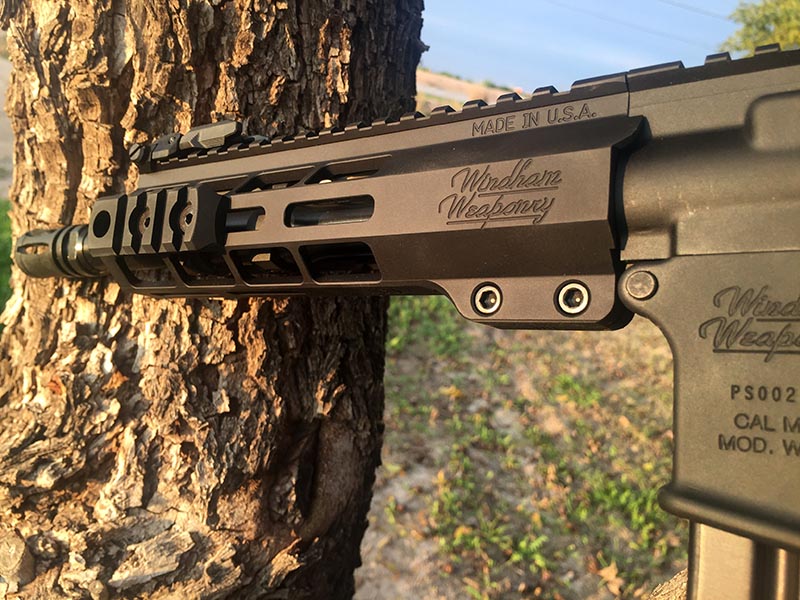 A bit of rail makes room for a light as well as provides an index point for safety.

Forward of the brace, there’s a handy swivel sling loop for attaching the included single-point sling. 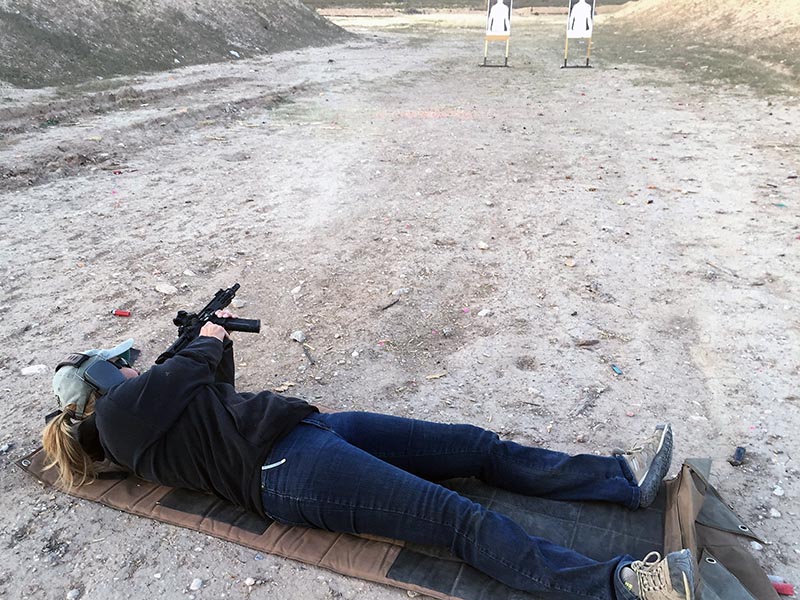 Some improvisations necessitated by federal rules can be fun and practical.

The receiver is made of 7075 T6 aircraft aluminum with a roomy aluminum trigger guard. The safety is a traditional two-position one with a right-side hashmark indicator. The trigger is milspec but better than many, with minimal travel and a pull just over five pounds. There’s a nice rubberized Hogue pistol grip. The charging handle is interesting in that it’s visibly narrower—by 0.25 inches—than normal. This complements the compact profile of this pistol and makes it a tad easier to store and retrieve from tight places.

The barrel is just nine inches, topped by a traditional A2 flash hider. It’s a medium-profile barrel constructed of 4150 chrome moly vanadium 11595E steel. It has M4 Feed Ramps. Around it, the flattop hand guard has more Picatinny rail than a short gun needs, but the space is well used with Kriss brand flip-up front and rear backup sights—like the Hogue grip, this is a very nice upgrade. 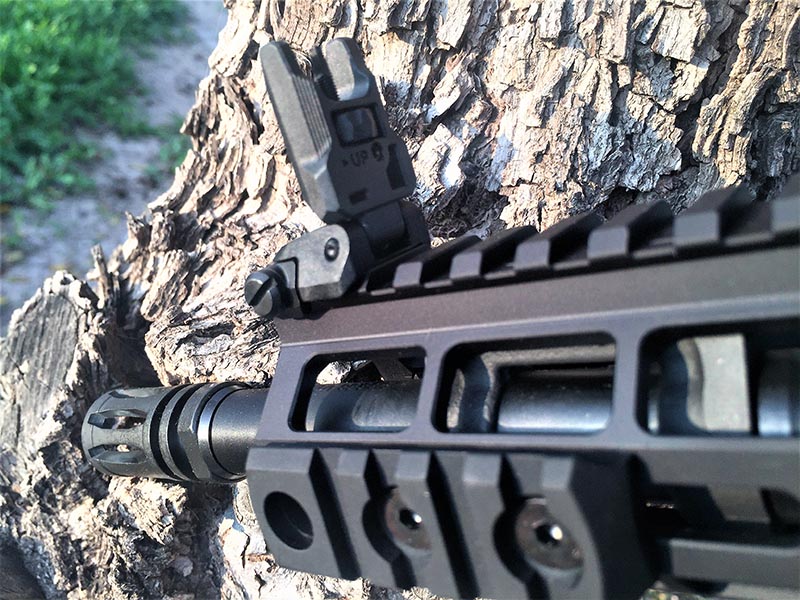 The guys at Windham thought of everything. In the M-LOK slots at 3-o’clock on the handguard is a short length of rail, perfect for mounting a light and also functional—it gives a tactile index point for the support hand, and as such offers a measure of protection from getting one’s hand too close to the heat of muzzle blast. There’s matching M-LOK on the right to which the rail can be moved.

As far as this reviewer is concerned, those features and accessories are nice, but mean nothing if the pistol doesn’t work. It does not disappoint in that department either! As of this writing, we are at approximately the 500-round mark, the only maintenance being a little oil spread on the bolt through the ejection port. Though it’s been in dusty conditions throughout the test, it’s never failed to cycle. This pistol gets high marks for reliability.

While it doesn’t make sense to do an accuracy test on a firearm that I have not shouldered, I’ve run the RP9SFS-7 enough to be confident it’s as accurate as any typical AR. Equipped with a red dot sight to make focusing easier, it consistently rings the CTS 10×17-inch steel tombstone at 185 yards. 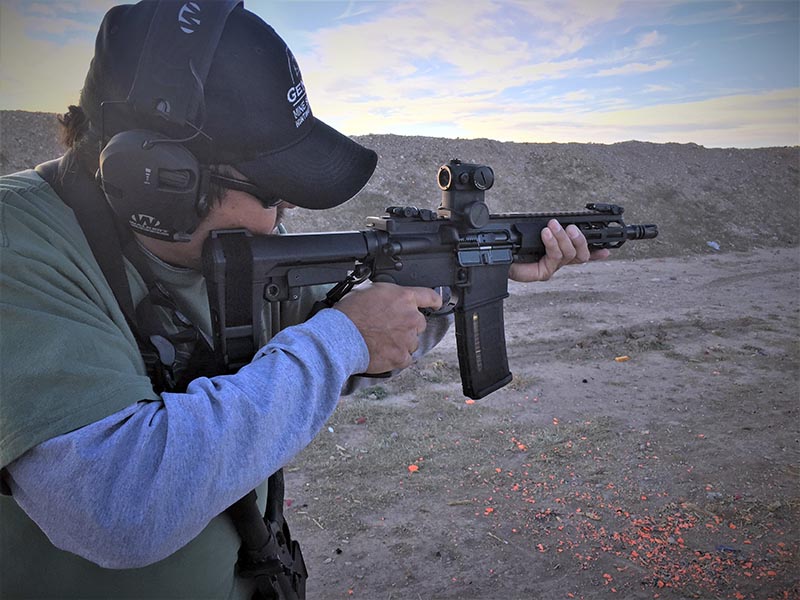 W..J. shows the use of a cheek weld as a primary form of support.

Firing such a pistol is technically meant to be done holding it single-handed, with the brace attached to the forearm or wrist. But that’s about the least responsible way to fire it, especially with the forend unsupported, as it makes for the least accurate shooting around. However, there’s there has never been any talk about making it illegal to take a cheek weld on the SB Tactical brace.

Doing so makes shooting the pistol more accurate and fun. Being creative in your practice can spur the discovery of shooting methods that are actually practical for small spaces.

For example, a recent range session found me shooting across my chest in the supine position, with a low table beside me representing an automobile or low-clearance furniture. Freed from the thought of tucking the butt of a stock in my shoulder pocket (because you know, ATF), I found it quite easy to hit at distances up to 175 yards in this improvised position.

Another favorite was to sit and brace the sling against my neck with the pistol at arm’s length—comfortable even with a nagging wrist injury thanks to the sling’s added support. 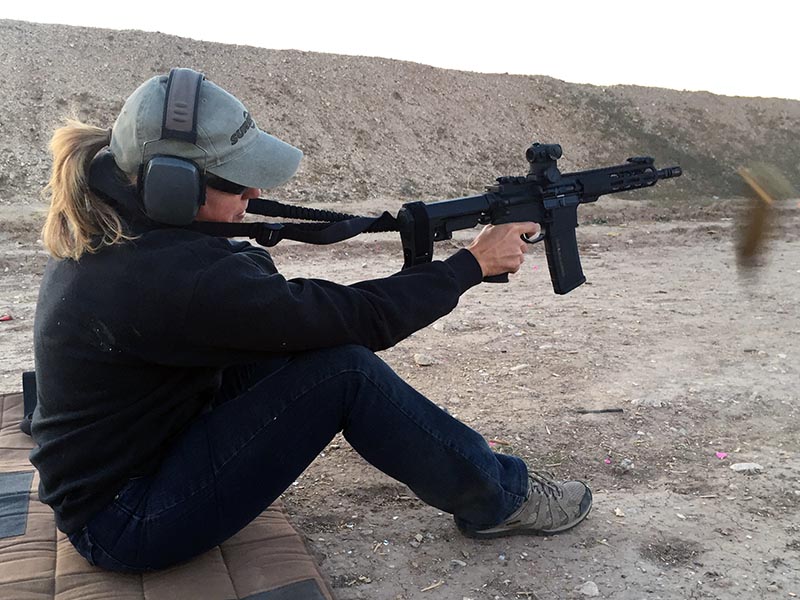 Recoil control is compromised with this platform, but accuracy is quite good!

Guidance for the legal use of pistols outfitted with SB Tactical braces can be found on the company’s instructional video.

Outfitted with a red dot and light, the RP9SFS-7 will make an ideal companion for those who want more range than their handgun can offer, but still need a compact firearm. And owning a Windham Weaponry product is to hold a bit of the American Dream—a symbol of resilience and pride, with a lifetime transferable warranty.

While you may need to tattoo the name of this pistol on your hand to remember it, you won’t forget its great features and performance for a reasonable retail price of around $1,000.

Capacity:  Ships with one 30-round magazine