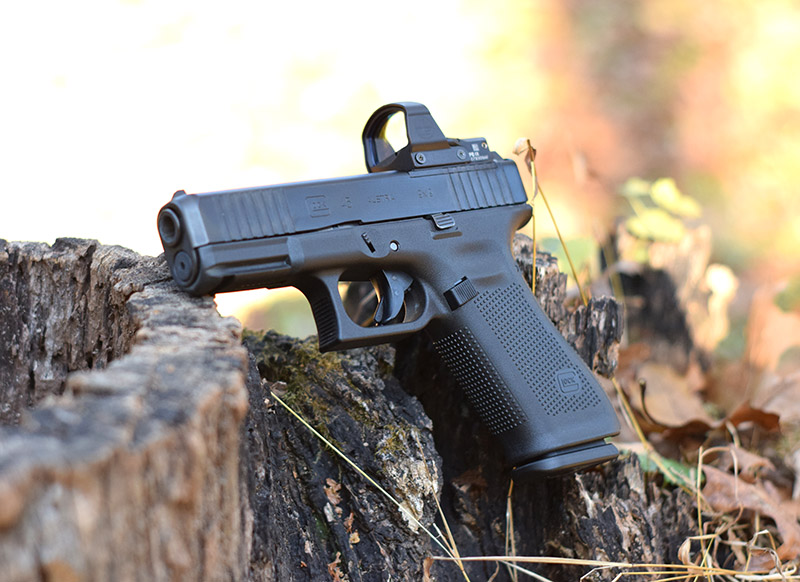 If there's one word that is synonymous with Glock, it's reliability. Other people, like Glock themselves, have a different word they like to use: Perfection. While I use their chosen word sparingly when describing anything in life, I can say that the 9mm G45 is a reliable pistol, excellent for self-defense or just a good time at the range.

The Glock 45 MOS (Modular Optics System) is a crossover pistol, meaning that it has a full size grip that holds a 17 round magazine, and a shorter, compact-sized slide that encapsulates a 4.02 inch barrel.

The cut down slide and barrel with the bigger grip is meant to help the gun conceal just a bit better while maximizing shootability. After running about 800 rounds through this G45 MOS I can say that it does shoot very well.

I'd hate to bore you, but it didn't malfunction once after running a few different kinds of ammo through it to include Blazer 115, SIG V-Crown Hollow Points, and a few other cheap brands. 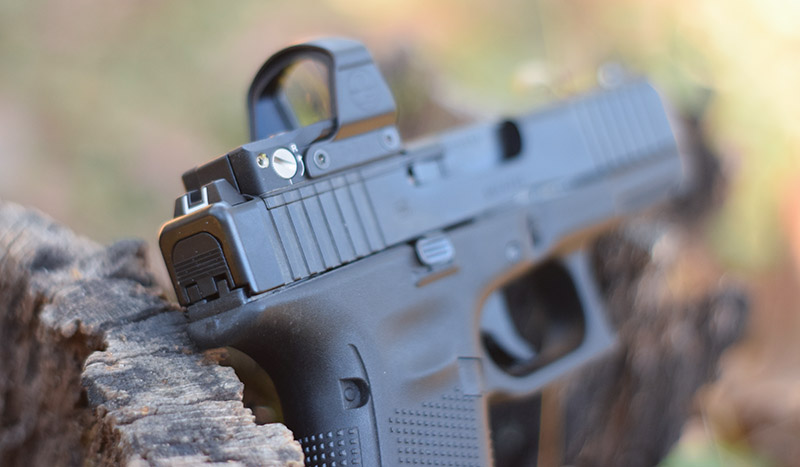 I started my time by putting a couple hundred rounds through this gun without the optic installed to make sure that the gun is accurate both with the optic, and without. I'm sure most people rush to mount their chosen red dot, but I took my time.

I did this because I know someone will buy one of these guns with the intent of buying an optic for it, but due to the inherent high cost of a good optic, will have to carry it without one for a while.

Here's the pistol without the optic on it. Simply remove the plate, figure out which of the included plates you need for your optic, and mount it.

The pistol shoots great if you want to shoot it without the optic, and handles just like you'd expect.

Therefore, if you think there is a chance you'll want an optic later, buying a G45 MOS is a good idea because you can still defend yourself with it and carry it on your body as you anticipate purchasing and installing the optic.

By the way, the red dot I used for this review is the Leupold Delta Point Pro. A review on this optic will be forthcoming, as well.

I was very worried at first about the installation of the red dot because I'm not one to change anything on my guns. Not once have I ever swapped a trigger or even installed aftermarket sights on a gun by myself. But I have to say that it went smoothly.

Glock makes it super easy to switch just by figuring out which plate you need, removing the stock plate, and screwing down the right one. Zeroing is something I'll cover in the Leupold review. 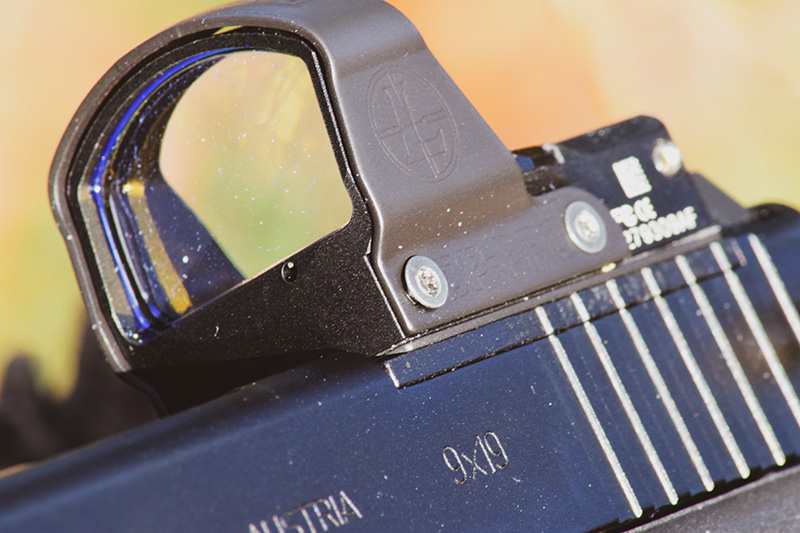 With the finger grooves removed for Glock's latest iteration of pistols, the Gen 5, the G45 MOS fits my hand like it was meant to be there. I have massive hands that are usually the biggest in the room, and I can get my whole hand on this grip.

As you can imagine, this really helps the pistol stay on target because more fingers on your gun are better than less, in terms of recoil management.

Something I thought was a nice touch on the G45 is the flared mag well. I'm a huge fan of stacking as many positives on my side as possible, and even just something as small as a flared magazine that may help me reload under stress during a battle is appreciated.

Honestly, this is something I wish more manufacturers would do. 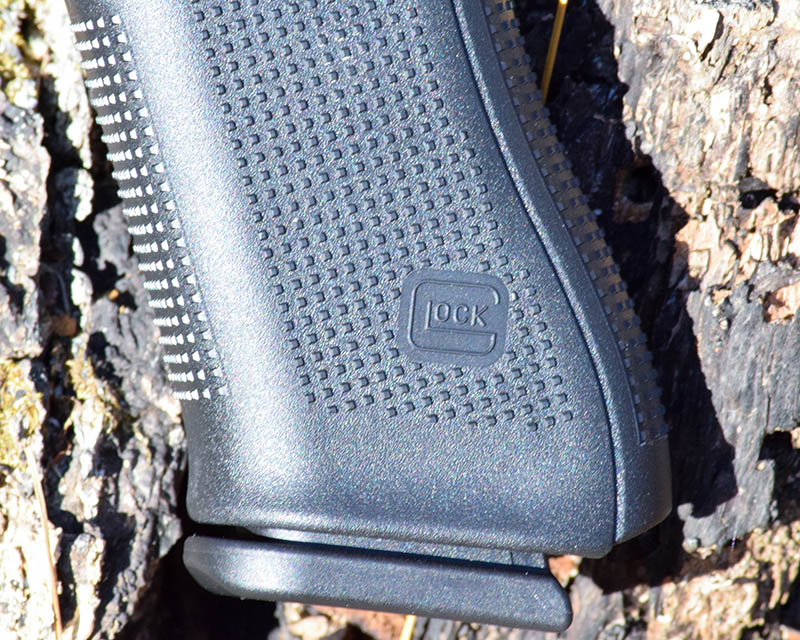 Another feature I'm a fan of that's a recent entry for Glock's pistols are the front slide serrations. Again, not the biggest deal, but I want to stack as many things on my side as possible and having an extra touch point for getting the gun back into action can only be seen as a good thing.

At first, I racked the slide by the rear serrations as I normally would before I put the optic on. After it was on, I found myself either going to the front serrations or going to the red dot itself.

You can notice the muzzle of the G45 MOS below, with the front slide serrations. 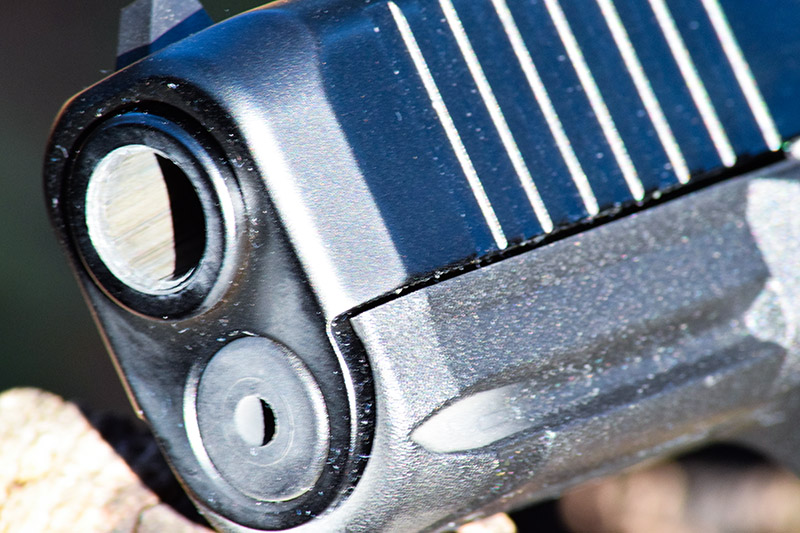 The trigger has the blade safety other pistols do, but this trigger feels good. I'd call it somewhere in the neighborhood of a 5 pound pull with a crisp break and a clear improvement over previous Glock triggers (to me, anyway).

Here is an up close and personal look at the trigger and blade safety: 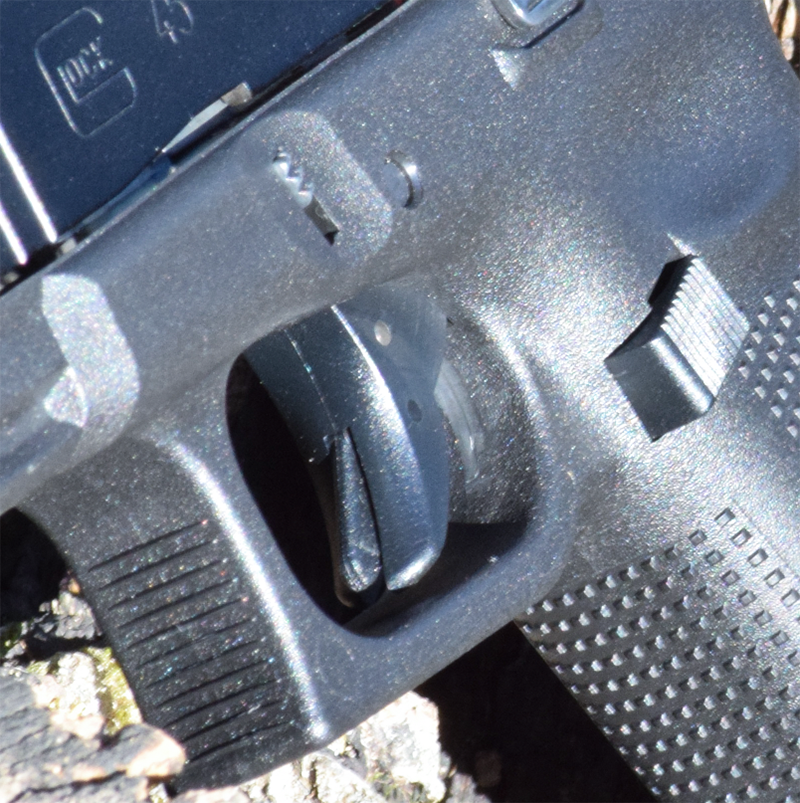 Also notice the magazine release which is reversible and probably my only gripe about the G45 MOS. I wish it stuck out just a bit more so I didn't have to adjust my grip to eject an empty mag, but such is life.

I do want to point out this is a problem I have with most guns, and I understand why this one is the way it is. If it stuck out any further the dimensions of the gun effectively change from having an overall width of 1.34 inches to just to a bit bigger.

While on the topic of dimensions, they are as follows from Glock's G45 page: 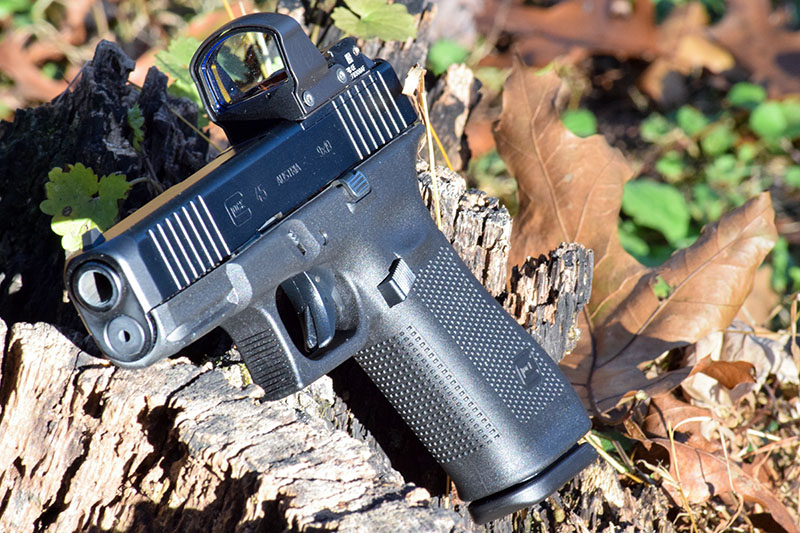 Other great improvements included with the G45 MOS are the modular backstrap system, the Glock Marksman Barrel, and the nDLC coating.

Overall, I think the G45 MOS is a great gun. It shoots and handles great with its full size grip and can be used in either configuration. If you're on the fence about a red dot and may move in that direction in the future, this is a great, shootable option for you until you get to that point.

Here are a few more pictures that I wasn't sure were to put inside the actual review: 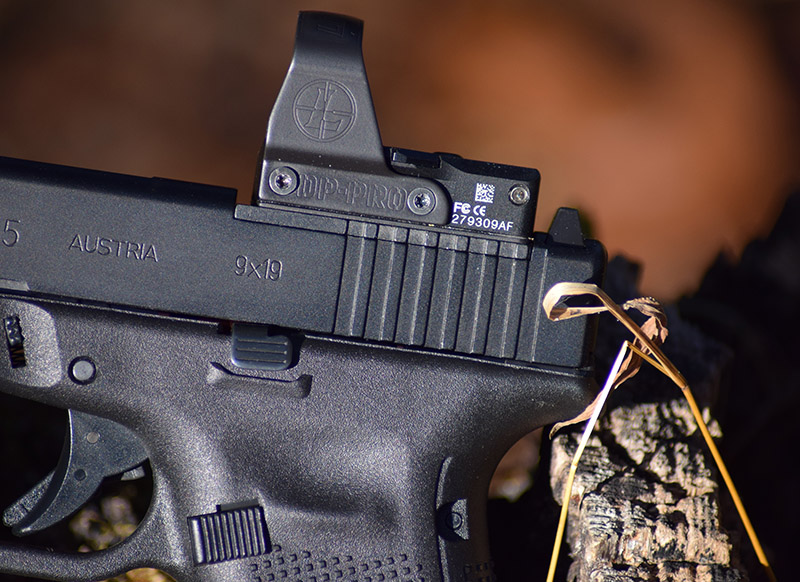 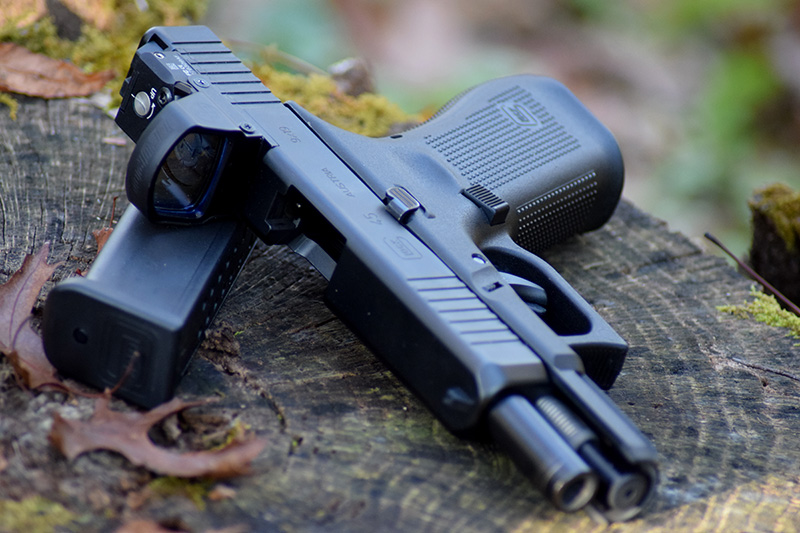 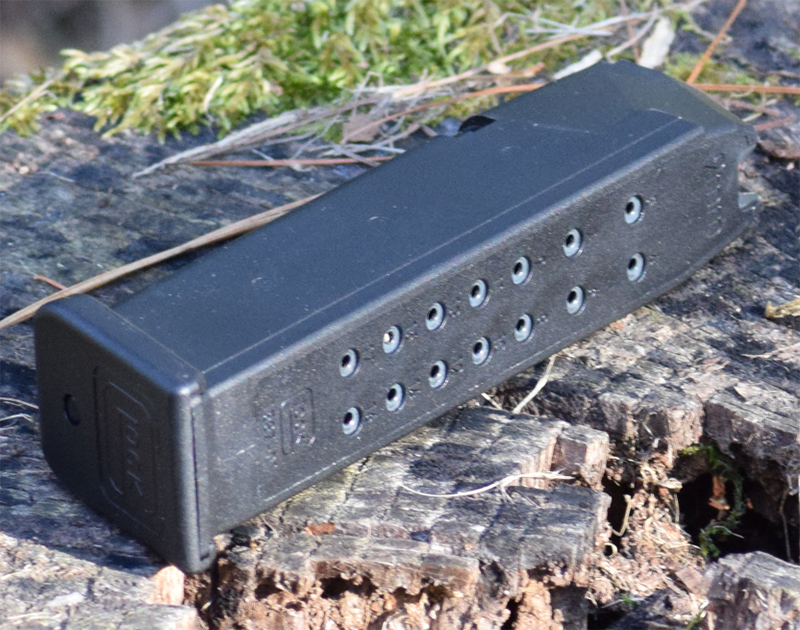 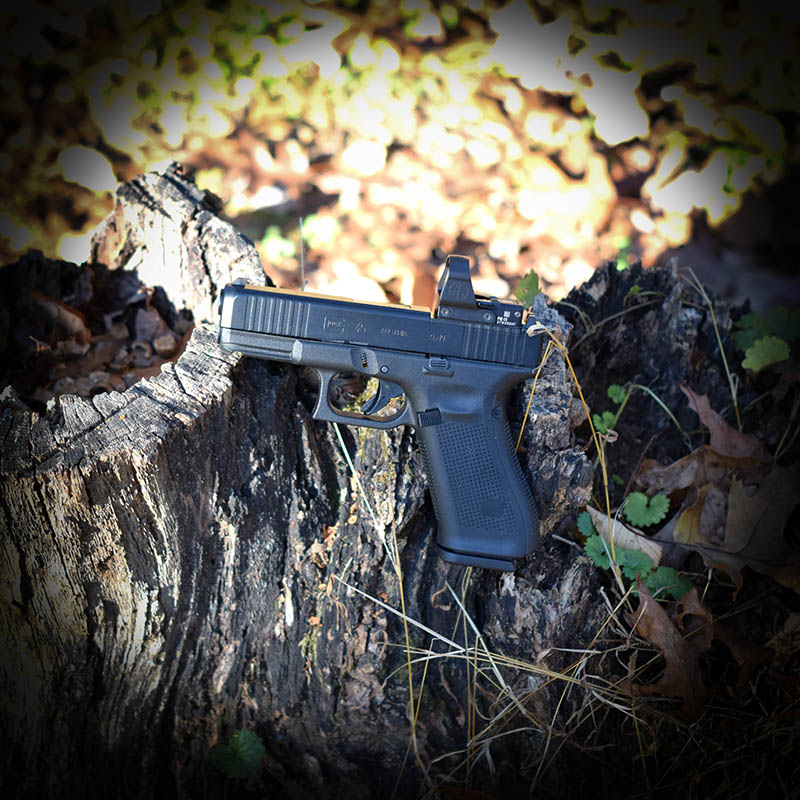 Traveling With Your Gun: 3 Tools I Can’t Live Without
Episode 364: Reasons to Get a Permit Even With Constitutional Carry