Join Our Newsletter
Shop Our Store
MAIN MENUMAIN MENU
By Eve Flanigan on October 5, 2018 in Gear 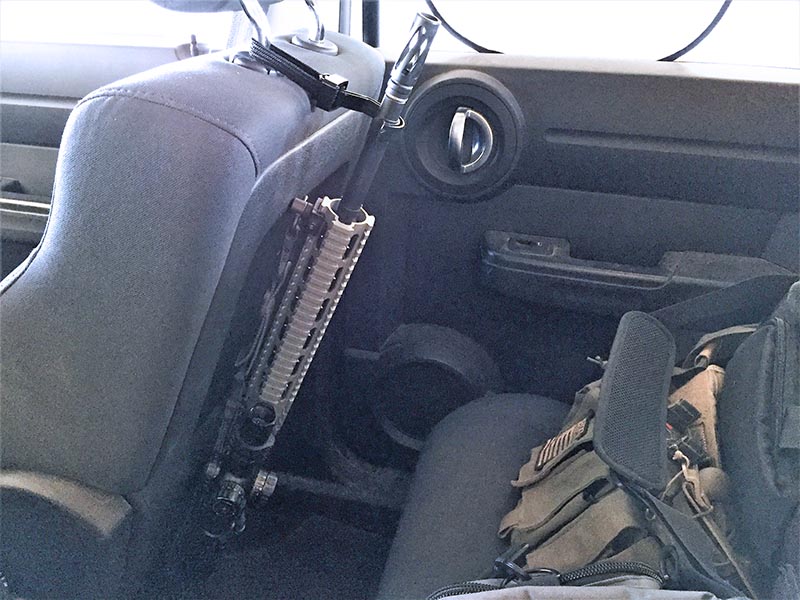 Matching the angle of the gun to the seat back stabilizes the setup.

In the gun and gear reviewing part of my life, sometimes I test gear, make comments, and move on. Other times, a test product becomes part of my regular routine, and I wonder how I ever did without it. Such is the case with the Snap Rack, a relatively unknown, and eminently useful device for carrying a long gun in a motor vehicle, so long as said auto has post-style headrests. Here is my experience so far with the device, along with some insights about installation.

The Snap Rack is the brainchild of Jason Wilson, known for his work as the founder/owner of Lucid Optics, in Wyoming. This product is a bit of an oddball in the Lucid Optics line, but stands on its own merits.

It’s a simple device. In the package are three pieces—a sturdy plastic hook with an unusual flat open end, a piece of plastic in the shape of a flattened square, and a flat strip of black elastic, about eight inches long. Light colored product is shown on the Lucid website and video; that’s for clarity.

At first glance, it doesn’t seem these three little pieces could do much. Installing the device is relatively simple, though it wasn’t exactly easy in my SUV, which has a headrest that’s on posts but not removable. 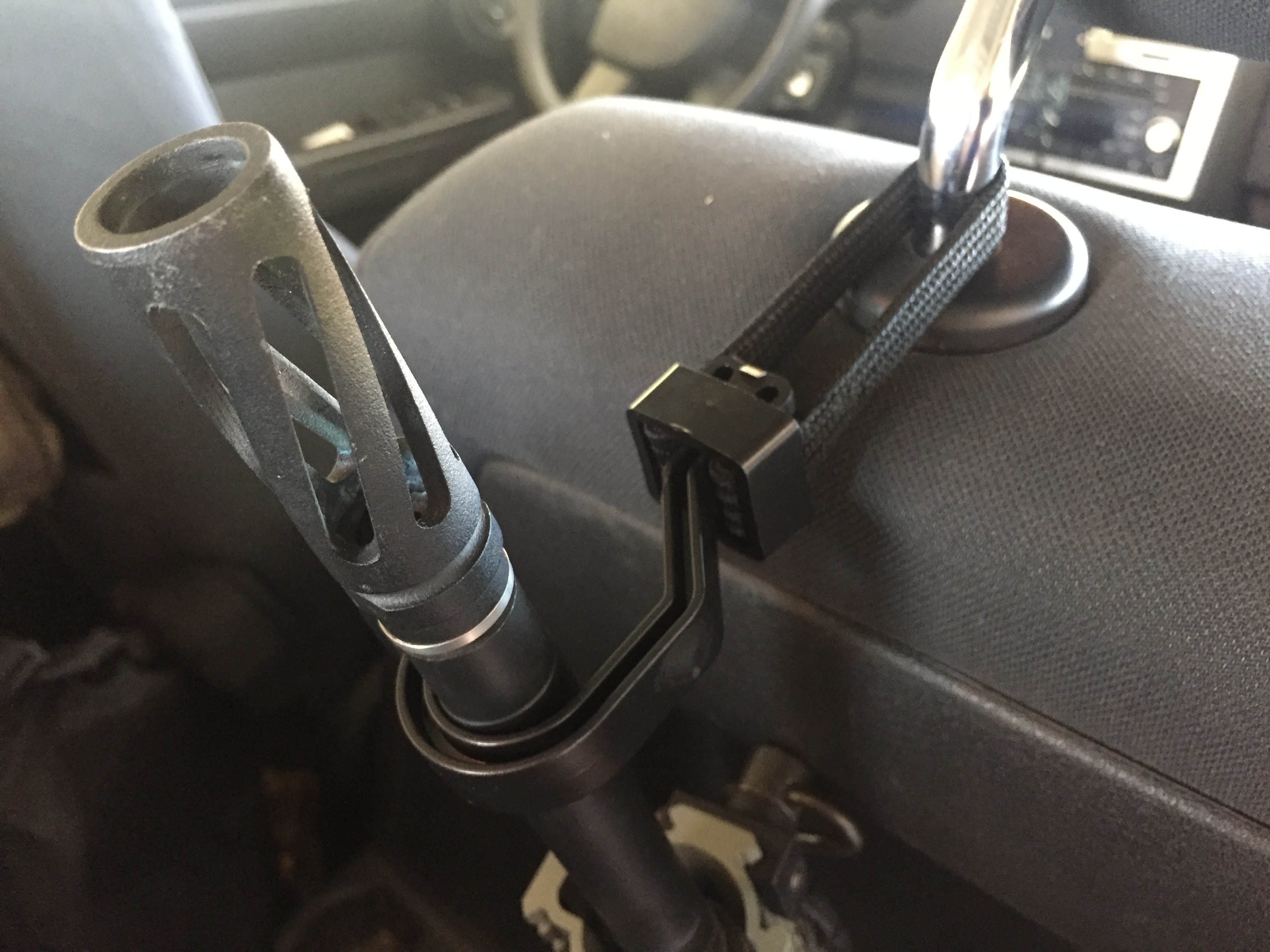 Tension on the elastic band keeps the rifle from moving in transit.

Installation begins by threading one end of the elastic into the base of the hook, where there are teeth to hold it. I made the mistake of doing this on the open side of the hook first, which is easier than the side partially blocked by the hook’s convex curve.

Once the elastic is secured, the square of plastic is threaded over the hook and onto the base, squeezing the elastic tightly so it can’t be dislodged. The package instructions say pliers may be needed here, and they were.  With two audible snaps, the Snap Rack was finally in place.

Doesn’t seem like installing a plastic hook on a headrest should take 20 minutes, but it did. That counts the time to fetch tools. Though my multi-tool is always in the SUV, bigger pliers made the final step easier.

With one end of the elastic secured, the butt of the long gun is placed on the rear seat floor. Taking Wilson’s advice, I matched the angle of the rifle to the seat back, and snuggled right against the seat back, rather than setting it upright. It was necessary to extend the collapsible stock to its third-to-shortest position in order for the barrel to reach the hook.

With the rifle in place, I stretched the elastic around the other hook end, marked the point where a cut was needed, trimmed it, and began the process of stuffing the end of the elastic into the tight side of the hook.  A flat screwdriver turned out to be the ticket for pressing into the hook where my fingers couldn’t.

For driver access, the Snap Rack is installed on the inside post of the passenger side headrest. Passenger access uses the inside post on the driver’s seat. The open side of the hook faces center.

With the AR in place, I tested out the device. The reason for the funny-shaped hook end was immediately obvious. Reaching behind the passenger seat, I wrapped my fingers around the barrel and with my thumb, flicked the Snap Rack off. The rifle was already in my hand! 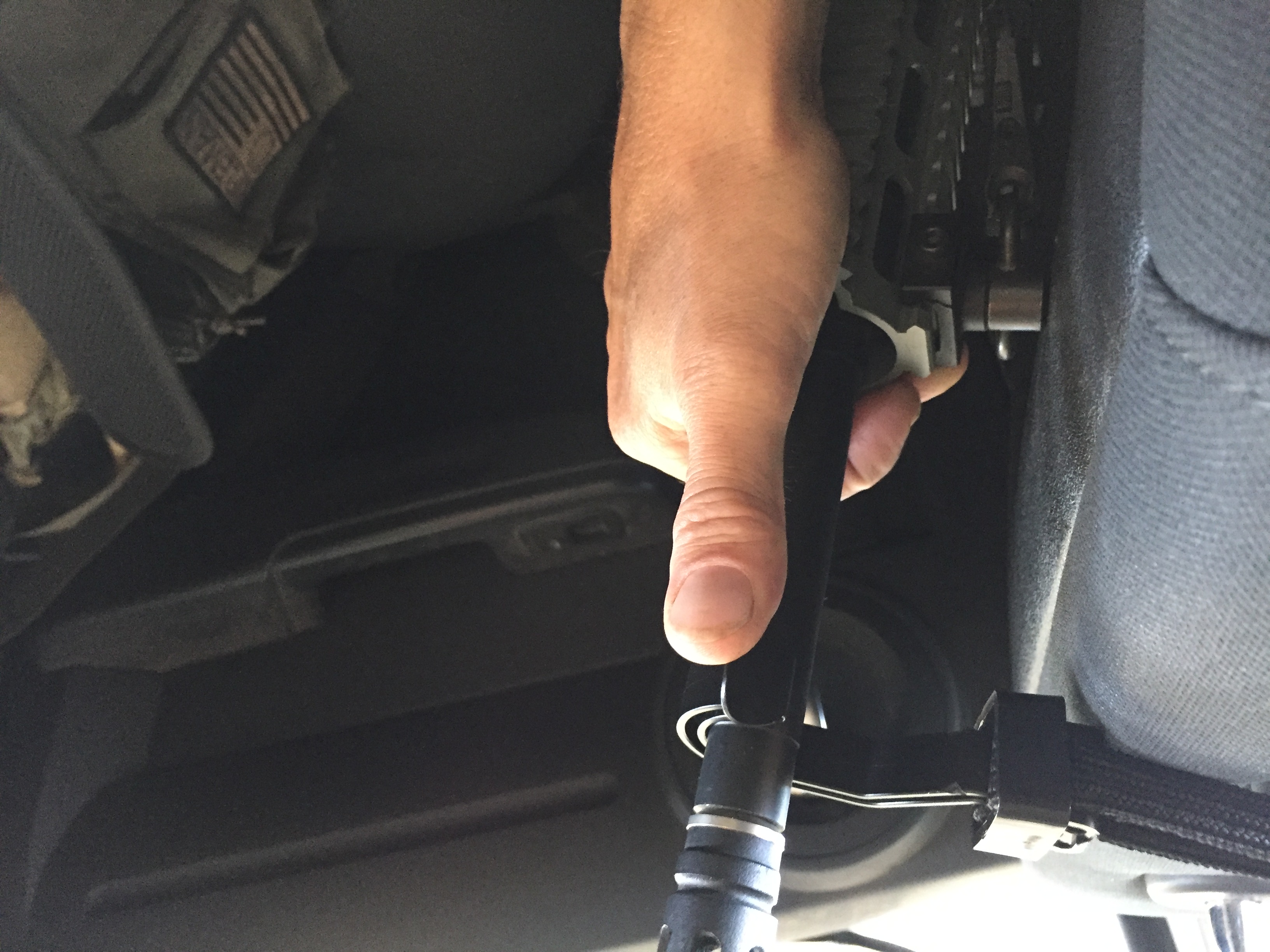 The rifle is already in hand before the device comes off.

Even with the stock a bit extended, and in a compact vehicle, I am able to get the AR into action, though not with a perfect cheek weld unless the window’s open. The transition from gun-in-storage to aimed and ready is fast.

Day to day, a jacket rides over the top of the muzzle, wrapped loosely around the receiver to shield the gun from the view of nosy or thieving types. It’s easy to toss the jacket to the floor or backseat just before releasing the rifle, and neither of these motions requires actually looking at the gun. An advantage to the stock position is the muzzle is level with the top of the seat, and it appears the jacket is just hanging from the seat. In-cog-neat-o! 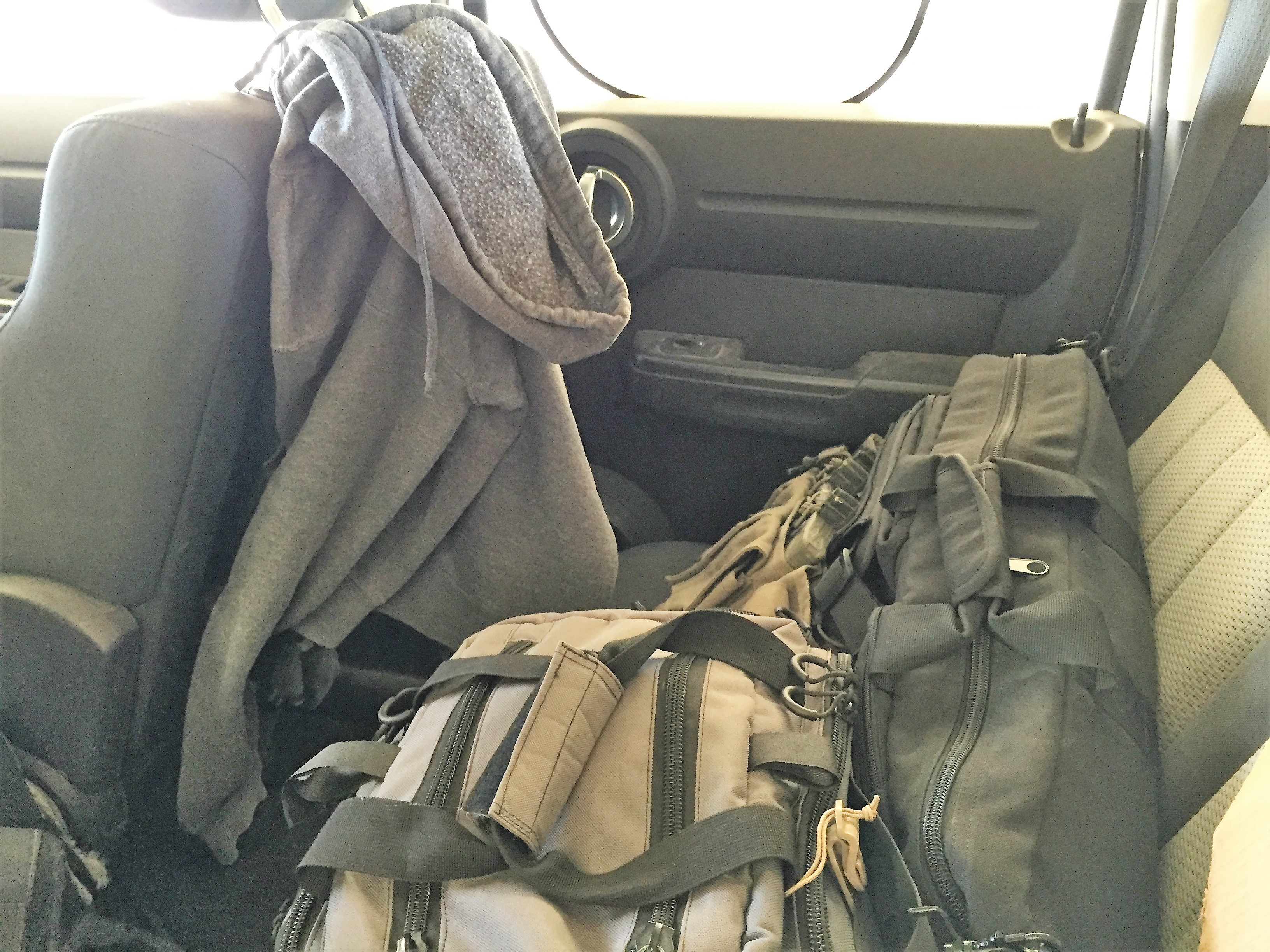 A rifle is right at hand its just not visible.

A 20-round magazine makes maneuvering the AR into the front seat easy while still giving me a decent supply of ammunition that’s ready to go. For safety, never transport a rifle with a hot chamber in this device.  It’s just common sense!

I like to do what many police agencies have as policy—the rifle rides with the bolt closed on an empty chamber; magazine inserted. While I’m a big advocate for most concealed carriers to habitually carry with a hot chamber in a safe holster, a long gun that’s not on your person is another matter entirely.

And of course, nothing here is intended to advocate that you break any laws that may apply to long gun transport where you live. It’s your job to know what laws, if any, apply.

This product is available via direct order from Lucid Optics. The price is $13.95.

The Snap Rack makes it possible for me to carry a long gun in the vehicle with relative concealment and quick access. Compared to some other methods, it’s also out of the way when not in use. This system lends great peace of mind in a world where security threats are ever-evolving.

Have you seen our Vehicle Firearm Tactics Course yet? Many gun defensive situations happen in and around a car, so check it out.