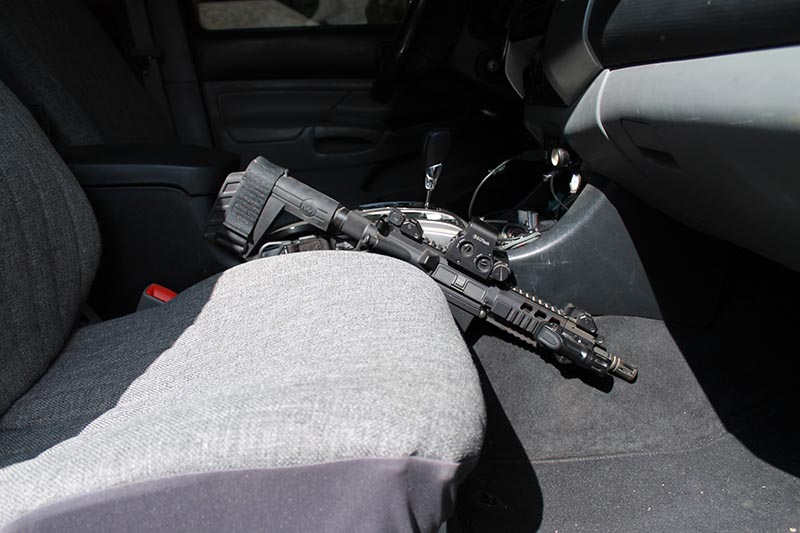 carbine carry between the seats

Most reading this article are concealed carriers of a handgun on the body for defensive purposes. But what about gun carry in your vehicle? Sure you say, I carry my handgun all the time in the car. Have you considered carry of a carbine–one that’s ready and accessible–in your vehicle?

Okay, so not all state laws are conducive to carry of a gun inside your vehicle with even a handgun, much less a carbine, especially if the firearm is loaded and readily available. It is your responsibility to know the laws of your state and others where you may travel and of course your decision on how you will proceed in those states.

For our discussion here I consider a carbine a 16-inch barrel length firearm with a fixed or collapsible stock that fires rifle or pistol cartridges and is intended to be fired with the stock in contact with the shoulder. I would not eliminate “pistol brace” stocks that are attached to a much shorter-barreled gun just because the firearm is classified as a pistol.  These systems are legal to be fired with the pistol brace pulled into the shoulder and they give excellent maneuverability in tight spaces such as your vehicle.

I am fortunate to live in a state that allows a loaded gun to be carried inside the vehicle. After all, what good is an unloaded gun for self-defense? I’ve carried a carbine in my truck all my life and continue to do so today. Aside from admiring short rifles, why would I want to carry one in the first place? Basically, whatever I can do with a pistol I can do better with a carbine with the obvious exception of concealment.

You may be wondering how I carry a carbine day to day inside my truck, accessible on a moment’s notice. Below are some ways I have carried a carbine over the years; I’m sure there are other methods, limited only by your imagination.

Most vehicles today have a split type front seat with a console between them. Most often, I carry a carbine wedged between the split seats or between the seat and console itself. In other words, the carbine is immediately to my right while driving and instantly accessible if needed. This is my number one choice for carrying in the vehicle and will work with most short-barreled rifles.

Admittedly, a flat-sided gun like the lever action carbine trapper model 30-30, for example, is best suited for this method. I keep the magazine loaded with the chamber empty. A carbine with an extended magazine works well also; the magazine is what holds the gun in place between the seats. The gun stays hidden from view by some article of clothing such as a jacket. 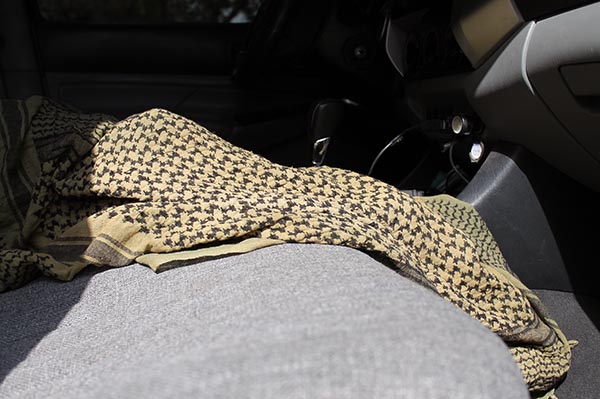 Any item can be used for temporary concealment.

Below or behind the driver’s seat

I have also carried by this method, but it is much less preferable in my opinion. In this case you must have a seat cover or some type of carrying device that will allow the carbine to lay crossways, either under your legs or on the back of the driver’s seat. There are commercially made devices that will work for this technique, or you can devise something yourself.

The problem is that there is nothing quick about getting the gun out in an efficient manner and will most likely require you to stop and open the car door to access the carbine. Placing a carrier behind the front passenger seat where you as the driver can access the carbine by reaching across and behind the passenger seat may be a viable compromise. A simple device to keep the rifle in place and within reach behind the seat is the Snap Rack by Lucid Optics. It should be noted the elastic on the rack is black in color; yellow is used in the catalog for visibility.

I have carried a carbine and a shotgun with this method. Most common are commercially made racks that are designed to hold the gun securely in place by a mechanical device. Some, as used law enforcement vehicles, lock the gun in place and require pushing an electronic release switch to access the carbine. If you are in an area where security of the gun is always a risk, then this method may be for you. 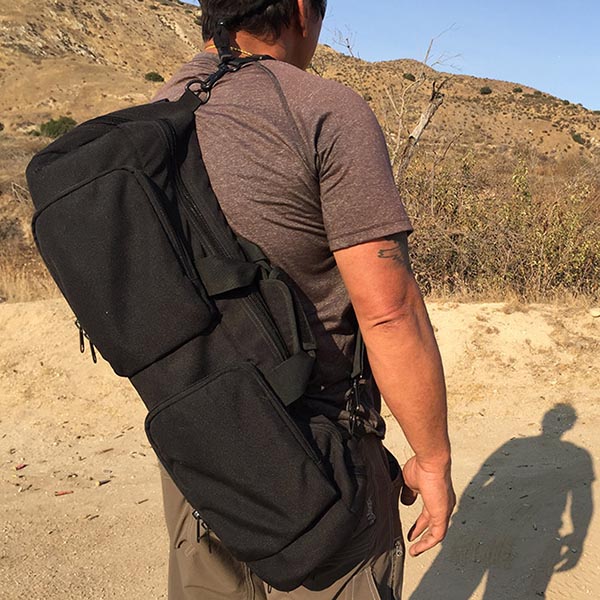 You may also want to consider how to move your selected carbine to and from your vehicle in a less than obvious manner. I often use the Defcon Compact Assault Bag or CAB for transporting a carbine that is easily taken down such as the AR platform or one that’s very short in overall length, such as a pistol brace system. Something as simple and discrete as a duffel bag or backpack may also be used. 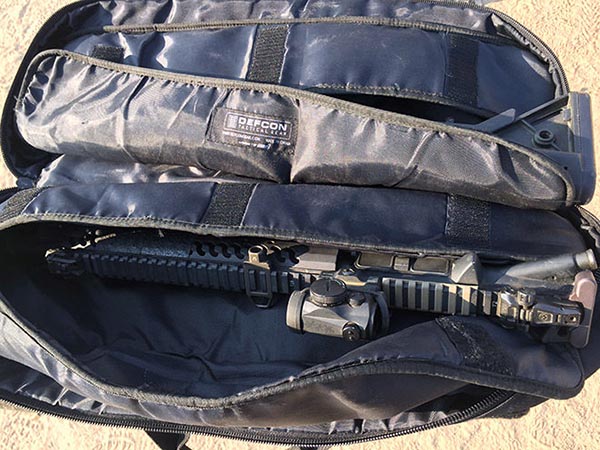 I’m sure there are other methods of vehicle carry for your carbine, but what I described here has worked for me over the years. Remember that security of the firearm moving it to and from the truck and while in the vehicle is your responsibility. Pistol in the car, great! Carbine in the car, even better!

Let us know what works for you in the comments below. Then, after you're done with that, you may want to consider our Vehicle Firearms Tactics course so you can fully understand how to defend yourself in and around your vehicle.

TERRY is a 30-year veteran of law enforcement with police and sheriff agencies, including SWAT and sniper roles, and has served as a state game warden. In addition, Nelson served seven years with New Mexico State Guard. A lifelong hunter, guide, tracker and firearms enthusiast, Terry is sought for training in multiple disciplines by both civilian and police-serving agencies and companies. He is still active in training New Mexico law enforcement officers in firearms, tactics, and use of force and holds a Master Firearms Instructor certification from New Mexico Department of Public Safety. In recent years Terry has gained ongoing training and background in field expedient emergency casualty care via the law enforcement and military communities. Nelson also holds a Basic Tac Med instructor certification from Federal Law Enforcement Training Center. He is active in training military personnel wishing to acclimate into civilian law enforcement roles. Currently, Nelson provides training for law enforcement and civilians through his own company, Firearms Training Institute.
View all posts by Terry Nelson →