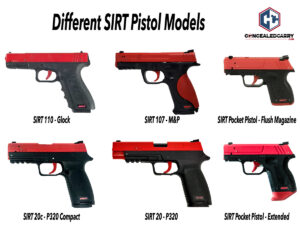 The SIRT is an invaluable tool for the shooter who wants to improve their skills. There are models that match some of the most popular handguns.

If you own a SIRT training pistol from Next Level Training, you likely have already seen why so many respected firearms instructors use and recommend this piece of gear. If you've heard of the SIRT but haven't ‘pulled the trigger' and purchased one, we have a lot of content highlighting just how you can use the item to become a safer, more proficient shooter.

And with ammo priced the way it is right now, it's a no-brainer.

If you have been living off the grid for years and never heard of the SIRT, it is a laser training pistol that allows you to build various gun handling skills, safely. Next Level Training produces several different models of SIRT pistol which match the specs of the major gun manufacturers' popular handgun models. These include Glock, Sig Sauer as well as M&P.

When the “shot breaks” the SIRT emits a laser that indicates where the muzzle was pointing. Because the laser turns off when the trigger is released, the SIRT can be used on any of the laser shot recording software on the market. There is a feature of the SIRT that often goes overlooked, and that is the trigger take-up laser. It has great benefit in several ways.

The laser is toggled on and off with a switch so you can use it when you want and turn it off when you don't need it.

What Do I Do With The Trigger Take-Up Laser? 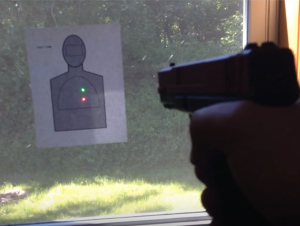 The SIRT's red trigger take-up laser is visible directly below the main laser. You can select a model with a green or red main laser.

I often like to use the take-up laser when teaching someone how to draw from their holster. “Keeping your finger outside of the trigger guard and resting on the frame until you're on target and prepared to fire” becomes more than just a firearm safety rule.

More than just indicating that you're muzzling yourself during a draw, the take-up laser can be used to indicate poor trigger discipline during training. It will be clear when someone is pointing their firearm at a team member or innocent person because of poor trigger finger and muzzle discipline.

Catching these issues early on can keep dangerously bad habits from developing.

The trigger take-up laser can also be used to indicate sloppy trigger work. As long as people understand how their sights work, they can properly align them on the target without a problem. Poor mechanics while squeezing the trigger will introduce unnecessary movement that moves the sights, resulting in misses.

In closing, the take-up laser may not be a feature of the SIRT that you use in every training session. However, it is a feature that has great importance and separates the SIRT from similar products that only have a single laser. Not only do we carry every model of SIRT available, but you will get the best price on a SIRT pistol.

How to retain your skills without ammo.