Join Our Newsletter
Shop Our Store
MAIN MENUMAIN MENU
By Matthew Maruster on September 8, 2022 in Gear

It seems everyone I talk to has a story about being the victim of a vehicle burglary. The ones who haven't experienced someone stealing property from their vehicle have a close family member who has. I understand this is anecdotal data, but regardless of the actual statistics, I can't help but see this as a major problem considering the overwhelming majority of criminals use stolen guns in their crimes. 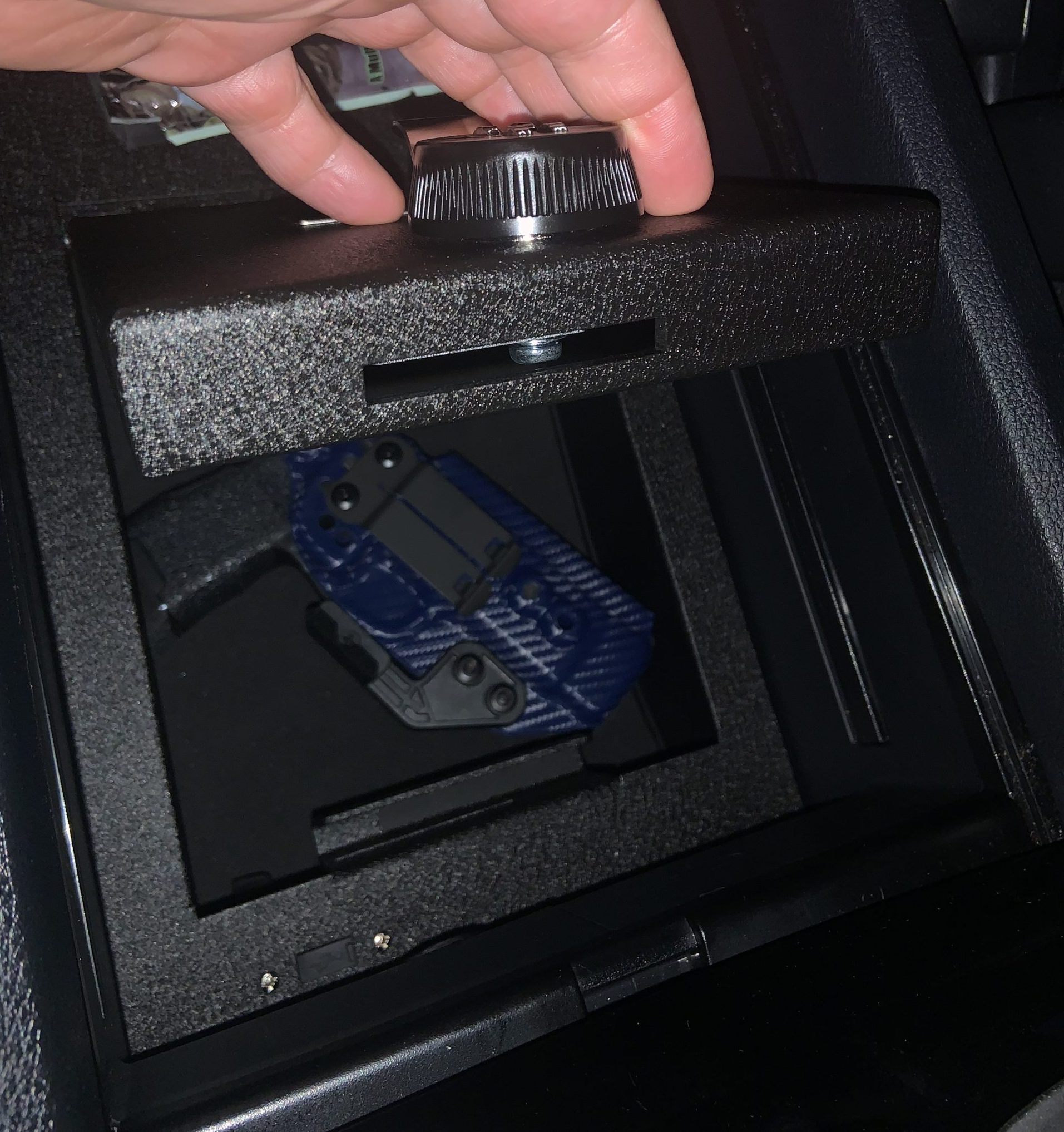 Secure Vehicle Storage is a Must —

I know personally 3 people who have had guns stolen from their vehicles over the last 2 years. In each incident, the men were visiting a gun free zone, so they had to leave their gun inside the vehicle. All 3 of them said they locked the gun inside a small handgun safe which was tethered to the vehicle and tucked out of sight under the seat.

I asked all of them if they had and stickers on their cars that would give the impression that they were a gun owner. Two had no stickers, one had a small “thin blue line” American Flag sticker on his back window. 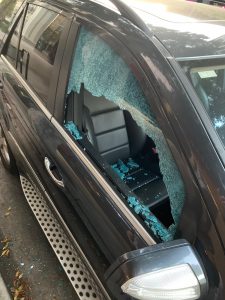 All of this caused me to reassess the standard advice I give to concealed carriers who occasionally need to leave their firearm inside their vehicle. The tethered handgun safe is certainly more secure than locking it in the glove box or leaving it in the center console. Criminals in a busy parking lot during the day may not have the time to stay and rummage through the vehicle. They also may not be carrying bolt cutters or something to cut a steel cable. So, this is a decent option, and one I've recommended.

But clearly, it isn't the best option.

Perhaps there are so many vehicle burglaries because it's the easiest way for criminals to fund their lifestyle. They know most vehicle burglaries don't go reported to police, and the ones that are reported won't be investigated. Unless police catch them in the act, they are walking away from your vehicle with your property. And there is almost zero chance they will sit in a jail cell because of a vehicle burglary charge. All of this emboldens criminals to commit vehicle burglaries. If someone steals your gun, you're probably only going to get it back if it's found in the possession of a criminal or at the scene of a crime.

Searching for the Best Option —

Another option is to bolt a safe that slides on rails under the driver's seat. These are a good option, but I've only seen them for Jeeps.

So over the last few months, I started looking for good in vehicle gun storage options that I could recommend to friends, readers and students.

In my searching, I came across a company called Console Vault that was selling in-vehicle safes designed to fit seamlessly into the vehicle's center console. I dug a bit deeper and realized the company's headquarters was in Ohio, about 25 minutes from my house. I contacted Ashlee Dickson at Console Vault and she invited me to come talk to the team and look at their design center. 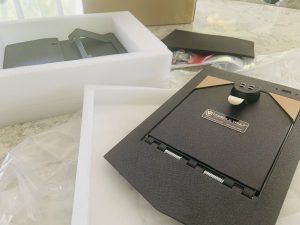 I went out to the facility and met Ashlee, Scott Bonvissuto and Denis Bruncak, who took me around the design center and told me about not only Console Vault, but the parent company, D-Terra Solutions. Dennis, the president of D-Terra, a manufacturing and logistics company, explained that in 2016 they became the major shareholder of Scott's company, Console Vault. Since then, Ford and Toyota have contracted with Console Vault for factory safe options in their vehicles, and the company has earned several awards and certifications for quality and design. 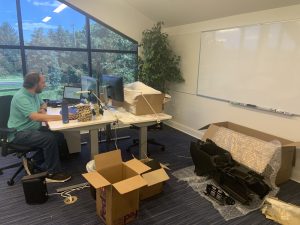 During my tour of the design center, I saw how engineers use the CAD files to design safes for new models. When the company doesn't have the files for the center console of a particular vehicle, they take the dimensions directly from a console they purchase from the auto manufacturer.

The safe primarily consists of two major parts, a top and a bottom piece. The locking mechanism came pre-installed on the top hatch, and because my vehicle had a USB port inside the center console, my model also included a USB adapter.

The safe's 12-gauge steel is precisely designed to fit the vehicle's existing bolt patterns, USB ports and clearance for built-in trays and console lids. Because of the design, you don't really lose any space inside your center console.

There are a few different styles of locking mechanisms for the safes. Mine came with the ‘keyless, 4-digit lock.' Instructions on how to set a personalized combination are inside the box, and the process takes only seconds. Once you enter the combination, you turn the dial to unlock the safe. The lid is spring assisted, so it opens on its own and stays that way until it's pushed back down. The dial is a good size, but some with diminished eyesight may find the numbers on the dial a little difficult to read. The numbers and knob on the Elite 4-digit lock are larger, so if you think you struggle to see small details, that might be the rout to go.

From what I'm told, there is a digital lock mechanism in the works. This would all but eliminate any issues reading the numbers, but the release date on this lock is not set.

I'm told for the most part, all the locks, including the digital lock currently in the works, will work with existing safes. That means you won't have to get a new safe if you upgrade or change lock mechanisms in the future.

The entire installation took roughly 25-30 minutes and required tools that everyone likely already owns. I used a 1/4″ socket wrench with a few different sized sockets, a screwdriver, and a paperclip to set the code on the dial. No drilling or modification was necessary. You can see the entire install process in the video I've included above.

Here is how the install went in my 2019 Honda Ridgeline. 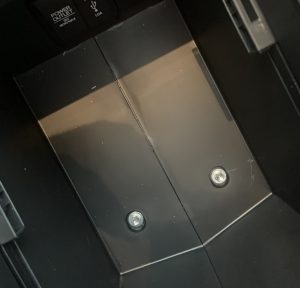 The safe uses the same factory bolts that secure the center console to the vehicle.

As mentioned, I have a USB port inside the center console. The included adapter plugs into the existing port, and then gets screwed to the underside of the safe. Once installed, the USB port protrudes out from the top of the safe, capped with a rubber plug. Even with the safe closed, I can still access the USB port.

The USB adapter gives me access even with the safe installed and closed.

I placed the factory mat back inside the safe, and on top, a thin foam mat which came with the safe. Finally, I programed the lock with a unique combination and installed the sliding tray that is part of my vehicle's center console.

My Experience Using the Safe —

If your vehicle's center console is really small, or Console Vault doesn't make one for it, you may soon have an option. I'm told the company is working on a small, universal safe that secures inside the vehicle, but is also removable so you can take with you. I'm not sure when that will be available or the specifics, but the team told me it's currently in the works. 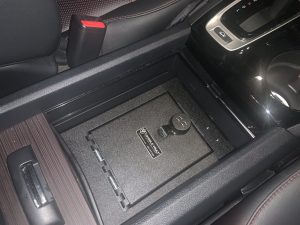 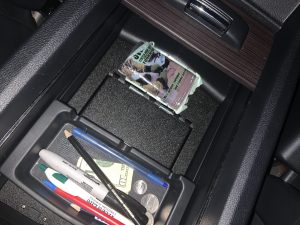 It might please Harley Davidson owners to know that Console Vault has a safe that fits a saddle bag. With the safe installed, the saddlebag and safe are actually secure to the motorcycle's frame. I don't ride a motorcycle anymore, but I definitely see a practical application for a saddlebag safe.

The install was quicker and easier than I expected. And because no permanent modifications are necessary, you can install this safe even if you're leasing or renting a vehicle.

A handgun safe with steel cable runs around $100-$150 and the safe from Console Vault will cost about $300, which is a bit more money. However, I think if you have the option, bolting the safe directly to the vehicle gives added security that is well worth the money.

So overall, the safe from Console Vault exceeded my expectations. The safe fits perfectly in my 2019 Ridgeline and gives me a perfect spot to secure my firearm when I need to go into a “gun-free” zone. I usually leave the safe unlocked, only locking it when I need to.

And the safe isn't just for gun owners. Depending on the size of your safe, you can store a purse or electronics that you might not want to carry with you. If you need to leave your vehicle with a valet service or transport large amounts of cash, or important documents for business, this is a must-have.

What do you do with your gun when you have to go into a non-permissive environment? Let us know in the comments below.