This past weekend marked the kickoff of the first annual NRA Carry Guard Expo in Milwaukee, Wisconsin. Several hundred vendors and thousands of visitors from across the U.S. attended the 3-day event that ran August 25-27, 2017. ConcealedCarry.com was onsite throughout the weekend providing coverage of the show.

We wanted to put together a list of the top products we found at the Expo, so here they are in no particular order: the 8 Top Products from the 2017 NRA Carry Guard Expo:

This thing is REALLY interesting! The gun–based on the Boberg design which was bought out by Bond Arms–is excruciatingly small especially considering it has a full 3.35″ long barrel in it. Of course the secret to the name comes from the ejection port/chamber being located BEHIND the trigger of the gun. This results in a very short pistol that shoots more like a larger one. In fact the front of the trigger guard is almost even with the muzzle.

SHOOTERS BEWARE–those of you that like to control your handgun with your support hand index finger placed on the front of the trigger guard, I probably would not recommend that grip with the BullPup9. In fact, I would watch your fingers and thumbs generally with how they are placed (thumbs forward gripsters!) as it would be easy for someone with long fingers to get them in front of the muzzle of this gun, even more so than with other micro-compact guns

Obviously the location of the chamber presents a unique challenge with the feeding of the cartridges. Instead of a magazine pushing up the rounds just behind (or in front depending on how you look at it) the open chamber for the slide to catch and push into the chamber, the BullPup9 has a special extractor that extracts the cartridge (rearward) out of the magazine on recoil, and then the round is pushed into the chamber. To make this possible, the cartridges are loaded “backwards” into the magazines. They are loaded in bullet first rather than rim first.

The trigger is a very light and smooth double-action-only (DAO). In fact, I don't know that I've ever pressed a more smooth DAO trigger on a small semi-automatic. Another neat feature to the pistol that company CEO Gordon Bond showed us was the ease of racking the slide. This is due to the lack of a recoil spring. Kind of mind-blowing and perhaps even confusing as to how this all works? Check out the pictures below and stay tuned for a more in depth review in the near future. 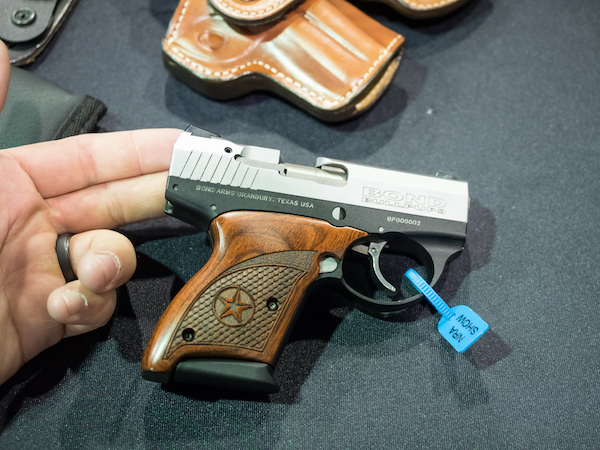 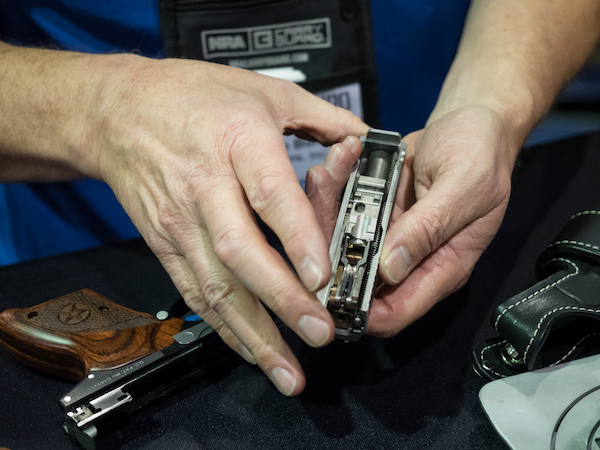 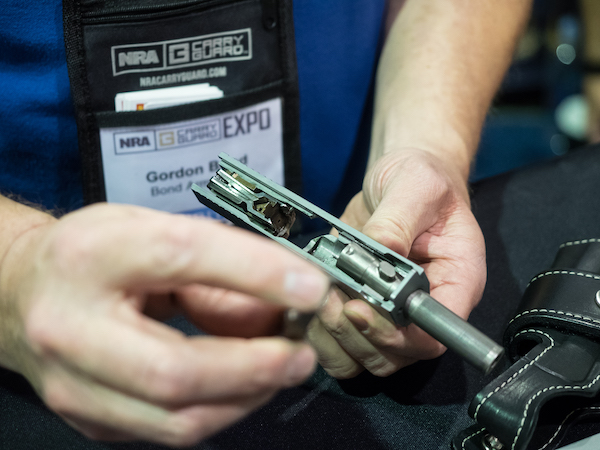 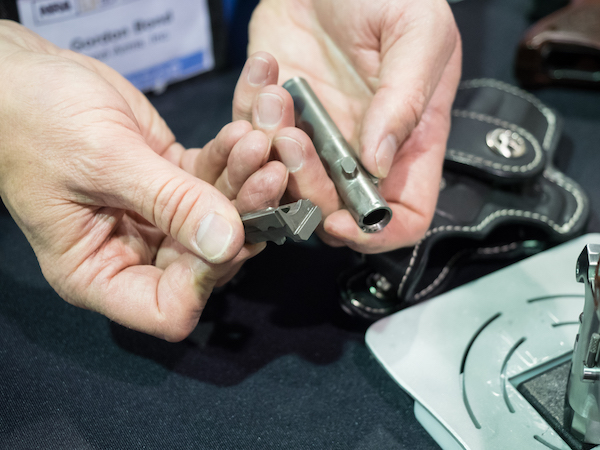 We've seen a lot of innovation over the last few years (including at this show) that caters to the semi-automatic handgun market. In fact, looking at industry trends in recent history, you'd think the revolver market is all but extinct. Every new product, holster, accessory, aftermarket upgrade, etc. seems to be solely focused on semi-autos.

This is why I was super excited to see the new CLICK LOADER. This is truly one of the most innovative revolver products that has hit the market in many years.

This is a speed loader for revolvers that requires no twisting or special tricks. You load the CLICK LOADER, lock the loaded rounds into place with a simple press of a small button on the top. Once locked, the rounds will not fall out, and the speed loader can be carried in a variety of ways and even handled quite roughly without worry.

Reloading is simple, upon opening the cylinder simply drop the CLICK LOADER with rounds aligned into the cylinder, a slight amount of pressure will release the cartridges into their respective chambers, and the speed loader will fall right off with a slight tilt. It is the extractor that pushes on the release on the underneath side of the loader that causes the rounds to fall free.

I am told this speed loader allows for one-handed reloads with a revolver by inserting the loader into the cylinder and then giving a firm tap on the ground or another solid surface … something that has been extremely difficult up to this time with traditional reloaders. For more details, check out the images below: 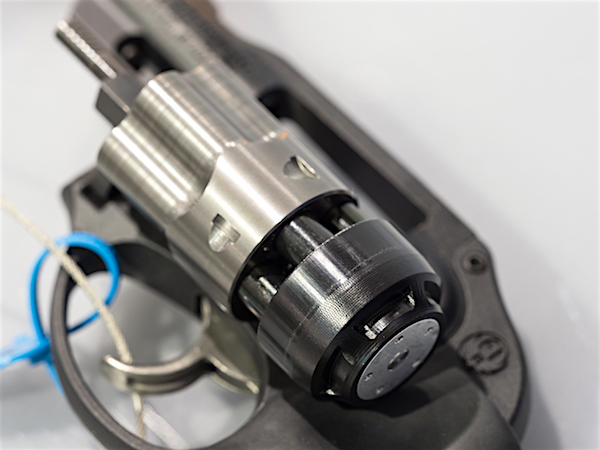 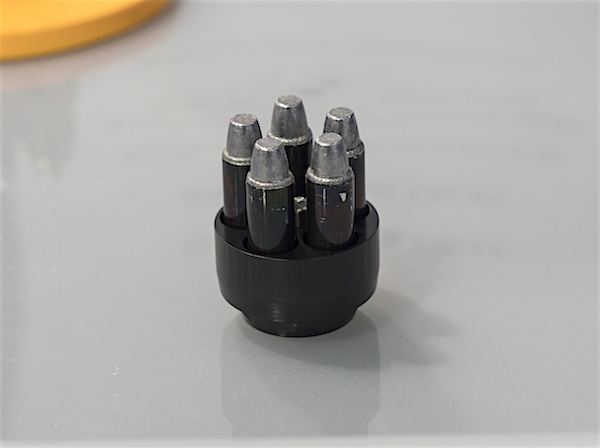 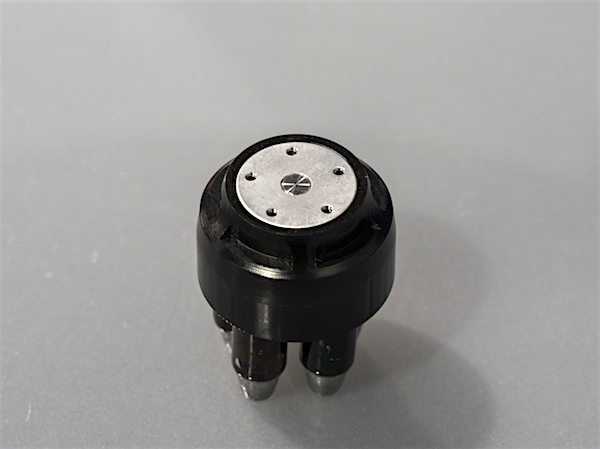 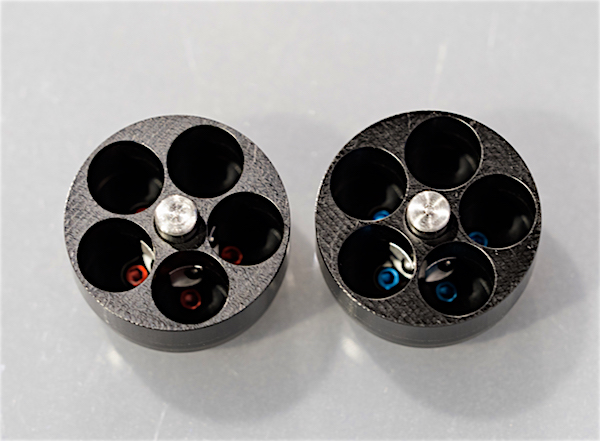 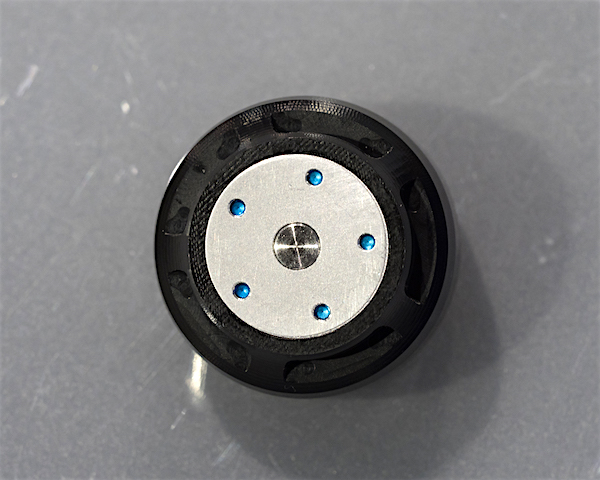 A video made the viral rounds recently showing how the M3 Glock 19 unfolds from a small, Galaxy S8+ or iPhone 7+ sized small profile into a fully functioning 23-round-bearing Glock pistol. We saw the M1 Sig P320 model at SHOT Show earlier this year, but it's been revamped and improved.

However, it's the M3 Glock that wins major points in the innovation and creativity department. We give them major props for coming up with something that nobody saw coming until a few months ago. The product is still in pre-production, and there are still a few kinks to work out, but they are taking pre-orders and the gun should be ready in a few months. 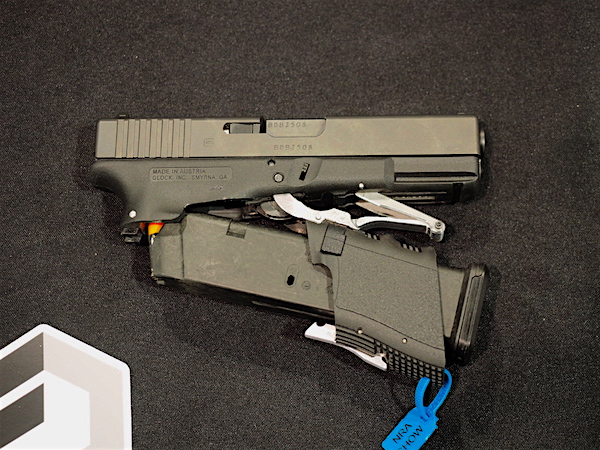 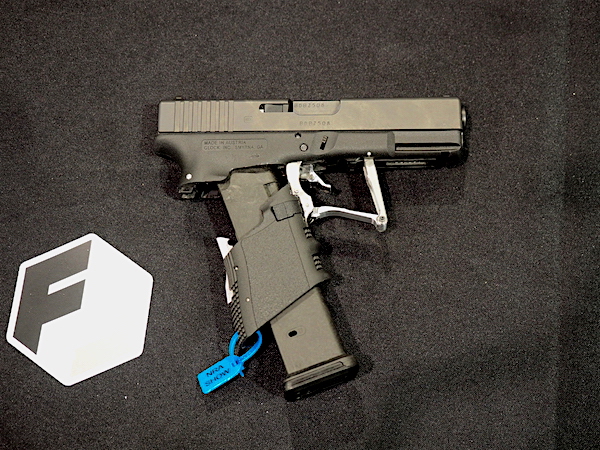 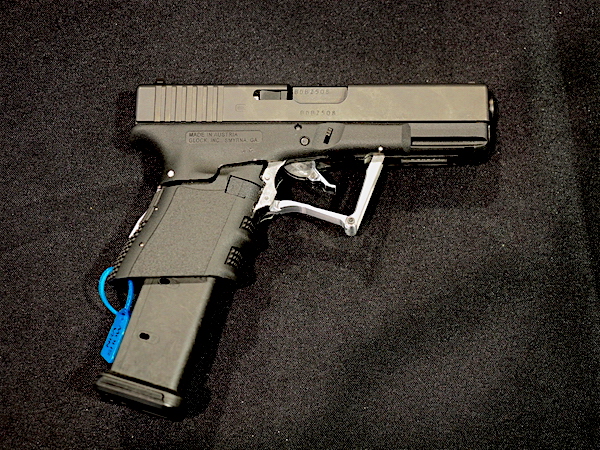 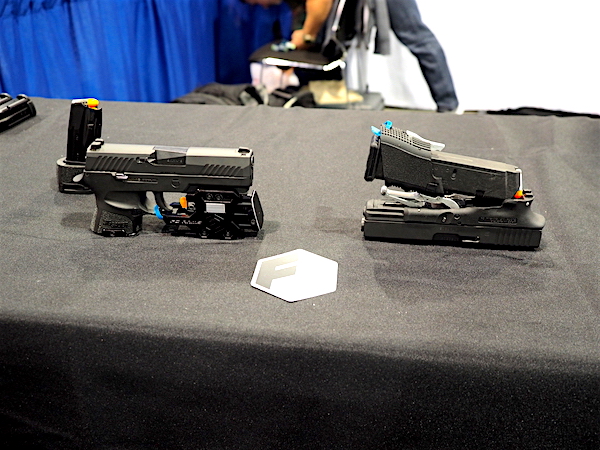 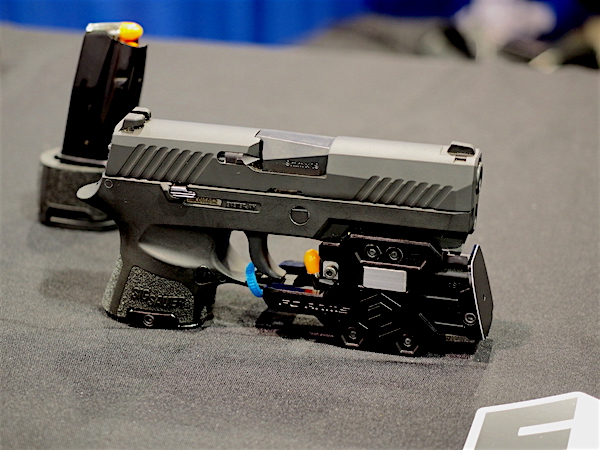 The Defender Flex Jeans were a hit at SHOT Show earlier this year, but they only had them in the Slim-Fit style. They're great pants, super comfortable, and they have loads of tactically-convenient pockets. The slim-fit thing is all the rage these days, but we just couldn't get fully on-board with them especially if you're a larger dude. They announced that a straight leg version would soon be on their way, but we had yet to see them.

Now we found the straight-leg (or boot-cut) pants in the 5.11 Tactical booth at the expo. What a godsend! We love them, and we think you should, too! We've done a review of the slim ones in the past, check it out. 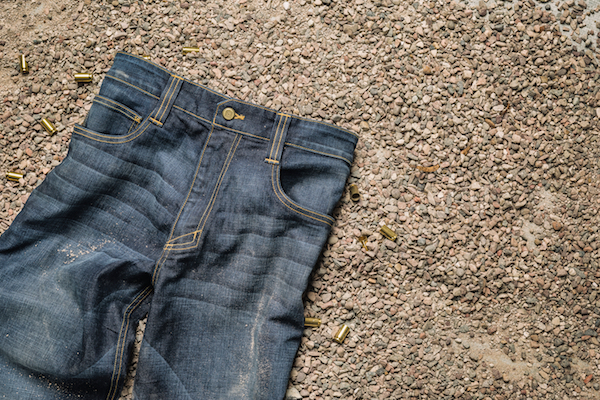 Apex Tactical has been hitting it out of the park in recent history with their fantastic aftermarket triggers and trigger kits. Now just about any striker-fired pistol can be made to shoot much better with a quick trigger fix from them.

What wowed us at this show was that Apex rolled out a new straight trigger for the Smith & Wesson M&P M2.0. The M2.0 already has a pretty decent trigger amongst striker-fired semi-automatics, but the new Apex trigger takes it to a whole new level especially with a short, fast reset.

But even more impressive was the fact that they have a new enhanced trigger kit for the barely-to-market FN509 pistol. It, too, was a nice upgrade over the stock trigger. 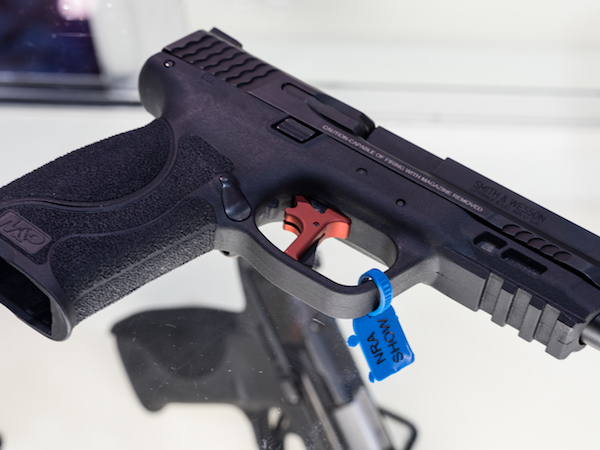 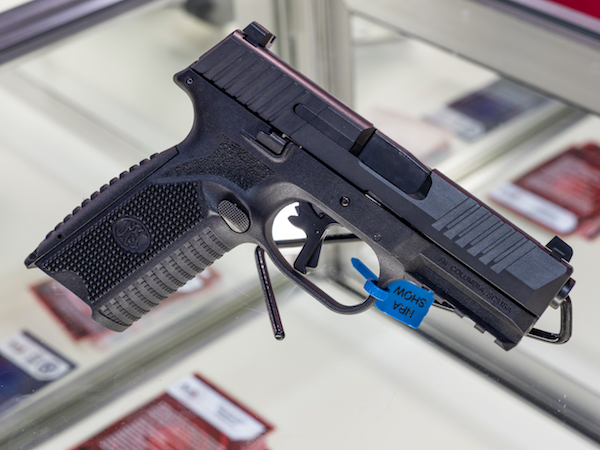 These guys have been around for a few years, but we had yet to see the product in person. We were impressed with what SnagMag has to offer everyday carriers. There are millions of concealed carriers in the U.S. and chances are only a fraction of them actually carry everyday. An even smaller percentage probably carry a spare mag or any spare ammunition at all. But the SnagMag makes it super easy to do by allowing you to covertly carry a spare mag in your front pants pocket that keeps the magazine oriented correctly. Grasping the mag and indexing it properly is simple, and a quick drawing motion is all it takes to have it in the hand on its way to the magwell of the gun. 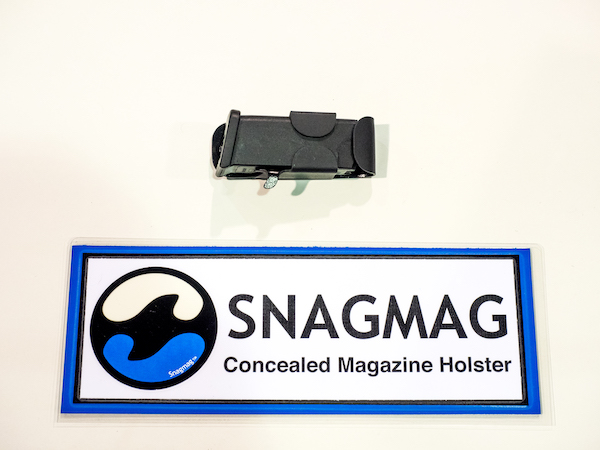 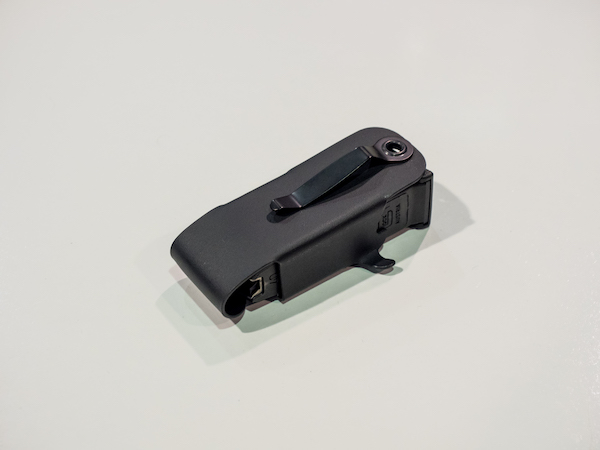 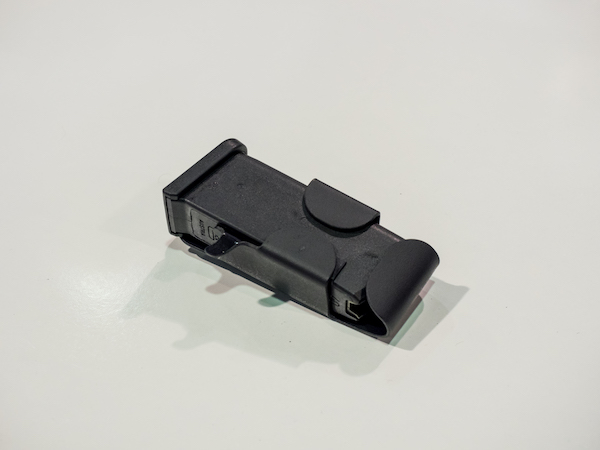 Yellow Jacket is a new company that got started with the vision of creating a self-defense product that people keep with them 100% of the time. They looked at cellphones as being the perfect opportunity because these days most people have their cellphones all the time.

So they created a cellphone case that not only acts as a portable power source for recharging, but it also is capable of deploying in an instant a 7+ million volt conducted electrical weapon (CEW) or stun gun. Yes, the case adds considerable bulk to the phone, but it's a lot less bulky than carrying a separate stun device or weapon. Unfortunately not available in all states or jurisdictions due to legal restrictions. Check your local laws. 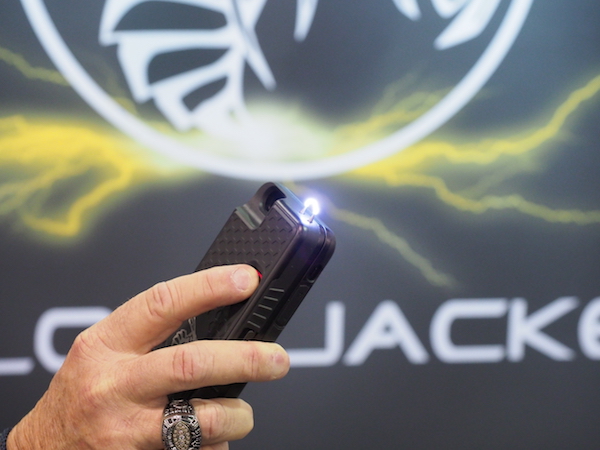 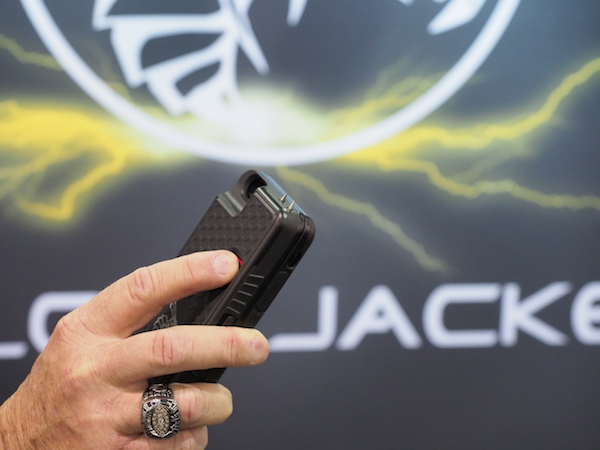 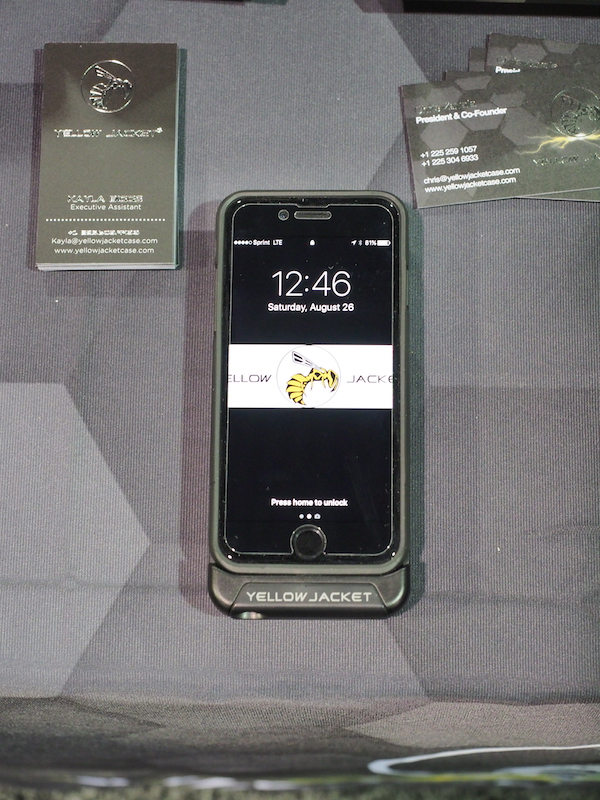 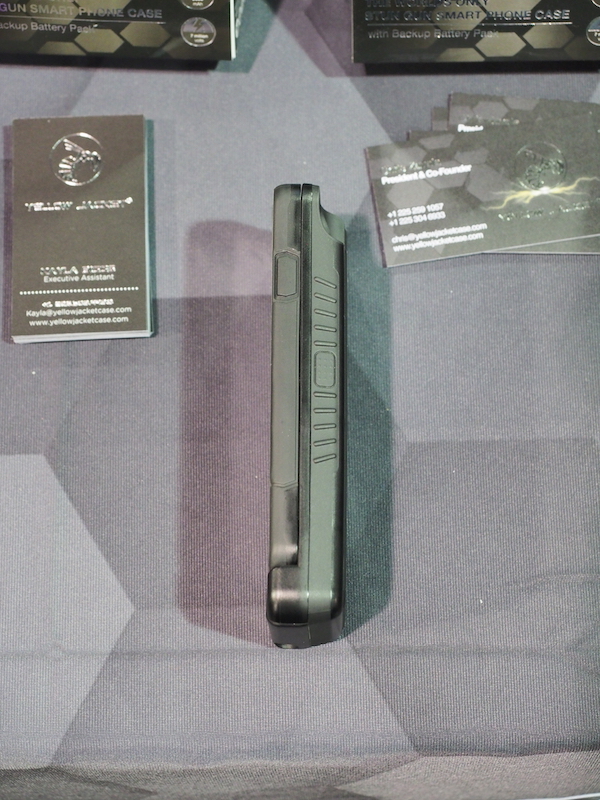 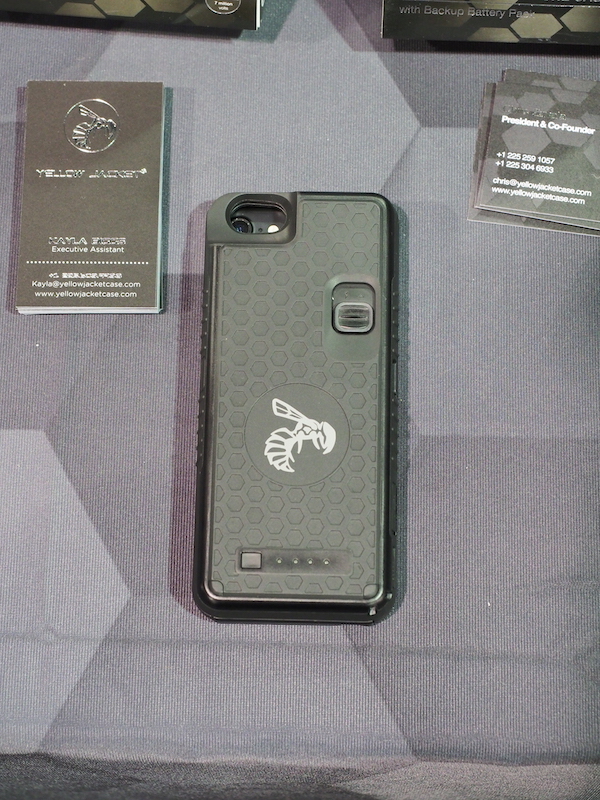 XS Sights is a company that is well known for their Big Dot and Express sights. We cannot spill the beans just yet, but they have a new set of sights coming very soon that are quite exciting for a certain segment of the shooting population. We had a nice chat with the boys there at XS Sights, and we're very excited for this new product line. Stay tuned for a forthcoming review!

That wraps it up for this year's NRA Carry Guard Expo. We will look forward to attending next year's show as well, which we expect will be even bigger and better! Did you get a chance to go? Let me know in the comments below.