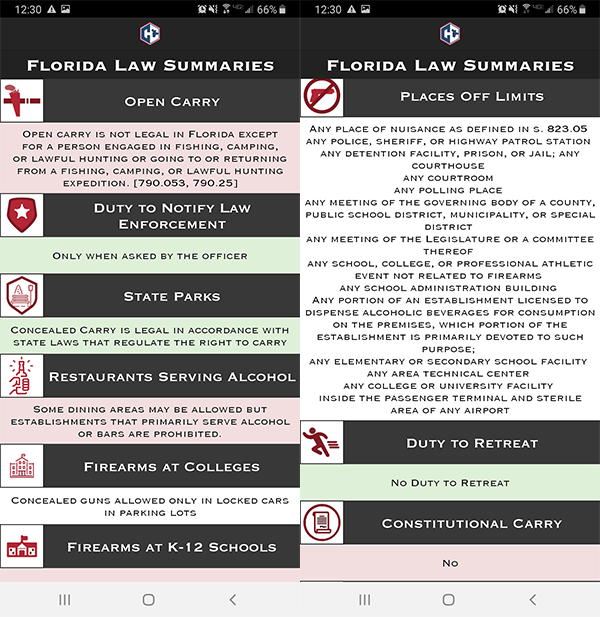 The app we have made free to gun owners everywhere is, I believe, the best in the industry. I'm not just saying that because they pay me. If I didn't like it, if I didn't think it was the best one out there, we wouldn't even be having this conversation right now.

I just got back from vacationing in Florida and I used it multiple times throughout the week. It's that useful.

I used it to check the reciprocity to make sure nothing changed from the last time I traveled to Florida. I also used it each time I stopped. For example, I had never been to Alabama before and we stopped for a while there.

I needed to make sure I wasn't breaking any local laws. I had the chance to learn in quick fashion what, if any, gun laws are put in place to restrict me.

I currently have concealed carry permits from NC and PA, though my PA license will be invalid after it expires because I moved out of that state last year. Still, my NC permit is reciprocated in more states than most others offer.

I think the reason why this is, is due to the fact that North Carolina screens for mental health but I'm not entirely sure–nor is that the topic of this article.

But, one of the reasons why I know it is so well received in other states, is because of the reciprocity map that's built into the app. Here is a screen shot of when I select NC Resident from the drop down menu:

I love seeing all that green.

It can take a little time to show the results of the reciprocity map because it's a massive amount of data that we update whenever changes are made between the states. And, changes are made all the time. Our app guy does his very best to update these changes in as close to real time as possible.

Another thing the app allows you to do is search for the laws in each state. For example: which places are deemed off limits to gun carriers, are there magazine capacity restrictions, can you eat in a bar with your gun, etc.

All you have to do is choose the state you're researching from the alphabetical list that looks like this:

And, voila. At your fingertips is a wealth of information designed to show you the gun laws in each state across the country.

All of this is free.

Again, our app guy does his very best to update these things in real time. And, once again, changes are happening all the time. The Concealed Carry App is the best one out there. Here are a couple of screen shots from the app showing what I saw in Florida:

As you can see, it is also color coded. We do this on purpose to help contrast any laws that you should pay more attention to. Red means there may be restrictions, green means less restrictions. White is neutral and is informational.

Some of the other cool benefits of downloading the app is that it lets you track your training so you can see how you're doing, listen to our podcast episodes directly from the app, input your permit expiration date so you're reminded before it runs out, shop our store, read our articles, and more.

This is starting to sound like a commercial, and that's not my intention. It's a great app, and you can find it here.

If you've got our application downloaded on your smart phone, what's your favorite thing about it? Let me know in the comments below.

4 Responses to Why You Really Should Download Our Free App