I'm sure I'm about to ruffle some feathers on this one, and that's okay. What I'm about to say is factually true, and that's all that matters. There are tons of myths floating around from folks, and I'd like to put one of them to rest today.

Here is a photo of my old Top-Break US Revolver Co., a very old and non-functioning gun.

the thing I like about revolvers is that they never malfunction

I know I have, and I probably have said it in the past. It sounds rational but isn't true.

Yeah, sure, there are other, more important issues in the world. So if you disagree and want to stop reading, it's your choice. However, I don't write this to stir up arguments like the never-ending, ‘what is the best caliber‘ war.

I write because many have put unwarranted trust into a revolver because they believe it can't fail. And no, I'm not saying revolvers are bad guns for everyday carry (EDC), but not because ‘they never malfunction.'

I hope you're getting the point. Every gun can malfunction, and it doesn't matter what platform or manufacturer from which it comes.

If you shoot a box of ammo every few months, you might never have a malfunction. However, shooting a high volume of rounds under many different conditions will eventually experience a malfunction.

Personally, I've never had a mechanical revolver malfunction. I own a few and shoot them somewhat regularly. However, the front sight fell off a 627 PC I was evaluating for a review one time. 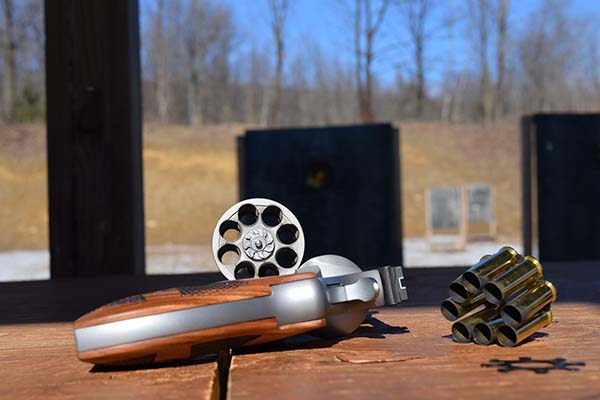 Revolvers are not as susceptible to some of the same issues semi-automatics have (feeding issues with hollow points, slide obstruction, magazine feeding issues, etc.,) but they indeed fail. And when they do break, it's usually catastrophic and cannot be easily or quickly fixed.

I'm not beating up on the revolver here; I do own a few of them and carry them on a semi-regular basis.

I want to do my part to fight against fake news.

Admittedly I haven't researched the topic past my personal experiences. However, I've asked some of my instructor friends if they see revolvers fail in their classes. Every one of them said they have. Thankfully, a guy who knows a lot about revolvers called Darryl Bolke wrote a Facebook post explaining his extensive experience with revolvers. In addition, Greg Ellifritz from Active Response Training put it into a blog post and then followed up with his thoughts on the topic.

In summary, revolvers fail. They especially fail when pressure testing the gear under ‘real-world' use. Nevertheless, I highly recommend reading the articles. You will find it well worth the time.

While not as scientific as Ellifritz and Bolke's study, I went for an ‘entertaining' look into the myth.

I'm in a private Facebook group for revolver ‘fanatics.' Below is an honest question someone posted to the group. 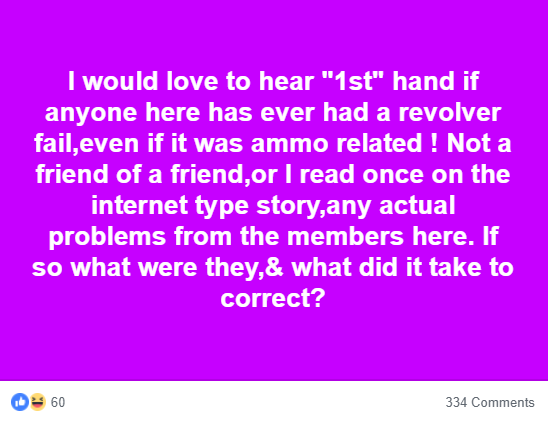 What followed was a typical social media frenzy response from well-meaning individuals, trolls who only insult, as well as responses from experienced and novice gun owners.

Please note that the following screenshots are from actual people in the group, though I have chosen to hide their identity because it took place in a private group.

And, if there were a couple of themes I feel like I noticed, it's that “hammerless” revolvers seem to have more problems, in general, than their hammered brethren.

It is a common myth and something I've unfortunately heard many times.

This next one was a DA/SA (double-action / single-action) gun–a S&W 686 in 357 Mag that seemed only to want to fire single action. At least the gun still worked.

But, I can't imagine having to defend myself with a gun that only worked each time I pulled back the hammer —

This next one is from a certified S&W armorer and lists multiple issues revolvers may have. While many gun failures, for both revolvers and semi-autos, are ammo or operator error, sometimes mechanical parts just break —

Then again, sometimes it's just a maintenance issue like we see in this following screenshot —

And of course, we have ammo failures as we see here —

The point of all this is simple and not to pick on revolvers. Revolvers do malfunction. To say otherwise, to say that a mechanical thing won't or cannot break is false.

The key with all firearms is to keep them well maintained and in tip-top shape, especially if you're carrying the gun for self-defense.

False information can be deadly.

You don't have to have malice to spread false information. So let's get the facts out there so people can choose the gun based on actual data.

Regardless of what kind of gun you like, safety applies universally to us all. I recommend gifting this free course to a new gun owner or possibly someone who needs a refresher on utilizing the pistol in a self-defense context and doing so safely.

Ohio Closer Than Ever to Constitutional Carry
S4E18: From Green Beret to Teacher of Citizens – Chris Cypert