TERRY is a 30-year veteran of law enforcement with police and sheriff agencies, including SWAT and sniper roles, and has served as a state game warden. In addition, Nelson served seven years with New Mexico State Guard. A lifelong hunter, guide, tracker and firearms enthusiast, Terry is sought for training in multiple disciplines by both civilian and police-serving agencies and companies. He is still active in training New Mexico law enforcement officers in firearms, tactics, and use of force and holds a Master Firearms Instructor certification from New Mexico Department of Public Safety. In recent years Terry has gained ongoing training and background in field expedient emergency casualty care via the law enforcement and military communities. Nelson also holds a Basic Tac Med instructor certification from Federal Law Enforcement Training Center. He is active in training military personnel wishing to acclimate into civilian law enforcement roles. Currently, Nelson provides training for law enforcement and civilians through his own company, Firearms Training Institute. 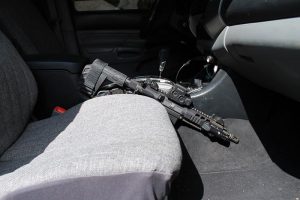 By Terry Nelson on September 10, 2018 in Firearms Ownership

Most reading this article are concealed carriers of a handgun on the body for defensive purposes. But what about gun carry in your vehicle? Sure you say, I carry my handgun all the time in the car. Have you considered carry of a carbine–one that’s ready and accessible–in your vehicle? Okay, so not all state […] 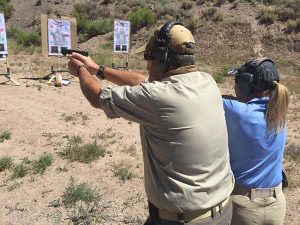 Most folks that take self-defense seriously and carry a pistol on a daily basis have trained and continue training on an individual level. But have you combined your live fire training with another person that you may spend a great deal of time with in your daily life, perhaps a spouse, coworker, or close friend? […]