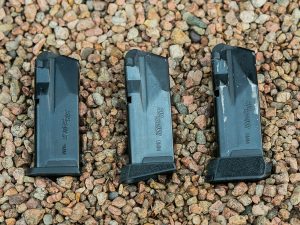 The week drags on after election and it's looking more and more like the people who want to confiscate guns will be put in office. I'm not going to name anyone in particular but I think we can all put our thinking caps on to figure out who I'm talking about.

I'm still hoping that the people who don't want to restrict gun rights can retain control of the Senate, which should make things more difficult for those who hate guns and the people who own them to get their way.

Still, I'm feeling a bit uneasy about these things and thought I'd share some of the things I think you should be buying in the interim, just in case.

These are things I am still buying as well.

I have the opinion that you can never have enough magazines for the guns you own. In fact, the more the merrier I always say. I just opened up several packages of magazines I had in a desk drawer for the past couple years and loaded them just in case. In case of what?

Take your pick. Either way, having extra mags can only be seen as a good thing.

This is especially true for your firearms like any AR-15s and AK-47s you might own. A really good place to buy standard capacity magazines, as well as low-capacity mags for those of you who live in less than free states, is GunMag Warehouse, but somewhere like PSA or Brownells has a good selection too, if you're buying other stuff.

Please note that I'll link to different places to buy stuff at the bottom of this article.

Going beyond rifle mags, however, are pistol magazines. One of the things that is always on the mouths of the gun grabbers is this: banning the sale of “high capacity magazines.” Always have extra mags for your guns, because magazine failure is one of the biggest problems for gun malfunctions.

I'm getting ready to buy some more pistol mags, just because.

Not just odd caliber guns, but things that make sense. What I mean, is that you can buy a revolver and a lever-action rifle in 327 Federal magnum, and can also shoot 32 H&R Mag.

If you haven't seen the ballistics information on 327 Fed Mag, it is very impressive, and it gets better with the long gun. 32 H&R is slightly less powerful, but still decent enough. And, being that you can still find both cartridges easier than you can, say, any of the more popular cartridges, this is a no-brainer.

Also consider other magnum cartridges like 41, 44, and any I may be missing.

Check your local gun store to see if you can purchase a few guns in odd calibers that are also likely to fly underneath any anti-gun radars.

Guns break. Sadly, more often than we'd probably like. This means that should you find yourself needing stuff, like recoil springs, trigger springs, etc., you might want to have that stuff on hand already.

You know, just in case.

In case of what? The braindead attempting mass confiscation.

Oh, and bolts and bolt carrier groups for your longer boom-sticks.

Brownells is usually a great place to buy stuff, as is Midway. (both linked to below)

You just never know how things are going to spin around, here. Having practice equipment like a SIRT pistol and other things you can practice with, will be the difference between you potentially running out of ammunition, and you conserving that ammo while still keeping your skills up to date.

Why does this matter? Well, if the gun grabbers start up some shenanigans and ammo becomes nearly impossible to find, you need to have some for whatever your purposes are at that point.

You never know what the future holds, and it's not looking good for us pro gun folks. With each passing election it seems to get worse. We don't know how this election will play out as of this writing, but I still think it's within reason to prepare for the worst.

Here are some places to buy some stuff, some of these are affiliate links, others are not: