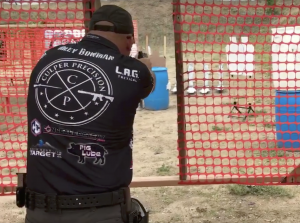 Here is Concealed Carry Podcast Host, Riley Bowman, shooting in his old jersey at a competition.

I have a confession to make, I'm not a competitive shooter. I've done a couple mock competitions, but that's really about it. But I have done a lot of research on the benefits of going into competitive shooting, and feel as though getting into the shooting sports helps take people to the next level in their defensive shooting skills.

But first, why haven't I started to compete in USPSA or IDPA or 3-gun? For me, the main reason is time, or, lack thereof. I just don't have the time needed to dedicate myself to actually shooting in competitions. I have a few things that are of extreme importance to me that I'm not willing to give up for anything.

My family and raising my kids right is one of those things.

The other thing is making sure there is plenty of food on the table. Therefore, when I'm not working I'm spending time with my family. Because I work a lot of erratic hours, I don't have time for much else.

Don't get me wrong, here, I'm not complaining. I love my life and wouldn't change anything.

If you have the time it is certainly well worth shooting a few competitions for the 3 reasons I'll discuss below:

First up, is that competitive shooting is actually more realistic shooting than you can ever do at a static range, shooting at a static target.

Sure, it's a game, but it's a game designed to get you thinking about shooting, and thinking in general. You may have never noticed, but when you go to the range and are shooting your pistol at a target in your lane, it doesn't require much thought.

And because it doesn't require much thought, it's actually less realistic than it should be and you're not practicing to your full potential.

At a competition, you have to think about which targets to engage and when, if there is a shoot/no-shoot target set up, when to shoot if you have a moving target, how to shoot at multiple targets, etc.

Here is Riley at a recent match, the USPSA Nationals:

There is no such thing as fluffing yourself up after shooting a competition. You know for a fact that you either sucked in that run or did great. I've spoken to many competitors who knew that they could have or should have done better, but just didn't.

If you can understand and come to the conclusion what you did wrong, that is real world feed back that you won't be getting at the regular range. Why? Because you're shooting different strings and can see where you messed up. And, because shooting in comps is more realistic because you're shooting from around barriers and whatnot, you can know without a doubt what it is you need to work on to get better.

Then you can work on these skills on your own outside of your competition, to measure your success for the next time. This translates directly into being able to defend yourself because you're already practicing being in those odd positions like shooting around a barrier, or prone, or whatever.

This tells you where you suck and need to improve, as well as where you are doing great.

What are different dynamics? Well, as stated in the previous point, it gives you different ways of shooting at targets that you may not have ever thought about before. I've seen some interesting layouts on these competitions that blew my mind, like shooting from an unstable position where balance was more important than ever before, shooting supine (on your back), etc.

In addition to that though, it adds a different dynamic which is of extreme importance that most people forget about when they go to the range and plink away at targets, and that is stress.

When you need to defend yourself with your gun, your body goes through an insane amount of changes in mere seconds. One second you're fine, and the next you're a mix of adrenaline, anger, fear, tunnel vision, fine motor skill loss, and the list goes on.

Because almost nobody experiences this beforehand, it can really mess the defender up when it happens. Competitive shooting adds the dynamic of stress by being timed and going up against other people. Both of those are important not just for the competition world, but also for defensive shooting, as well.

Knowing what this stress feels like is important, because it can help you work through it when and if that dreaded time ever comes where you need to defend yourself.

As a side note, using a shot timer is another way you can create some of this stress by yourself, and one of the reasons why I recommend using one. I like the RangeTech Shot Timer, by the way.

There are other things to keep in mind, however. Sometimes it can be less realistic than a real-world defensive scenario. For example, when you go to the range and shoot in a match, you're expected to dress a certain way. You are generally not going to be walking around in your daily clothes, whatever they may be.

In other words, you're set up to go shooting, and you won't be in a real critical incident. For example, common clothing for me in the summer is shorts and flip flops. I would not shoot a competition like this because I'd be trying to win, and I don't need to be losing my shoes on the way.

Another thing is that you'll have your hearing and eye protection on, which you wouldn't have on if you were attacked. This means that your ears will hear a real gunshot for the first time. As someone who has shot a gun without hearing protection on in the form of a 240 golf machine gun (because I was the 240 gunner for my platoon in the Marines), I can say that it doesn't feel good.

Granted, a 240 sounds a bit different than my SIG P365XL does, but it's the same concept. And, this is something that can throw you off.

At the end of the day, if you have the time to go compete in local matches it is a good idea. It helps to condition you to some of what you may experience in a real self-defense incident to help you be better prepared, even if it is a game. And, nobody says you have to go on to compete at the Nationals, just starting at a local chapter is good enough.

Phlster Pro Series Review: Is This The Best Holster You Can Buy? (VIDEO)
Man Defends Self From Paintball Attack, Thinking It Was A Real Gun