One of the greatest misconceptions surrounding defensive shooting is the “kill shot” or one shot kill that we see so often portrayed in movies and TV. Many gun owners and defensive shooters think “Oh well I carry a .357 Magnum or .45ACP, so I will only need a few shots to stop any threat.” Lets take a moment to understand what is going on with the body when bullets start to fly, and see if that holds up to some scrutiny.

To put it simply, good defensive shooting or “shooting to stop” is comprised of a few variables, namely, multiple rounds into the target with good targeting. Good targeting means you are targeting the center of mass and ocular occipital zones of the assailant. Tim Larkin of Target Focus Training describes it best when he says “the problem is not the bad guy’s gun or knife, the problem is that his brain is telling his finger to pull the trigger, or to lunge with the knife.”  So our job is simple, to disrupt or sever that connection effectively removing the assailant’s ability to continue to threaten our lives or the lives of those we love. This is why we target these zones.

Here is an example of center of mass; 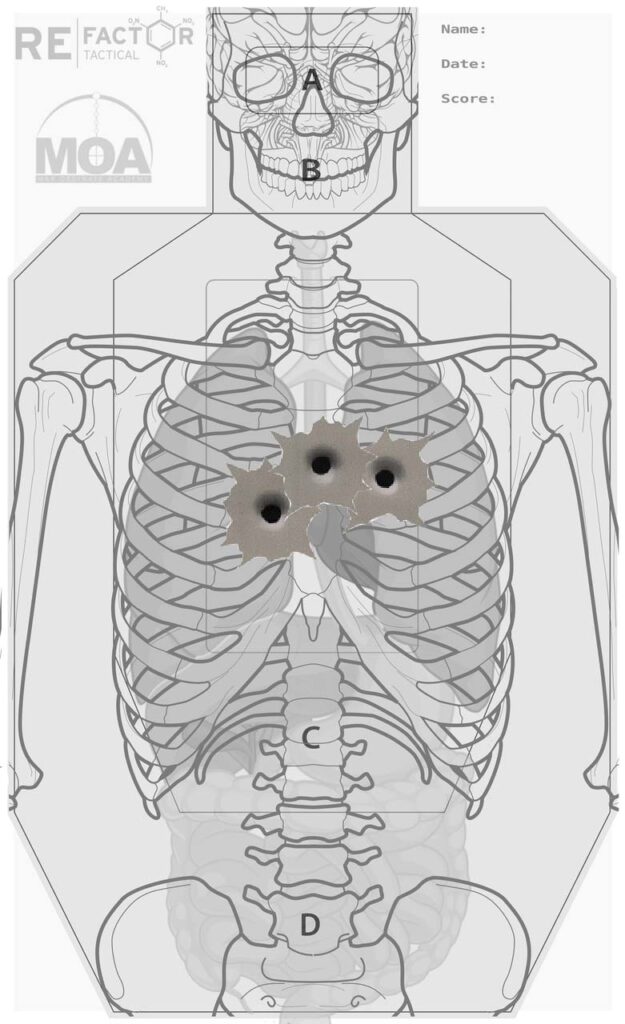 Think about what is going on physiologically when we target these vital organs. First of all, the job of the heart, lungs and liver is to deliver clean, oxygen rich blood to the brain. By destroying or perforating these organs we diminish or destroy their ability to do so, but how long can the brain still function without this vital blood supply? A generally accepted figure for an average person is 2-3 minutes.  So just disrupting/ damaging these vital organs often isn’t enough for shooters to win or even survive a gun fight. If the shooter uses only 7 or 8 rounds then takes cover you could be dealing with an assailant still trying to kill you for up to 3 more minutes. It’s important to note that in the case of some types of narcotics use, the body’s ability to shut itself down due to massive trauma is affected, meaning that even more rounds and better, more vital (albeit more difficult) targeting is necessary in order to stop the threat quickly.

That is is why we practice shooting not only center of mass but also ocular occipital. As pictured here; 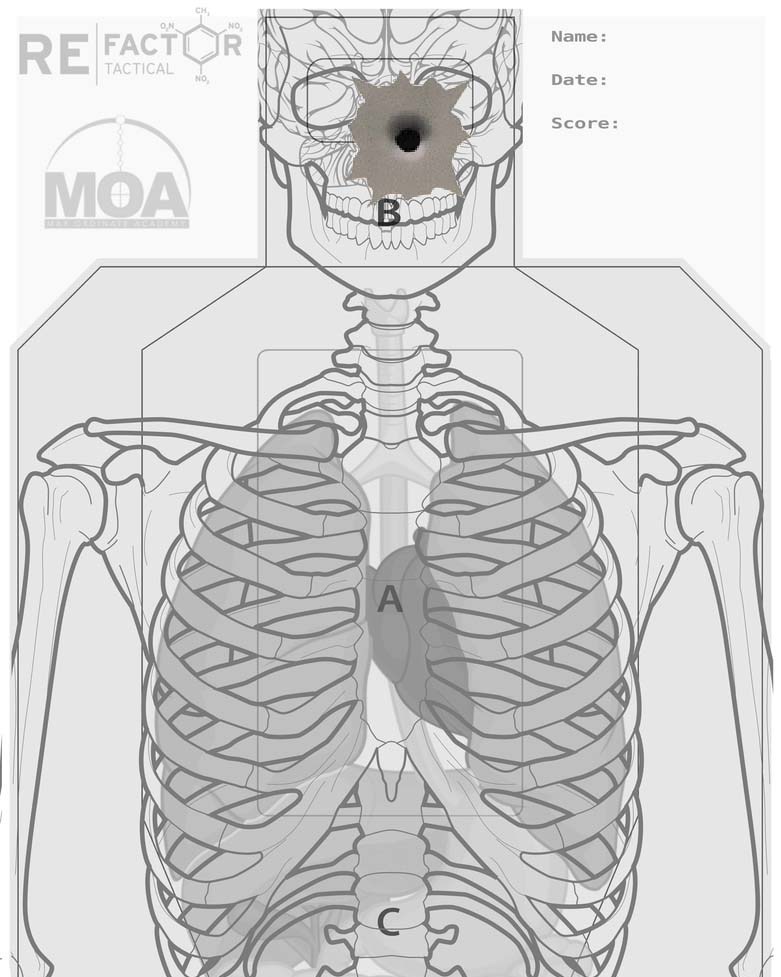 You might have noticed that the upper portion of the skull is missing from the target completely. The “Hollywood headshot” (by that I mean targeting the forehead area) is just that, hollywood stuff not real life. We look at this from a couple different angles.

1. The assailant is not using the upper right and left hemispheres of his brain to commit a crime.  It’s not the hemisphere responsible for logic and reasoning that he is using to commit the crime,  he is not using the artistic or musical hemisphere of his brain to commit the crime. Instead these types of behaviors originate from the base of the brain in the medulla oblongata,  “the animal brain” responsible for our most basic instincts/processes and is in charge of regulating body systems and muscle movement. Are you able to move your arm? The base of the brain is the center that sends the right signals to the muscles that make that happen the way you want. Also the base of the brain is more accessible lying behind porous sinus cavities and thinner bone.

2. The forehead contains one of the harder bones we have in our body, several years ago I remember reading a news story about a young man who took a 9mm to his forehead as part of a gang assassination. The shooter presses the trigger and sends a single 9mm round through the scalp, the bullet “ricochets” off the frontal bone of the boy or more accurately is redirected by the super hard bone that makes up his forehead.  The round travels under the scalp to the crown of his head where it tore a 3 ¼ inch hole in the top of his head. To the shooter it looks like the movies, ‘small hole in big hole out this kid is dead’ but he is not dead he wakes up in a hospital 9 hours later with what I can only assume is the worst headache of his life.

Now that you understand the importance of disrupting blood flow, the brain, and the nervous system we recommend these other articles:

View all posts by Brandon Scott →

21 Responses to The Physiology of Stopping The Threat