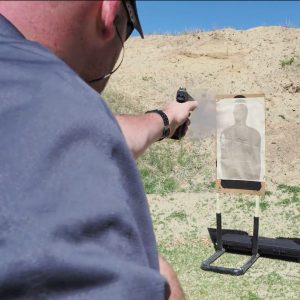 Shooting one-handed is a topic we've touched on before, but I like to put my own spin on things and add a couple other tidbits that I feel are important.

I'd like to say that if you're not shooting one-handed in addition to your regular shooting practice that you may want to start doing it because there are benefits.

The truth of the matter is that most people don't shoot one handed when at the range. Even less people shoot with their non-dominant hand assuming that the time may never come when they'd HAVE to do this, as in defense of life.

While admittedly not likely, there is a chance you'd need to defend yourself with either of your hands independently of each other because, as we all know, a critical incident is unpredictable chaos. And because you don't know how an event will turn out, stacking as many skills on your side as possible beforehand is the best bet to coming out victorious.

There are actually quite a few reasons as to why you may need to defend yourself with just one hand, whether it's your dominant or support hand.

For example, if you need to take care of a family member to keep them out of harm's way, or you may need to hold onto or carry a child as you're engaging an active threat.

Another reason may be that you're actively fighting a threat, physically. Let's say you were ambushed and were able to hold the person with one arm, but the fight was just starting. In a situation like this, you may need to draw your firearm and shoot one handed if the other person presents a knife or his own gun.

Finally, if your strong hand gets damaged in a fight you'd need to be able to defend yourself with your weak hand, if you're still being attacked.

Those are the reasons why you may need to do it in an active defensive scenario, but there are also benefits to training one-handed.

So what are the benefits? Let's tackle these really quick.

This is the obvious one, and it's that you gain a new skill. Any time you can gain a new skill that can be directly applied to save your life, or the life of a loved one, that's a good day.

That's why we always recommend people take Brian's FREE Emergency Trauma Response class. Having medical skills is only going to help you and being able to save life is more important than being able to take it.

But getting back on point, shooting one-handed isn't something that's natural or something that you will excel at right away. But it is something you need to learn how to do. Because again, you may need to use this newly acquired shooting skill to defend your own life one day.

This may be where I depart from others in the industry, and I'm going to make an attempt at trying to explain my position on this.

I actually think shooting one-handed is important to figure out some issues that I may be having with my shooting when my other hand isn't there to help me make up for any mistakes.

What do I mean? Well, for one having a strong, two-handed grip for regular shooting is the only way to go for two handed, thumbs forward shooting if you can get to that position in a defensive scenario.

I will never argue against that point, and if you ever need to defend yourself doing it with both hands on the gun is likely the best possible scenario because you're better like this. Your gun is more stable both upon the presentation and recoiling phase of shooting.

You can also shoot faster when you use both hands because of that stability. As we all know speed is important when seconds matter.

However, as already pointed out you may not be able to use both of your hands in your shooting as you've practiced. And, as others rightly point out — a strong, two-handed grip can make up for a lot of your other shooting problems, I believe, covering them up so you don't know they're there.

So many people (rightly) put so much emphasis on a strong, two-handed grip but (wrongly) never talk about what happens when both hands aren't present.

In other words, if you shoot one handed and are dropping shots, you can figure out why and then address it.

For example, trigger finger isolation issues will probably wreak havoc on your one-handed accuracy if you've never addressed that before (because you overcame it with your strong, two-handed grip).

If you're not practicing shooting with only one hand on the gun, you should probably start doing it. While the chances are excellent that you'll never need this skill, it's better to have that skill and not need it.

At the same time, shooting one handed can also help you figure out some of your deficiencies and hone in on fixing them. What are you waiting for? Get to the range!

3 Responses to The Benefits Of Shooting With One Hand