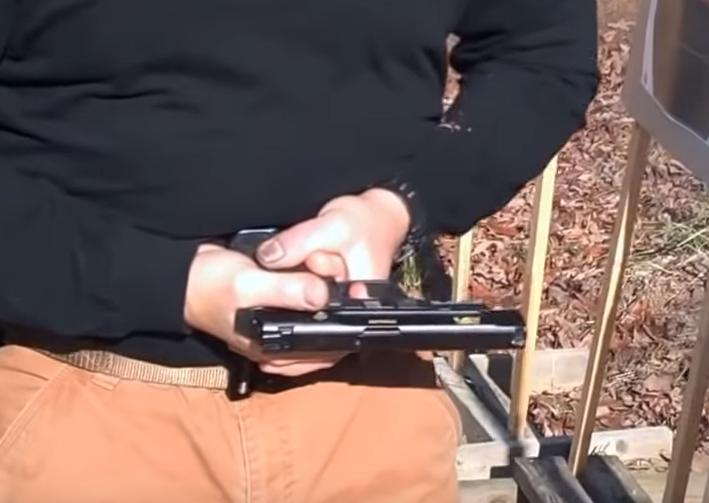 Your trigger manipulation is probably why you're missing the target, and here is how to fix it to better your accuracy —

Between Matthew, Riley, Jacob, and myself, I'm the only one who is not a pistol instructor of any kind. I'm therefore the least qualified (at least in my humble opinion) to be delivering any pistol shooting instruction.

That said, I do take classes from time to time and am capable of learning something new. I'm also pretty good at putting these thoughts into words like you're reading right now to help benefit others. Keep in mind though that I'm not an instructor.

On the plus side, I found a video that illustrates what I'm about to say from the guy who taught it to me, so that should help you as well.

The thoughts that I'm about to present to you now are actually things I picked up from a class I took from Chris Cerino. You can read my review on his class here. Just keep in mind that these are not my ideas and training, but his.

You can learn more about taking a class from Chris on his website, and I think it's totally worth the cost.

Until recently, the trigger was my Kryptonite. I had been shooting for years, but had some issues that I hadn't quite been able to figure out. My biggest issue was my trigger press. There is a lot of questionable information out there on how to pull your trigger properly.

I won't go into any of that right now, but what I will say is that what I'm about to show you will help your accuracy out a lot. I know this, because it helped me.

That said, there are some things to keep in mind. The first one, is that this will help you more if you're shooting a striker-fired pistol, not one that is double action. That does not mean that it won't help you if you shoot double action, because I've also improved my double action shooting employing a similar tactic.

It's just that it isn't as easy to perfect.

The second thing, is that you're going to have to practice this. If you've developed bad habits over the past 10+ years like I have, then you're really going to need to practice because you'll find yourself reverting back to your old stupidity like I still sometimes do.

When I pick up a gun I have to mentally tell myself a few different times to come up on the pressure wall. It's getting better, but I had years of bad practice behind me starting with, believe it or not, the Marine Corps pistol qualification.

The goal when you're shooting is to get on target and not allow your sights to move as you're pulling back the trigger. You want your sights on target as your trigger breaks.

Unfortunately, the way most shooters pull back the trigger is with such force that the sights do actually move.

There are a few different terms for this, such as “slapping the trigger” which is what you do when you just pull the trigger back to the rear in one quick motion. That tends to send your sights low and left, high and right, or wherever it is for you.

Whatever you call it, there is a fix.

Fixing this issue is so simple you may smack yourself upside the head like I wanted to do during the class where I learned it.

Take up the extra slack and come up on a the pressure wall. Cerino would say, “on target, on trigger” to us as we practiced shooting. Meaning, that when we were on target, we'd get on the trigger and take the slack away.

You may think that your gun will go off, but if you do it right it won't. You can practice this in your dry fire with an unloaded gun, or at the range with ammo. Obviously you want to keep your gun pointed in a safe direction.

While technically not a drill, that's what I'm going to call it.

At the range with a loaded gun, turn sideways on your target with your loaded gun in hand. Press the grip of your gun firmly into your belly with the muzzle at the paper target, get up on the pressure wall, and press the trigger.

After you've done this for a magazine or two, try to shoot twice, each time coming up on the pressure wall before firing the shot off. What you want to do is develop a nice shooting cadence otherwise known as a rhythm of fire.

Note that if you end up with any double taps, you're not ready to move on just yet.

If you do this right you'll actually shoot tight groups. After a while of shooting the gun with the grip planted firmly in your belly, assume your regular shooting platform and begin practicing coming up on your pressure wall again.

If any of that was the least bit confusing, the below video features the guy who taught me this technique showing it in better detail.

Here is the video of Chris showing someone how to manipulate the trigger correctly:

There are so many issues that we've seen when it comes to shooting and pulling the trigger the right way. Taking up all that slack beforehand minimizes the amount of sight movement and allows you to really stay on target better. I urge you to try the technique shown in the video.

It helped me and am pretty sure it'll help you, too.

Here's a small tip that has helped me pick up any gun and shoot it well on the first shot, something I wasn't always able to do before. I'd be able to shoot some guns well and others not so much. It was embarrassing for me, especially at places like SHOT Show.

I dry-fire each gun a few times beforehand to feel the trigger and get a feel for where the pressure wall is. After those few times, that gun turns into an old friend, and an extension of my body that I can shoot well.