Join Our Newsletter
Shop Our Store
MAIN MENUMAIN MENU
By Matthew Maruster on August 11, 2020 in Safety 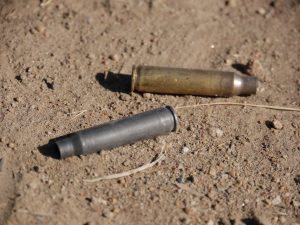 I admit I took zero hygiene safety precautions during my time in the Marine Corps.

I can't even estimate how many pounds of spent brass casings I carried in my cover (hat for you non-Marines) while policing brass on the range.

Not only that. After shooting and cleaning guns, I never washed my hands before eating food. And I never thought about it or was told otherwise.

Lead styphnate and other heavy metals are components found in ammunition. The cloud of smoke that envelops us when we shoot contains lead and other metals.

It gets on our hands, arms, and face. We breathe it in, and it stays on our clothing. It coats our handguns and covers the ground. While mostly invisible, it is far from harmless.

We know when we get certain levels of lead in our bodies, it isn't good. If you are older than 40 years old, the chances are good that you grew up playing with toys or lived in homes painted with lead paint. High levels of lead cause all kinds of health and developmental problems.

Heavy metal particles, including lead, are microscopic and easily absorbed through our skin's pores. We can also breathe the particles in and contaminate ourselves. Shooting outdoors reduces this lead exposure method, which is the major reason indoor ranges must have exceptional ventilation to be safe.

Most bullets are lead. The lead may or may not have a metal jacket covering. This type of ammunition is generally safer to handle; however, use extra precautions when using un-jacketed ammunition, where the lead projectile is completely exposed.

Collecting spent casings is another area where you can unintentionally expose yourself to lead and other unwanted heavy metals. For example, I have seen children collecting brass alongside their parents after a day at the range. This practice is especially concerning because children are known to stick their hands in their mouths.

The dirt is likely okay. Lead particles are not.

Cleaning your handgun exposes your hands to not only the fine coating of lead and heavy metal particles but the sometimes corrosive and unhealthy cleaning solvents.

Shooting your firearm does not expose you to massive amounts of lead; however, we should avoid any amount if possible. 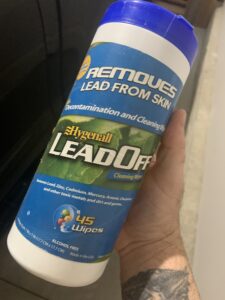 I like these wipes from Hygenall. The product also comes in a foaming soap and spray.

I recommend that you ask your doctor to check the lead levels in your body as part of your annual physical. In addition, it would be wise to have the levels of everyone in the family tested during their regular checkup.

Now you have another way to stay safe on the range. Let's be sure the lead is detrimental to the bad guys, not us.

11 Responses to Avoiding Lead Exposure- A Warning for Gun Owners