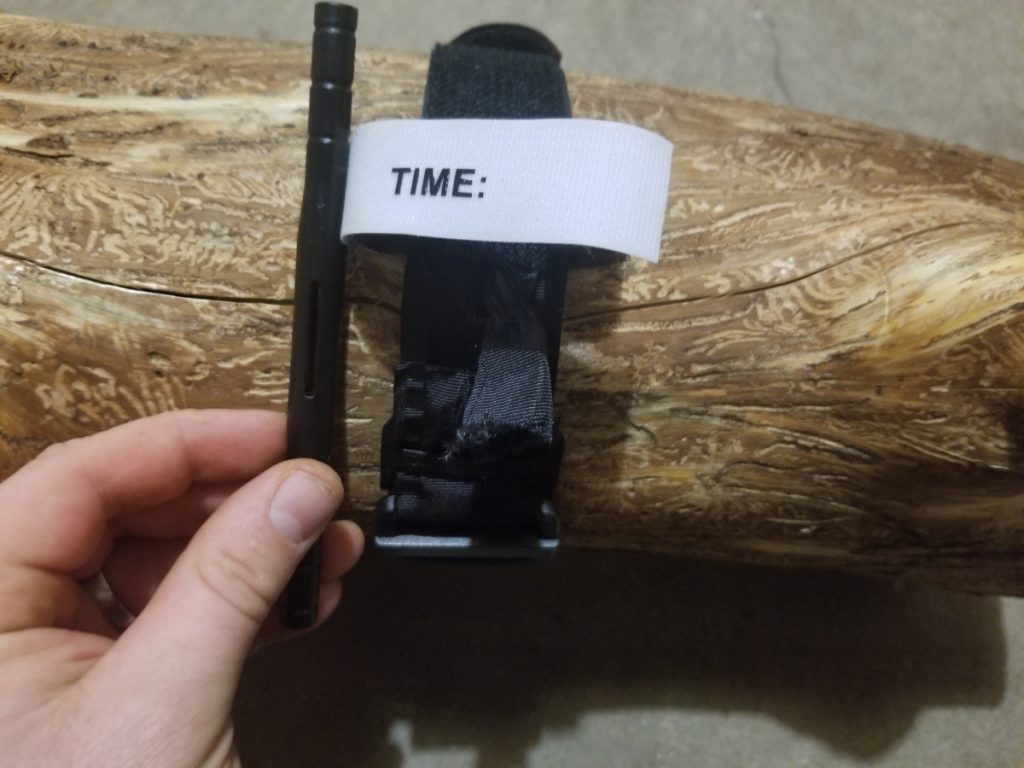 Walking through the woods one spring afternoon, you turn a bend in the trail and are surprised to see two brown cubs playfully rolling in the grass nearby. You watch, pleased for a moment, until a thought suddenly enters your mind. You freeze. You hear heavy breathing behind you.

You’re at home alone finally doing the house maintenance projects you’ve been putting off when you slip with the utility knife and open a long trench down your arm.

You’re driving through a nice part of town when someone tries to car jack you with your kids in the back seat. You handle it, but take a bullet through the brachial artery of your right arm.

There’s any number of reasons you might need medical supplies and a trauma kit is more likely to be used then that pistol on your hip, in all probability. Being killed accidentally is the most common cause of death unrelated to preexisting and chronic medical conditions. 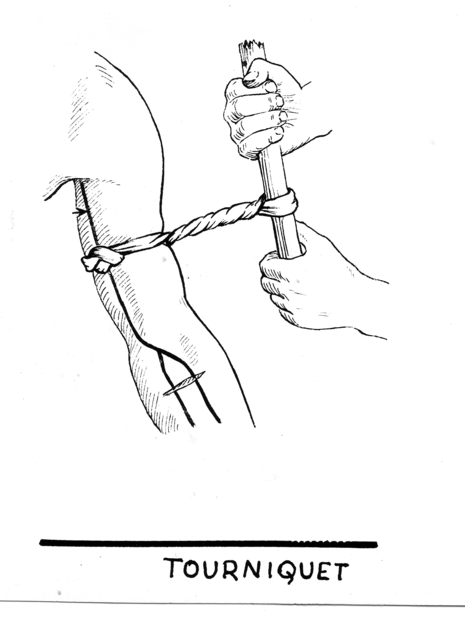 Note the placement of the knot to increase pressure over the brachial artery.

Having Trauma Equipment is Important

According to the CDC, in 2017 169,936 people died as a result of accidents, and Healthline reports around 60,000 Americans are killed by exsanguination (severe blood loss). The CDC, which uses the National Violent Death Reporting System (NVDRS) to record the number of people killed by homicides, reports that in 2017 19,500 U.S. citizens were murdered. This means you are 3 times more likely to be killed accidentally then by a criminal after your wallet.

It’s not hard to convince someone that a trauma kit is an important piece of gear, but many of us relegate them to our range bags if we bother with them at all. A range bag is a great place to keep a supply of medical gear, but not the only place you should have them.

Having a quality trauma kit placed in strategic locations throughout your home, office, and car helps keep lifesaving capabilities nearby for not only you, but those you care about.

Tourniquets are a trauma kit necessity. They save lives, there’s no squabbling about that, but not all tourniquets (TQs) have been created equal. In fact, some are unethically marketed as a life saving device, but are so poorly constructed it might be better if you had nothing at all.

I’ve heard rumors of counterfeit TQs from a few places and even had a paramedic friend from a large Denver hospital tell me a story of how his ambulance had been mistakenly stocked with these fake tourniquets by the company looking to save a few bucks on supplies.

This medic told me he was attempting to use a tourniquet he thought was a North American Rescue (NAR) CAT but soon realized this was not the case after the windlass broke when he tried to stop significant bleeding from a leg wound.

Rob Pincus with the Personal Defense Network (PDN) recently posted to Facebook about a TQ a friend purchased that was clearly not up to standards.

I decided to investigate for myself and obtained two counterfeit CAT TQs from Amazon to see if there really was a disparity. I first tested them, along with a NAR CAT, by cinching them down to a log in order to test the durability of the windlass.

Since the CAT is generally considered one of the best options on the market for controlling life-threatening bleeds, we will use these results as the baseline. 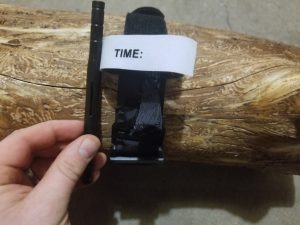 The CAT TQ took a total of 2 turns before I was unable to turn the windlass any further. I struggled with it substantially and attempted to get it to break but without success. I’m no wilting lily at 6’2” 250 lbs., and still didn't get the indication the windlass or any other part of the CAT was close to failing.

Then, I tested the TQs I found on Amazon. Not only did the counterfeit TQs take more then 8 turns to tighten down, but they both also failed easily at different points. Interestingly, neither of the windlasses actually broke. Part of the buckle broke on one, and on the other, the strap the windlass tightens down ripped out of the TQ altogether. 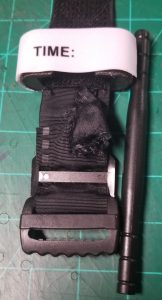 To be honest, I was expecting these outcomes, and with my suspicions verified, I sat down to write my article. But then a thought occurred to me:

“Am I being biased?”

The answer, of course, is yes. I have used hundreds of CAT TQs both in training and in real life and have never had an issue with one. I didn’t expect these Amazon knock-offs to hold up against the NAR CAT.

However, I realized, I didn’t take into consideration that, while these counterfeit TQs are not as robustly built as a CAT, surely, they would still be able to get the job done in a pinch. The Marine Corps Doc in me said: “If it’s all you have, better that then nothing right?”

Playing devil's advocate with myself, I acknowledged that I might have tightened these TQs down past the point needed to control bleeding.

Could the TQs still apply enough force to control an arterial bleed before breaking?

I didn’t know and felt the article would be incomplete before finding out. So, I held off writing until I purchased a new Amazon TQ. When it arrived, I did another test to see how effective it was at controlling bleeding.

Once again I began with my baseline by checking my pulse, then placing the NAR CAT on my left arm and, as with the log, it took 2 turns to tighten down. I then re-checked the radial pulse and found I had complete occlusion since I could not detect a heartbeat.

Next, the counterfeit. I was surprised this time to discover that, again, after 8 turns of the windlass, I could still feel my radial pulse. I’ll grant that the BPM was weaker on re-check, but it still took 4 X the turns of the windlass compared to the CAT, and without fully occluding the artery. 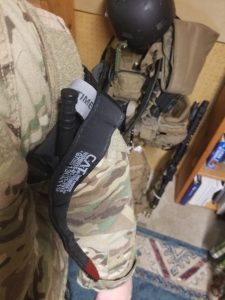 Since there is so much elasticity in the windlass strap, the additional 6 turns required to tighten the TQ means wasted time when you’re bleeding out.

Then, since I was using only one hand to secure the TQ, I frequently lost control of the windlass and under tension it unwound a few turns before I could grab and stop it.

This happened a few times on my way to the number 8 and added significantly to the overall time it took to get the TQ tied down.

I could only imagine this task even more frustratingly difficult if my hands were covered in blood like they’re going to be during an emergency that necessitates the use of a tourniquet.

None of the counterfeit TQs I tested are worthwhile in any capacity for trauma management. If I discovered that one of these TQs was the only commercial one I had available, I would probably take my chances with an improvised tourniquet first since I am confident in my abilities to control bleeding that way, even if not ideal.

How to Spot a Fake TQ:

Since these counterfeit TQs are meant to fool people into thinking they are legit, it can be hard to tell the difference from first glance. Here are some important indicators that your TQ could get you killed:

Quality TQs like the CAT have been battle-tested and approved for use by American warriors and go through a rigorous testing period, and are endorsed by the Tactical Combat Casualty Care (TCCC) committee. Ensure you are purchasing directly from the source, or from a reputable dealer so you aren't scammed into trusting your life to unscrupulous foreign companies. 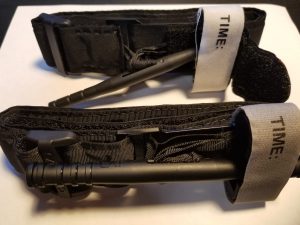 Side by side comparison: The NAR Combat Application Tourniquet (CAT) is in front and the counterfeit in the back.

A quick way to check your TQ is to look at the strap buckle which should say “CAT” two separate directions. And the windlass is also very different in style and has the word CAT in raised letters, 2 on each end. 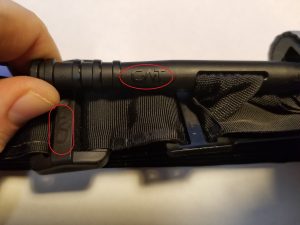 On the underside of the TQ under the windlass, you should see a large logo of CAT and then company information. 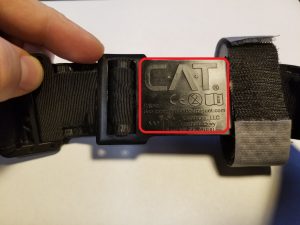 At the end of the strap you should see, once again, CAT printed in white ink along with other information including the NSN (National Stock Number). 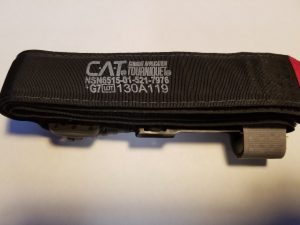 Fake tourniquets can be found for about $10, about a third of the cost of a CAT and this reduction of price can make these TQs seem like a deal. The ones I tested come up on the very first search for “Tourniquets” on Amazon and in the product description the customer is falsely told this extremely important device is: 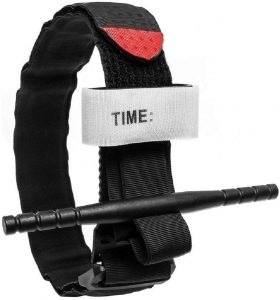 I found neither of these statements to be honest or accurate at any percentage. And you want the tourniquet you buy for the purpose of saving you or a family member from bleeding to death to do its job. Yes, the CAT is more expensive at just under $30, but $30 paid to save your life is money well spent and cheap considering the alternative cost.

I’ll go back to my original question:

“Could the (counterfeit) TQs still apply enough force to control an arterial bleed?”

Absolutely not. Not only are these tourniquets being sold in the U.S. by dishonorable overseas companies, every shipment that enters our borders is unusable trash. A type of dangerous and wholly irresponsible garbage. Worse? We've seen companies that otherwise appear credible that are including these counterfeits in the trauma kits they sell. We recommend you consider kits from Mountain Man Medical which we have thoroughly vetted and believe in.

If you discover a few of these lying around, please consider doing what I did and throw them in the dumpster.

*Editor's Note* We're hosting a FREE Combat Medical Training Summit, and you can sign up for it here. Again, totally free and you're going to learn from the combat hardened Navy Corpsman who wrote this article.

Episode 388: When a Navy SEAL Writes a Novel… with Jack Carr
The Fight For Gun Rights is Just Getting Started

4 Responses to Can Counterfeit Tourniquets [TQ] Work if It’s All You Have?