Join Our Newsletter
Shop Our Store
MAIN MENUMAIN MENU
By Matthew Maruster on November 7, 2022 in Politics

As of 2021, Tulsi Gabbard is no longer the State Representative of Hawaii, and just recently she left the Democratic Party, calling herself an Independant. I just found out that Tulsi Gabbard has a video show on YouTube appropriately titled, The Tulsi Gabbard Show. In a recent episode, Gabbard said:

…my views on the Second Amendment Have Changed… 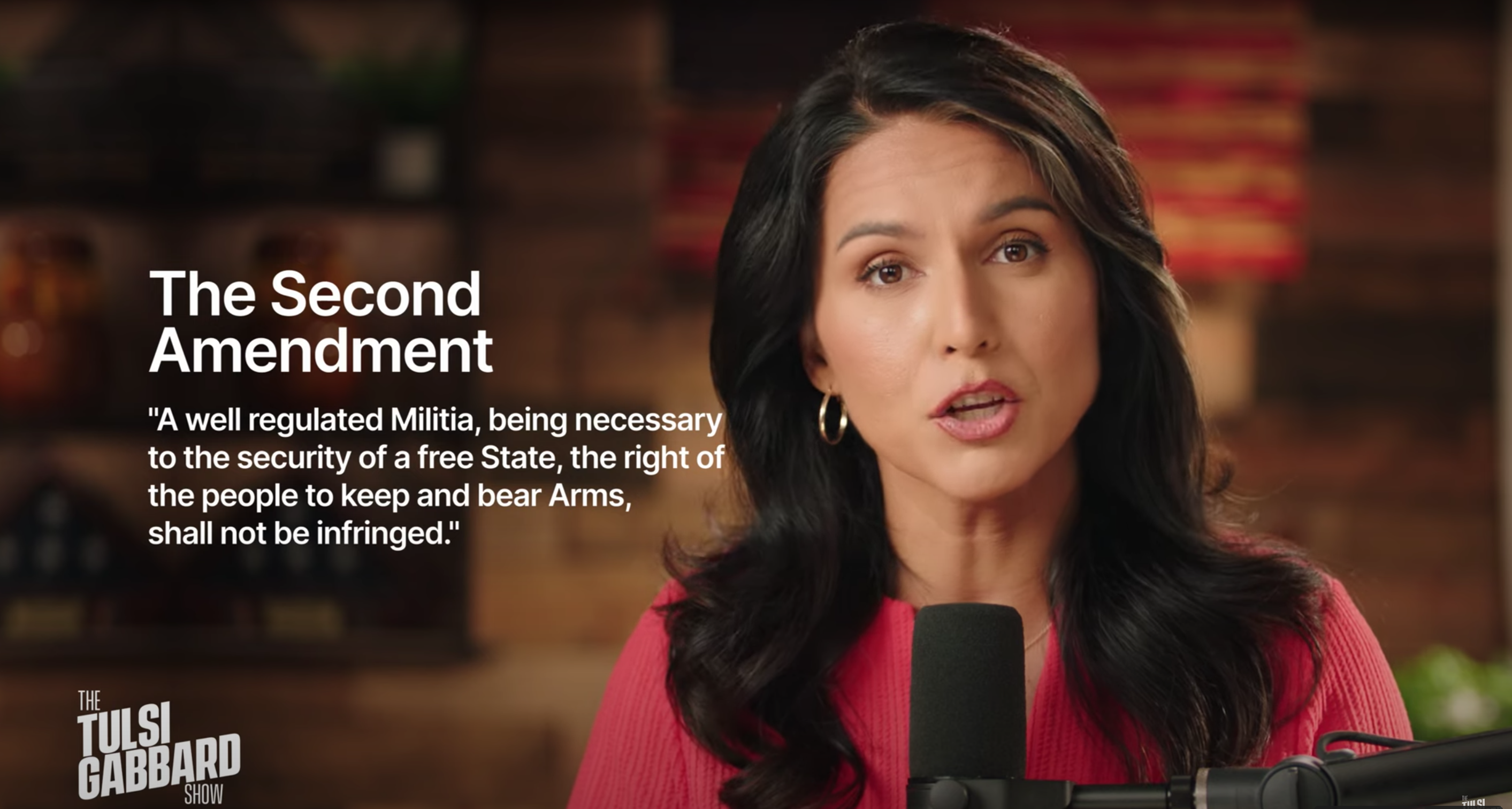 A video screen grab from the The Tulsi Gabbard Show.

Even though up until recently, Gabbard was a registered Democrat, statements like that might land her on a secret, domestic terrorist watch list. I'm just being sarcastic, well, at least sorta'.

Now I am as skeptical as the next person of anything a politician says. I haven't agreed with everything Tulsi Gabbard said or did as a member of Congress. I couldn't be more at odds with her supporting Bernie Sanders. Her past politics related to firearm legislation earned her an F from the NRA and also a 100% endorsement from the Brady Campaign Against Gun Violence. In a 2019 interview on the Rueben Report, Gabbard said the “NRA was part of the problem”. She also talked about the support of “strengthening” background checks that would include adding mental health records that HIPAA law would normally protect.

Tulsi admits that over time, her view of the Second Amendment Changed, and explains why in the video.

You can check out The Tulsi Gabbard Show YouTube page and watch the entire video by clicking here, or watch the embedded version below. I think it's worth watching the whole thing because besides speaking about what lead to her changed stance on the Second Amendment; she does a great interview with Louisiana State Representative, Steve Scalise.

If you're not familiar with Rep. Scalise, he is the man who nearly died in June 2017 after being shot while playing in a congressional softball game. In the interview, he describes what he remembers of that incident, how God's providence kept him alive, and how his faith in God and the prayers of believers made a difference in his healing. Like I said, it's a good interview.

From Tulsi Gabbard's Own Lips—

Again I would urge you to watch the video, but if you haven't yet, here is just one of her statements.

She says the reason for the Second Amendment is basic.

The Founding passed the Second Amendment out of a recognition that every one of us as Americans recognizes the right for every one of us, as Americans have the right to defend ourselves and our loved ones, and serve as a check on a tyrannical government that seeks to take away our God-given freedoms enshrined in the Constitution.

Now if your're like me, I once thought, that's not something we would ever have to do in America. Protect ourselves from a tyrannical government? This is the land of the free.

But as we see Democratic leaders in Washington continue to push more authoritarian-like policies, who are using law enforcement agencies, weaponizing them to go after political opponents, targeting law-abiding Americans as extremist and domestic terrorists for committing the offense of opposing the agenda of those in power.

We realize that our right to bear arms is the deterrent that our founders intended to push back against this threat of government tyranny.

In the video, Gabbard talks about the effect lawlessness and rising crime has on historically high gun purchases.

Expanding briefly on this point, many ‘news organizations' are using a recent study by a left-wing organization called Third Way, to prove that the lax gun laws of republican states lead to high murder rates. However, the study actually revealed that when 27 of the top 30 cities with the highest murder rates have Democrat Mayors. It's likely that activist DAs and judges, defunded/under-funded law enforcement, and other factors, have a bigger effect on violent crime and murder rates than a 10-round magazine ban.

From what I've heard of Gabbard in interviews and during the 2016 Presidential Primary, it seemed that she pushed back against the mindless regurgitation of party talking points as much as a politician from one of the two major political parties could.

I'm not making a political push for Tulsi Gabbard for any political position, and as far as I know, she isn't currently running. But to be fair, people's view of issues may change over time. And I think it is exceptionally important to listen to someone explain the reasons for their changed position. The same reasons that persuaded a Democratic Congresswoman to embrace the importance of the Second Amendment may be what it takes to help a friend or loved one see your side of things.

What do you think about Gabbard's comments about her changed position on the Second Amendment? What about her assessment that her former party is unrecognizable and the weaponizing of federal law enforcement agencies? Are you voting tomorrow?

4 Responses to Is Tulsi Gabbard an Alt-Right Second Amendment Extremist?