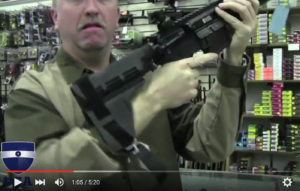 The ATF is currently waiting for us to comment on the pistol brace letter they recently released concerning their “objective factors for classifying weapons with ‘stabilizing braces.'”

Now I want to be completely clear here: I think it's obvious that the ATF is acting outside of their jurisdiction in an overreaching manner and we cannot allow this to stand without doing all we can (which includes all of us to comment during the open comment period taking place right now).

I'll address your concerns about commenting below, but first a little backstory.

They want to turn their arbitrary thoughts on pistol braces into rules and somehow into a law. That is NOT their job and overreaches their scope. To make matters worse, they want these “laws” unset, meaning that they can decide which braced pistol is actually an SBR and which is not on a case by case basis.

If they're allowed to get away with this, it can open the door for them to regulate whatever it is they want, however they want, which is not a good thing (which is why we need to tell them how we feel in a comment).

I want to encourage you to make a comment on the letter as I am in the process of doing. They have issued some guidelines on how to comment and we should listen if we want to be heard. They've said that any comment that is profane in any way or one that may hurt their little feelings will not be considered.

But obliterate them with your niceness.

The letter the ATF released on pistol stabilizing braces, regardless of how you feel about those devices personally, is purposefully meant to be vague so they can continue to decide and regulate on things in the future as things change.

Because it is so utterly vague, the stuff in it cannot be allowed to be made into “law” because it will essentially turn at least hundreds of thousands of gun owners, if not millions, into criminals overnight.

I do believe their letter on braces was made to be vague on purpose, and that purpose is so that they can restrict the number of AR-15 pistols on the market (which won't work as we'll see in a moment).

At least a portion of the problem with their approach is that there is no standard by which we can follow to “remain compliant” with law.

Making matters worse is the fact that it doesn't seem like the piece of plastic itself (AKA pistol brace) is even what is being looked at. Instead, it looks like the firearm as a whole is being looked at, as the ATF assigns arbitrary regulations about a specific gun that will ALWAYS vary from one person's setup to the next.

Why do they always vary? Because people come standard in various shapes and sizes. For example, I'm 300 pounds and 6'4″ tall, and my good buddy and Concealed Carry Podcast co-host Matthew is 89 pounds wet and at least a full foot shorter than I am.

If I have my braced pistol setup a specific way it likely won't work for him as well as it will for me.

Other arbitrary rules they're considering are things like the caliber of the weapon, where the optic sits, the length of pull, and other things that will be different from one person to another.

And again, if there is no standard they're hoping that law abiding citizens will just not own these devices.

I'd like to insert here one simple fact that the ATF may or may not be forgetting, and it's that you can shoulder a buffer tube just fine. So, what's the real problem here guys and gals?

Another important thing to note is just how the ATF flip flops from one ideal to the next. Just a few short years ago the BATFE decided that pistol braces were fine. Then they were only fine under certain circumstances. Then they were fine to be shouldered sometimes. Then they weren't. Now there is a full on war against people who own these devices.

(Insert the watering of the Tree of Liberty, here.)

And I want to be perfectly clear on something here, only law abiding citizens are using stabilizing braces on pistols. If a criminal wanted to use this type of firearm in a crime they would just stick an actual buttstock on it. Why? Because they don't care about laws.

But they're not using this type of firearm in crime because it doesn't make sense for them to. This is NOT an “assault weapon.” This is a defensive tool that can be used by people with disabilities, physical problems, and strength issues.

The ATF is trying to make it harder for smaller women who can't wield a full-size AR-15 with a 16 inch barrel to protect her children in her home.

We need to comment on this letter before the expiration. All of us need to do it regardless of our thoughts on pistol braces or even if we own one or not.

I know that a lot of folks have said that they would not make a comment because they don't want to put their name on a list. Well, I've got news for you my friend — you are probably already on a list somewhere.

Chances are excellent that if you've ever bought any gun items with a credit card, filled out a form 4473, asked for directions to a gun store from Google, or even read or watch gun content … you're already on a list.

Now it's time to stand up for something. Leave a comment on this page here so we can fight this together.