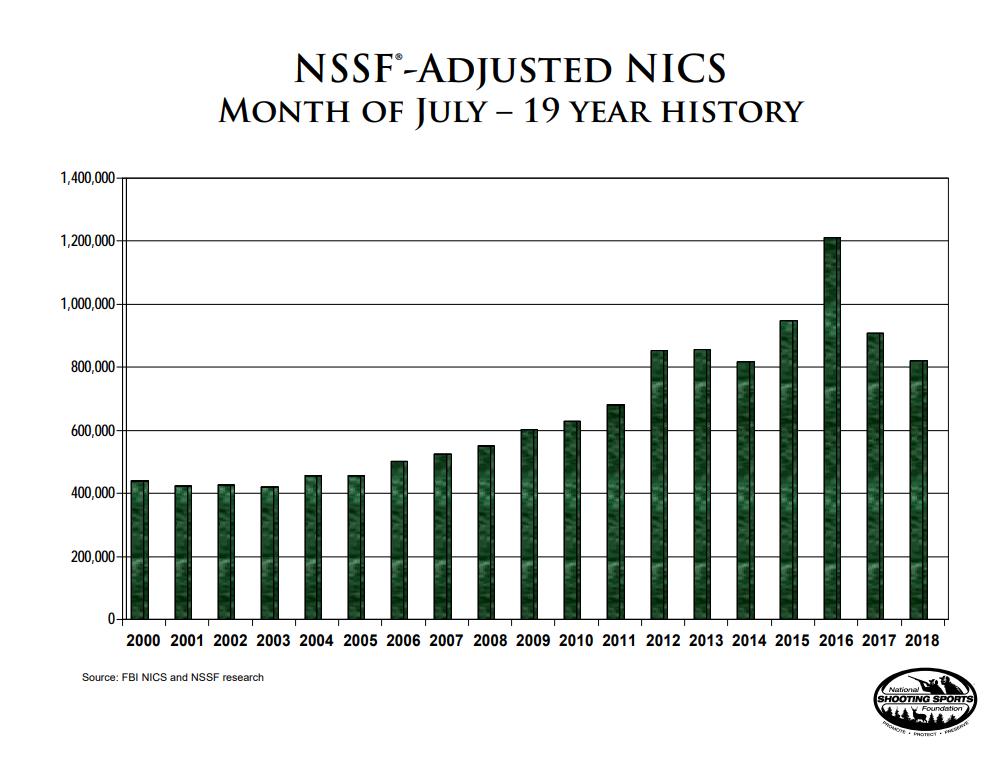 This chart represents all the July months for the past 19 years. This past July was a train wreck.

I wanted to take a moment of your time to discuss something that almost nobody else is talking about. The gun economy. What is the gun economy? Good, honest, hard working American-owned businesses who sell stuff we love like guns, holsters, tactical gear, optics, etc. The gun economy ranges from big gun manufacturers like S&W and Ruger, to holster manufacturers, to gun shops, and everywhere else in between.

People aren't buying as much as they used too. The industry isn't necessarily in such need that we'll all go out of business, but some companies have already gone under. Others have filed bankruptcy. Still others are laying people off or having to otherwise restructure.

And of course there are others that are doing just fine because they have a smarter biz model.

I know a lot of different people from the industry. I talk to some of them on a regular basis. I frequent gun stores, talk to holster manufacturer owners, heck, I even know people high up in some gun companies on a first name basis. This isn't me bragging on who I know, but just me trying to support what I'm about to say:

The gun economy is struggling right now, no matter what anyone tells you.

The rest of the economy seems to be doing okay, but there is a reason why even some non-industry companies are offering sales on such a regular basis: Because they're not selling enough stuff, otherwise.

Here's the deal, if more of them go out of business it'll drive competition down–in any industry. When competition is down those companies who've won have more freedom to charge more money for goods because there are less of them selling it.

That's one of the reasons why I try to only shop at Amazon as a last resort. Amazon has the capability to put everyone out of business just because they've taken advantage of the simple fact that people are cheap and lazy. I don't mean to offend you, but you know it's true.

They've even forced Wal Mart to change their business strategy to some degree. And, when was the last time you saw a Books A Million, Borders, or Toys R Us open for business? The last solid position in either category, books (primary) and toys (secondary) is Barnes and Noble. Back in 2011 there were over 1,000 B&N stores, with under 700 remaining today.

Furthermore, I just read an article in October saying that they were potentially going up for sale or otherwise looking for a miracle to stay open.

Once Amazon is the only place where goods can be bought, they'll have the option to raise their prices simply because they can. Then if and when Amazon decides, the cheap things you've gotten used to will be no more.

The same is true of the gun industry. I know, I know, Amazon only lets us sell certain things there–and guns ain't one of them. That's not the point, though. If you enjoy going to Bob's Gun Shop on Main Street, but refuse to go spend your money there, Bob is screwed. Go buy something from him before you no longer can … before the only place you'll be able to find a limited supply of guns (AR-15s excluded) is Dick's.

There is something you can do, though. Go buy something. Anything.

If you've been thinking about buying that new gun, don't delay because that purchase could be the deciding factor between your local retailer going out of business or not. Don't just buy local, though. If you've been eyeing something from an American-Owned small business from a different state, there is nothing wrong with having it shipped to your house. Go for it.

If you don't, the results could be disastrous for the small guy, leaving Dick's unaffected. Now let me insert a shameless plug to our online store, just in case we carry some of the stuff you're looking for. Hey, we're a business and businesses need money to pay the bills: 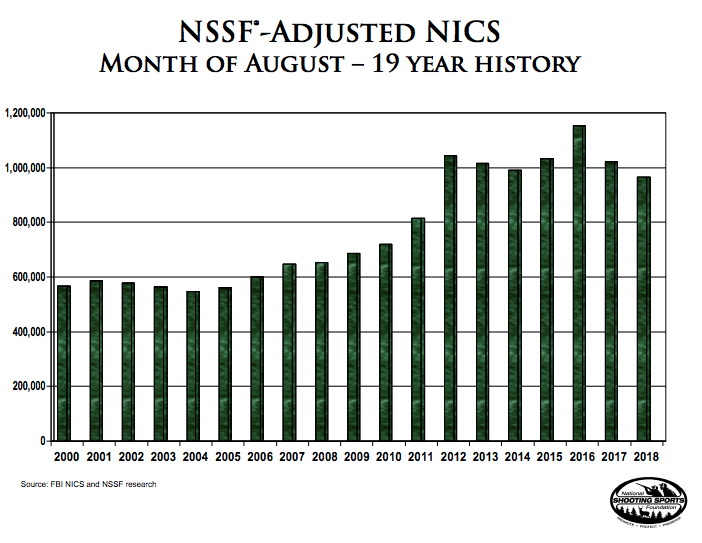 While August was up from July, you can see that it's still trending lower from other August months. It's the worst August since 2011.

On a different note, there are a few things that can be done by the law makers, if they'd just get off their arses and do what we elected them to. Then again, with the mid terms right around the corner, there is a chance that it will never happen.

There is a chance that we are screwed.

The firearms and outdoor economy can be jumpstarted by passing a couple of bills.

Sadly, it seems as if what was so exciting when our current administration took office is nothing more than a pipe dream, and, as usual, our gun rights get pushed to the side. Is it ever enough to just have our rights not be in jeopardy?

I don't think so. I really wish someone would actually make promises for gun rights, and keep them. But, they don't and now our gun economy is struggling. There is no fear buying right now, which our industry is very guilty of during the previous administration as can be seen in all the charts I've placed from the NSSF. 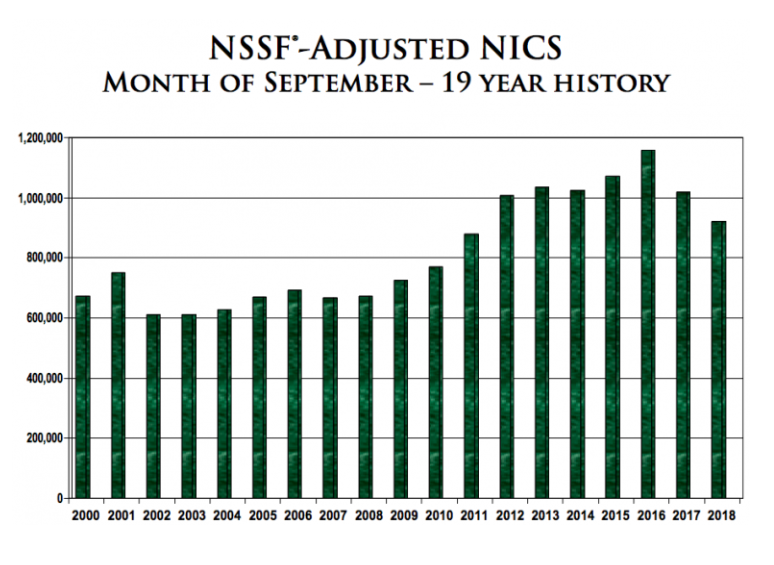 September is trending down from August, showing a bit of a roller coaster ride. This year's September is the worst since 2012.

Because there isn't any fear that anyone is coming to take our guns and no new laws have been passed, we continue to move forward at a snail's pace, hoping for the best.

Either way, you can help. There are two things you can do. First, go buy something. Not just one something, but a few somethings. Spread it out and tell your friends. Not all gun stores in all parts of the nation are hurting right now, but many of them are. Go support them.

Two, go vote on the 6th. You must. But, it cannot stop there. These people need to be held accountable. They told us they were going to be doing something, or at least alluded to it, and aren't. They need to understand that we are in charge and they report to us. 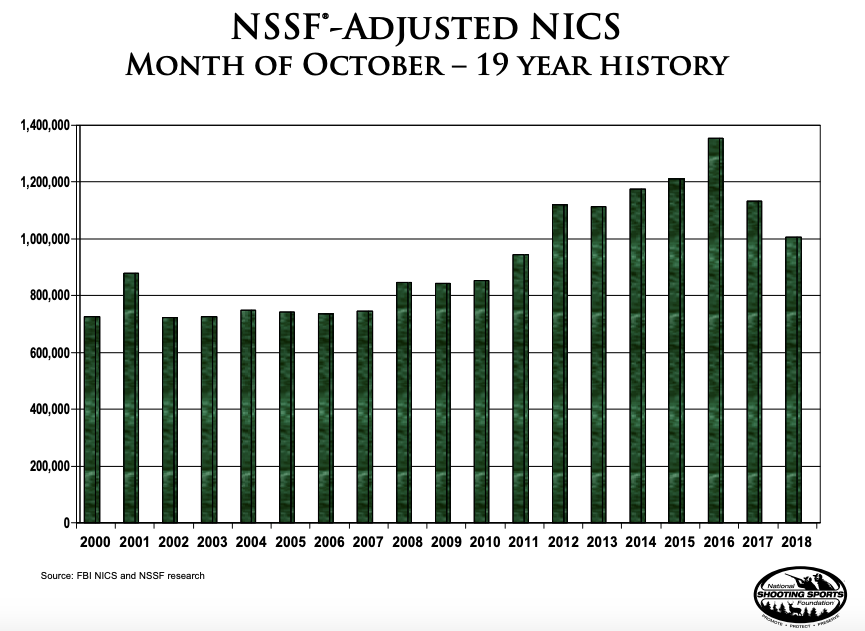 While October is trending up from September, it's still the worst October since 2012.

It is no longer enough for them to just say that our gun rights are important. Actions are far louder than words. We need to make them take action, and we need to do it now. What say you? Let us know in the comments below.