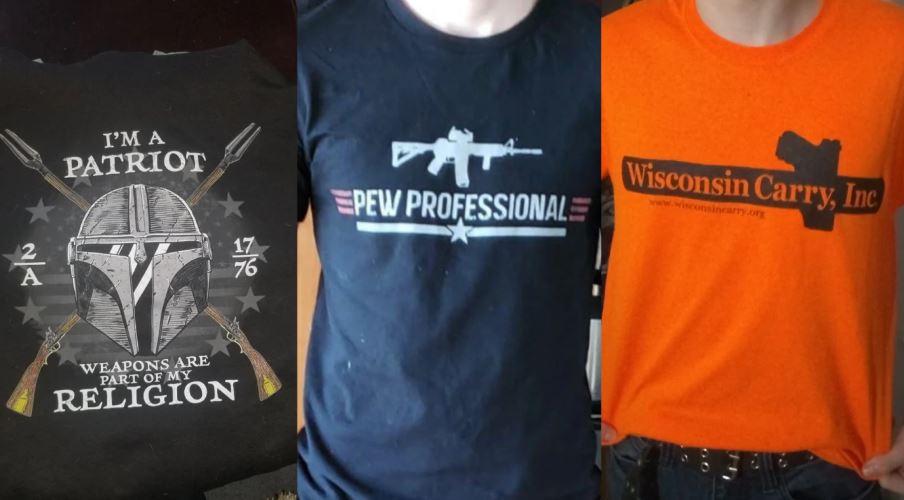 Credit: John Monroe, taken from WaPo's article linked to below.

We live in a world where it's okay for teenage girls to dress like they're going out for a night on the town, teenage boys to allow their trousers to drop so low that their entire butt can be seen, but any shirt showing the picture of a gun is considered offensive.

In fact, it is considered to be so offensive that schools in Wisconsin are banning gun-related t-shirts on campus.

Two high school boys (and one in middle school) were sent to the principle's office and were ordered to cover up their t-shirts with jackets. And in the future, they've been banned from wearing any gun-related clothes on school grounds in what is being called a clear violation of their First Amendment right.

A letter went home to the parents citing concerns of violence in the school because of the t-shirts. Furthermore, both schools said that the t-shirts violated dress codes with one saying they had to create “a safe and orderly learning environment” for all students.

The families, who identify themselves as hunters and proud gun owners, are suing the school districts, claiming the dress code is only selectively being enforced.

John Monroe, the attorney for the families involved told the WaPo:

They’re protected speech. It’s absurd how wearing a shirt to school would have anything to do with school safety.

Monroe also says that they have a precedent in a previous case as an injunction that was issued in 2018 in the U.S. District Court for the Eastern District of Wisconsin. The precedent stated that a different high school could not prevent its students from wearing gun-related shirts while on school grounds.

The school administration, however, says this:

While time will tell how this whole case pans out, perhaps the most disturbing part of this entire thing are the comments in the linked Washington Post article showcasing the ignorance of the anti-gun people.

So, right here up above this text you've got Kristin claiming that nobody wants to take our guns, but then in the comment right below, you can see that at least one person out there believes the opposite —

I'm not even entirely sure what to say about this one, but this seems like one heck of a blanket statement to be making —

I don't know the motive behind the families wanting to sue, but I can say that we wouldn't be in this mess if people weren't constantly threatening to take the Second Amendment away from the “gun nuts” out there. If we weren't pushed so far, this wouldn't even likely be a thing.

And, regarding the below comments about the Virginians standing up to their government, there are a lot of things going on there. Yes, they dressed up like “commandos” but, guess what? Nobody was hurt. Not a single shot was fired with 22,000+ people there, AND, we picked up our garbage when we were done with the rally.

That is much more than our opponents have ever done. There is always mass violence, fighting, and nobody ever picks their trash up. 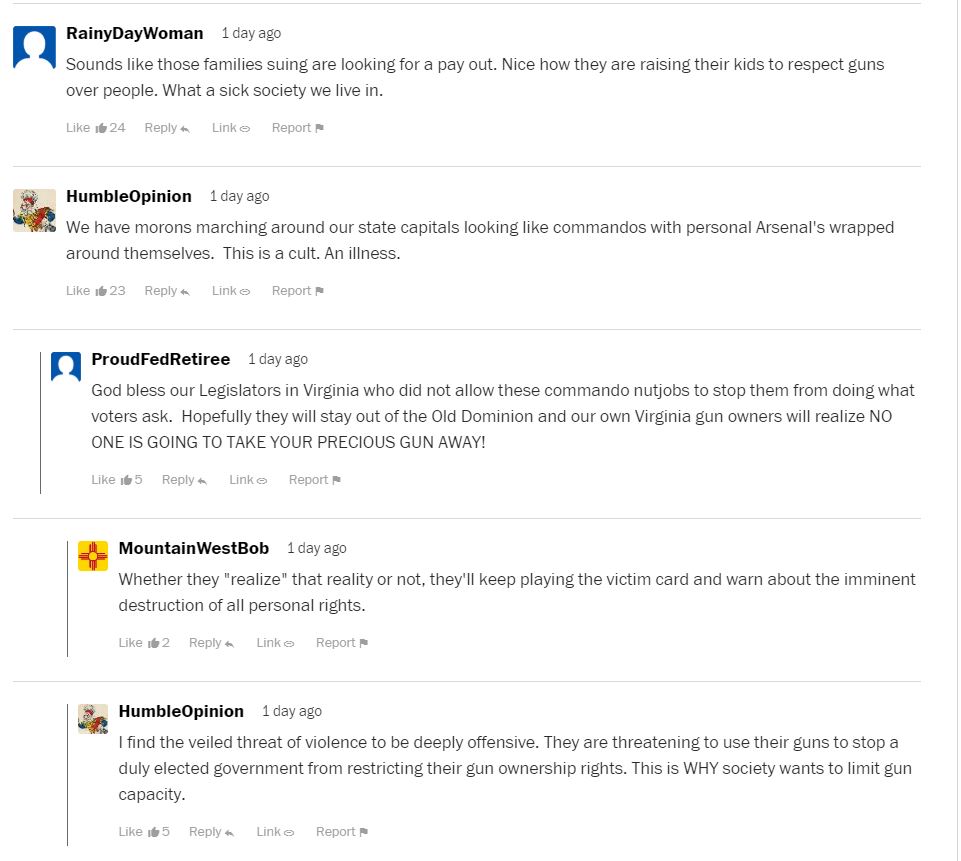 And, to the last humble opinion, I find the threat of violence to take away our guns deeply offensive. Hence the need for our guns to begin with.

Our opponents are not only uneducated about firearms, the Second Amendment, and the things they accuse us of, but they, sadly, don't even care to learn.

So, this was kind of two articles in one as I shifted topics there, but I couldn't ignore those horrendous comments.