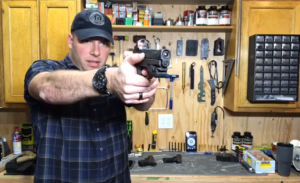 It should go without saying that retaining control of your firearm during an actual fight is important. That is not what this is about (even though our lead picture is probably misleading). Instead, this is about the rest of your life.

If you didn't know, retaining control of your firearm during all parts of the day and all aspects of life is actually pretty important. The reasons why are hopefully obvious, but in case they're not, one of them is because we want to prevent someone else from getting our guns who may use them against us on purpose, or on accident (like we'll see in the real-life incident below, that inspired this article).

And just so we're all on the same page when I say “control” I mean in the holster on your body or similar. I don't mean on the floor of the bathroom while you're taking a crap at the gas station or anywhere else.

My days usually consist of the following: Wake up, get cleaned up, put on clothes, put on gun, conduct regular work and life, change at end of day, put gun back in bedside quick access safe, go to bed.

Obviously there's more to it than that, but I'm trying to prove a point. What's the point?

At all times during the day and night I retained control of the firearm. I never took it off and generally don't leave it anywhere for someone else to get to.

Either it was on my person inside my waistband or it was in my safe. There was never a point where I took it off in the car, or placed it on the window sill or toilet dispenser while dropping a deuce, or anything else. At all times I retain control of my firearm.

And yes, putting it in the safe is retaining control because I'm the only one with the code to open it, unless there is a determined thief who can somehow get it out of my house without me knowing.

Most gun carriers do the same or similar to what I described above. But there are some folks who don't — like a story I just read where a 4 year old shot his grandmother in the stomach after finding a revolver in their RV.

Those people in that RV were traveling back home to Virginia from a vacation. At about 12:00 pm last Sunday the family stopped at the Carlie C's IGA in Erwin, NC.

The four year old reportedly stayed in the RV with his grandmother as the rest of the family went inside the store.

The kid found the revolver, and the grandmother attempted to take it away from him/her. But when she attempted to disarm the child the gun “went off” striking the elderly female in the stomach area.

She was taken to the hospital, treated, and is thankfully expected to be okay. The thing about this that pisses me off has nothing to do with the kid. That child will only know so much as his parents and grandparents teach.

But even if you're teaching your kids about guns, and I hope you are, at four years old some kids have a hard time distinguishing from what is acceptable or not.

Because of this, the gun should have been in someone's control. And by “someone” I mean other than the 4 year old kid. Ideally, when I say “control,” I mean that the revolver was on someone's body or in a safe or lock box to keep the gun out of the kid's hands.

A portable safe, like one of the smaller ones on this page, is totally fine and sufficient to keep even the most curious of little hands from touching something that they can't yet fully understand.

Just lock the thing up. Or wear it. Whatever. It really isn't that hard of a concept to grasp.

A child of any age should not have access to a parent's gun until that kid has been trained properly. We recommend the following articles talking about children and guns:

Teach your kids about guns.

When to talk to kids about guns.

10 Responses to The Importance Of Retaining Control Of Your Firearm