Join Our Newsletter
Shop Our Store
MAIN MENUMAIN MENU
By Matthew Maruster on March 30, 2022 in News

Earlier this month, Arizona Senator and Assistant Minority Leader Lupe Contreras made a comment that was so awful that most wouldn't believe it had they not seen the video. 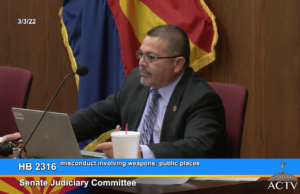 Before jumping to the video, I want to set the context. The topic of gun rights made its way before the Arizona Senate Judiciary Committee as the public had the opportunity to speak on HB 2316. The proposed bill would expand locations where concealed carriers could lawfully carry a handgun to include additional government and public places and events.

A woman called Lauren Snyder from a women's gun rights group called the DC Project testified before the committee. Lauren explained why she supports HB 2316. Here is what she said:

I don't carry because I want to harm others. I carry because I don't want to be harmed. My right to defend myself shouldn't change simply because of my physical location. The last time I was assaulted I was in a public space, not allowed to carry my weapon. I was stalked by somebody and he attempted to abduct me, and tried to drag me to his vehicle.

And so because I was respecting the law, and was defenseless, mind you, I'm differently-abled [holds up walking cane] I don't have the privilege of running away and calling the cops and waiting for them to come. I have to defend myself.

I yield the remainder of my time. 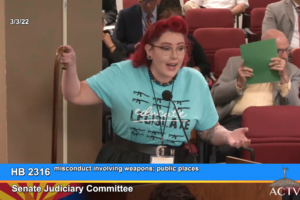 When it came to Senator Lupe Contreras, he voted against the bill and said this:

Mr Chair, I've said it many times, I'm a gun owner, I'm a hunter, and I'm a proud Democrat.

Why even walk around at that point? Stay home behind closed doors.

I'm not gonna' worry, ya can't be worrying about things all the time. I have enough to worry about being in these chambers. I mean, I hate to keep hearing about all this stuff. I mean I understand there's things that happen out in life.

At this, Lauren walks back up to the podium and says nothing.

I will say this, people will talk about how being safe, I don't feel that a room full of people everyone with a gun is going to make me feel safer. It's not going to make me feel safer, because people in this world are pretty crazy. They are pretty crazy out there. And you just don't know which one, which one is losing their mind and which one is not. And some of them do come through these doors and into these buildings.

As with most narcissists, the Senator makes everything about him. The way he feels is what is most important. If he doesn't feel worried about being assaulted, neither should you.

Senator Contreras' argument is so dumb that he dismantles it as he speaks. He says people shouldn't be walking around scared all the time. Yet he worries that someone that he doesn't approve of might have a right to carry a firearm. He also worries that people are losing their minds all the time, and you never know which person it's gonna be.

Contreras tried to soften his obviously condescending and idiotic words by saying he wasn't addressing Lauren specifically. But listen to HOW he talks to the woman. He doesn't care about her, what she said, or anyone else who doesn't think like him.

You can see the entire video below or by following this link. Lauren's testimony begins at the 1hr 17min mark. You can see Sen. Contreras' comments at the 1hr 22min mark.

Why Use Hollow Point Ammo in Self Defense Carry Guns
S5E15: 7 Clichés We Wish Would Go Away