Join Our Newsletter
Shop Our Store
MAIN MENUMAIN MENU
By Joshua Gillem on November 9, 2018 in News 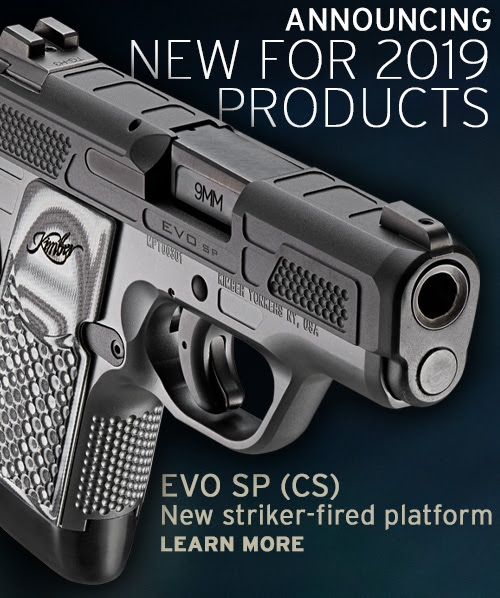 1911 pistol manufacturer Kimber entered the revolver market just a few short years ago. While many folks thought their wheel gun would fall flat on its face, it has proven to be a great platform for those revolver-loving folks, much like myself. They shocked us when they entered that market, and I want you to be prepared to be shocked again.

Kimber has entered the striker-fired pistol market for 2019, and have also made a few other releases that may fall between the cracks with the news of the EVO SP.

While we don't know much about it at this point, based on the press release we were sent we can say that there are going to be a few different models of this compact handgun, chambered in 9mm.

The press release boasted all metal construction and while we can't say for sure what “EVO SP” stands for, we can make speculations as to its meaning. Is this the EVOlution of Striker-fired Pistols? Time will tell, and I can assure you that when the time comes in just two short months at SHOT Show 2019, you'll find out just as quick as we do.

After some research, we've found the MSRP to be starting at $850, going up much higher from there. Which, to me, seems to be a bit high considering the current landscape of the pistol market with very reliable guns from aggressive competitors. Still, Kimber may be on to something, here, and we will remain glued to the computer to find out what the magazine capacity is. Once we find out, we'll let you know.

The mag capacity is one major thing that could set this pistol apart from said competition, and I'll try to reserve any judgement until we find out just what that is. By the looks of it, it does seem like a single stack design.

Other new releases include the newest iteration of the K6s DA/SA revolver, and the newest Micro 9.

Make sure you stay tuned because we are starting to enter that season of new releases, albeit a bit early. Still, with SHOT Show just 74 days away as of this writing, it'll be upon us soon.