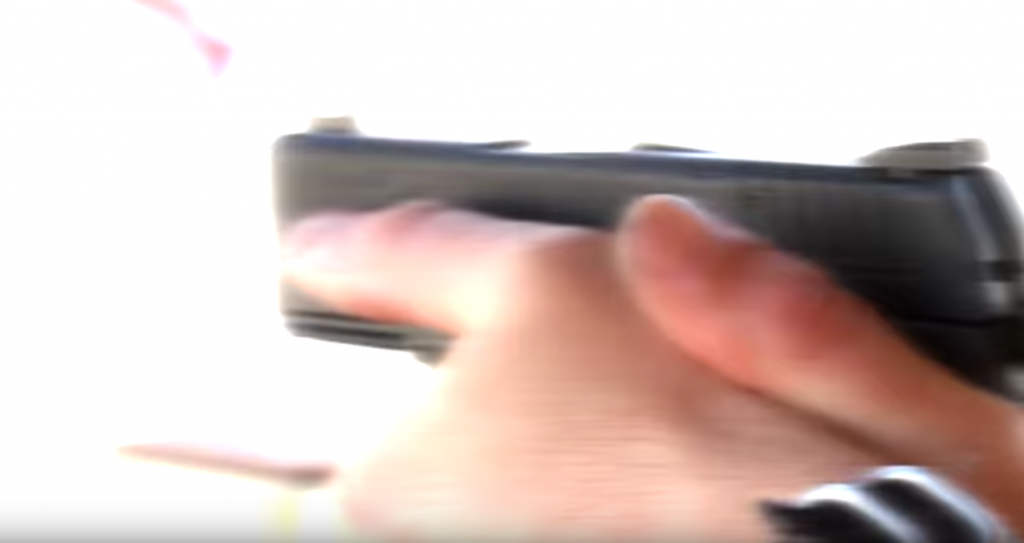 UPDATE: We have learned more details about this new pistol, including what it will be called. Read here…

What could this new pistol be from Springfield Armory?

Just today Springfield Armory announced a completely new pistol from the Geneseo, Illinois-based gun manufacturer. In a teaser video (video below) they show it being put through some drills and paces, but the gun itself is not being released to the world until later this week at the 2017 NRA Annual Meetings and Exhibits in Atlanta, GA. In fact, in the teaser video, they have blurred any evidence of the gun, so we don't get any idea as to what it might be…until the very end where there's two very quick frames that seem to show a handgun that doesn't quite match up with anything in their current lineup of products.

I managed to freeze the frame right at the precise moment, and the result is the blurry image in the header of this article.

From what we can see, it appears to be a striker-fired, compact, full-length dust cover frame, semi-auto. It's definitely not an XD-based pistol, at least as far as the slide is concerned. This new one appears to have a slide that is sloped at the rear. So it is either something completely new, or if it is related to the XD lines of pistols, it's going to have a slightly different shape.

Many people are wondering if it might be the first pistol from Springfield that doesn't incorporate a grip safety. There are many gun owners that do not like grip safeties. It is viewed as another mechanical part than can fail. Some see it as an opportunity for your gun to fail to fire because you failed to get an adequate grip on it to disengage the grip safety.

I'll grant you those arguments, but I personally have owned several Springfield Armory XD and XDm pistols; have fired many thousands of rounds through them; have abused them in all sorts of nasty, dirty environments; but I have never had a problem with one. I do not have a problem with using any of their guns for self-defense or using them in the highest levels of competition shooting.

Regardless, I wouldn't get my hopes up too much about them abandoning the grip safeties. At least if they do, that really would be a surprise announcement later this week.

Oh, and I think it's going to be made in America!

Stay tuned, I will be there first thing Friday morning at the NRA Annual Meetings & Exhibits to personally lay eyes and hands on it, and we'll see just what it is that Springfield Armory has spent the last 2 years behind closed doors working on.

What do you guys think? What would you like to see from Springfield Armory next? Let us know in the comments below…

Heckler & Koch’s VP9SK to be Introduced at the 2017 NRA Annual Meeting
Episode 115: Man Shoots Son Trying to Run Him Over With Car