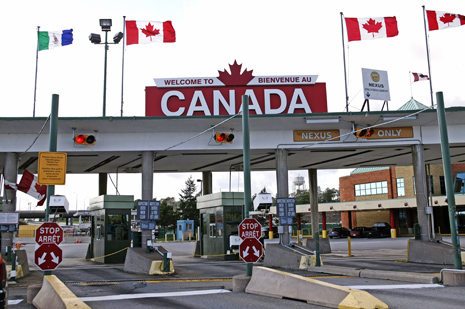 Photo courtesy of the New Yorker

In recent weeks there have been some issues at our Northern border involving tourists heading into Canada with concealed firearms. This has caused the Canadian border patrol to put out reminders for U.S. citizens traveling to the country as to just how Canada handles guns.

It’s obvious that a different country will have different laws, but a lot of Americans see Canada as an extension of itself sometimes, when it comes to guns. The idea of hunting in the Canadian frontier is a romantic view that many Americans have, and while it is true that Americans can bring guns to Canada for hunting trips, it is not the case for concealed carry.

“Non-restricted firearms can be used for hunting purposes and protection against wildlife in remote areas.” according to the Canadian Border Services Agency. “But the use of firearms for personal protection, or protection of property is not deemed a valid purpose to import firearms into Canada.”

This reminder is due to two separate incidents in recent weeks in which Texans entered the country with handguns, a shotgun, and loose ammunition in their cars.

In each situation, the tourists were also handed $775 USD fines, had their firearms confiscated, and were barred entrance to the country.

Now while these situations were the ones mentioned in the report and as the reason for the Canadian government’s reminder, they were hardly the only incidents. From January to June of this year, 413 guns were seized at the border, both from smugglers as well as concealed carriers. The figure is up from 386 guns seized during the same period in 2015, according to government figures.

The Canadian government is also worried about its recent rise in violent crime, and is attributing some of the statistics to gun smuggling from the United States.

So if you are a concealed carrier, and take a look at a reciprocity map to know whether or not you can take your gun to a specific state, just view our neighbors to the north as one big no carry zone.