In this country there are many states who require little to no training in order to obtain a concealed handgun permit. While this increases the number of people who have permits in those states; it also puts those permit holders at a disadvantage when it comes time to cross state lines.

States Often Choose What Permits to Honor Based on Training Requirements

We all know that since the birth of our country, the states have been viewed as their own entities, even if they are united together under one star-spangled banner. This means that each state's laws are going to be a little bit different with regard to pretty much anything. Look at the legalization of recreational marijuana for example. In some states it is perfectly fine to walk into a store and purchase it, but in many others it could land you with some serious jail time.

But this isn't about marijuana. This is about your right to carry concealed, and while the second amendment allows you to bear arms, different states have different rules about how you can bear those arms. There are many different stances around the country regarding the level of training that state governments feel is necessary to carry concealed.

Let's take Idaho for example. The map on the LEFT is a map for someone in Idaho who has the basic resident concealed carry permit. As you can see, there is quite a bit of red on the map, and unfortunately for Idahoans many of the states are on their border. However, let's take a look at the improvement that comes about when someone receives the Idaho enhanced permit (Map to the RIGHT). 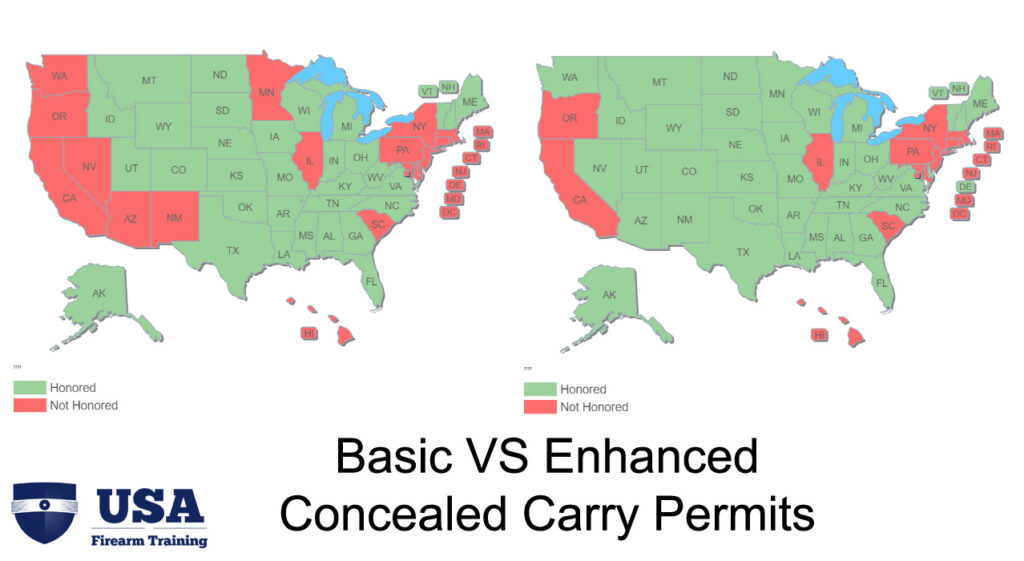 So if you live in a state where it is an option; there is nothing blocking you from getting one of these enhanced permits or obtaining additional permits from other states that issue permits to non-residents. All an enhanced permit really takes to receive is a little bit more in-depth training, and firearms safety. Not all states are yet offering these enhanced permits, and even with an enhanced permit there are still some states around the country which still will not allow concealed carry. However, what is clear, is that if the opportunity is within your area, it's a good idea to add on the enhanced permit, especially if you want to keep yourself safe and do some traveling out of state.

The Easiest Way to Research What States Honor What Permits

Now it is apparent that the system that's currently in place still does have its shortcomings, but it is what we as gun owners are forced to deal with and with all of the changes that can occur every time you cross a state border, you need to plan accordingly. There is a lot to know and a little bit of studying can go a long way, and is a much better and much shorter use of your time than suffering through the legal system. That is why, we here at USA Firearm Training have developed a handy Concealed Carry Reciprocity Map Builder so that you can take a look at what states accept your concealed carry permit, as well as what states you would need to get a non-resident permit in order to bring your concealed carry firearm with you, when you visit. It's what we used in this article to show you the differences state to state and we've worked to make the map's setup as simple and user-friendly as possible. All you need to do is put in the state, in which you have a residential concealed carry permit, whether or not you have the enhanced version, as well as any non-residential permits you may have, and the map will populate with where you can travel to without incident. Just remember, for the map, red means no and green means go.