Yep, you read that correctly—keeping people on the No-Fly List from buying guns is a BAD idea! 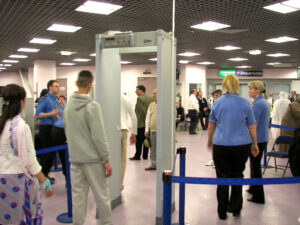 Pres. Obama is the Master of Spin, of spinning words, issues and current events into an agenda that suits his political ideals. An example of this is the way that he took the massacre in San Bernandino, the context for when he offered the statement above, almost to imply that the two terrorists responsible for the heinous act might have been prevented if people on the so-called “No-Fly List” were prohibited from purchasing or owning firearms.

The fact is, however, the two terrorists (who shall not be named) were not included on the No-Fly List or the broader Terrorist Screening Database of which the No-Fly List constitutes a part. So even if a “No Fly, No Gun” policy had been the law of the land, it would not have kept the husband-wife terrorist team from obtaining their weapons. (Then there’s the whole issue where one of their associates had actually been responsible for procuring some of the weapons.)

USA Firearm Training has decided to take a look at this ever-increasing-in-popularity policy and the 3 major reasons that make this proposal a bad idea and quite possibly illegal to implement.

The right to keep and bear arms is the critical 2nd Amendment to the U.S. Constitution that guarantees the privilege of purchasing and possessing many types of weapons. But another Constitutional provision is the 5th and 14th Amendments’ unequivocal declaration of due process. Currently the criteria that determines whether someone’s name is placed on the Terrorist Screening Database or the No-Fly List is a secretive and classified black box. This is done rightfully so as we don’t necessarily want to broadcast the criteria or the lists themselves to our enemies providing them an opportunity to find ways around them or to change their identities. Someone does not discover that they are on the list until they attempt to fly and are told that they cannot.

But what happens if someone is mistakenly added to the list (and this does happen–see #2 below)? There is not an adequate and transparent process in which a person can appeal to the federal government to have this corrected! If this were applied to gun purchases as well, then without due process, a person’s 2nd Amendment rights could be infringed. How can due process be extended if the procedures for determining a person’s worthiness for purchasing a gun (or flying on a plane) are not made clear to the people affected (which is potentially any or all of us)?

It is well known that there are and have been many errors on the No-Fly List. Various film and music artists, prominent journalists and even members of Congress have at times erroneously been included in the No-Fly List. The No-Fly List is estimated at around 16,000 names with approximately 420,000 names expected in the Terrorist Screening Database. And most of the names are of foreign nationals. No big surprise there, but any number of American citizens that happen to share a name with a terrorist and find themselves denied boarding onto a plane or potentially from purchasing a firearm when there is no clear process for having the error corrected is too many as it violates the Constitution (see #1 above).

In America people cannot be denied rights over a suspicion. Instead there must be evidence together with a probable cause to restrict those rights. This typically means a jury or at least a judge has been involved in issuing a warrant or other court action that has a distinct appeals process.

The Democrats and anti-gunners would have us believe that closing this supposed No-Fly List loophole, much like the “gun show loophole” and the “buy-guns-over-the-internet loophole”, would prevent terrorists and criminals from being able to acquire weapons. This statement is a fallacious red herring! A terrorist or criminal does not and will not go through traditional channels to obtain their means for wreaking havoc. They will turn to various contacts to procure those weapons, or they might simply bring them in themselves by walking them across our porous national borders.

As was mentioned already, the San Bernandino terrorists acquired some of their weapons from an associate, who is also in hot water right now because of this and also because he allegedly participated in plans to attack American citizens more than five years ago in a separate attempt. How did the terrorists in a strictly gun-controlled country like France get a hold of their various bombs, grenades, and fully-automatic firearms in the Paris attacks? Some of that remains to be determined, but the fact remains, no amount of White House executive orders or federal laws will guarantee people that wish to do us harm will be unable to do so.

Which is precisely why our position is that we must all be responsible and well-prepared citizens. Would a well-trained and armed citizen in San Bernandino have been able to stop or slow down that attack? Could the same have been said of a skilled and armed Parisian in stopping or at least slowing those attacks?

Will we have more attacks?

Yes, yes we will.

Please be prepared. Please train diligently. Please be ready and able to step up if the situation warrants it.