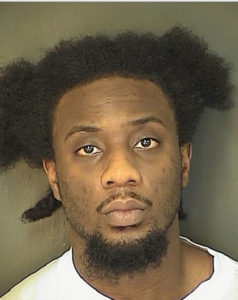 Elijah White, one of two invaders who attempted to rob a South Carolina Home.

Berkeley County, South Carolina Police are reporting on a fatal shooting which occurred last week in the small town of Moncks Corner, 32 miles north of Charleston. Police say that what occurred was a justifiable homicide after a man was forced to protect his family from a home invasion.

Berkeley County Police Chief Rick Ollic told reporters that their investigation revealed a man the Berkeley County Coroner identified as Elijah A. White, Jr., 30, forced his way into a home while armed with a handgun and wearing a mask and gloves. Ollic also added,

“We also retrieved from him rope, which I believe he was going to tie up the victims if he got into the residence, so there was no doubt he was there to do some serious harm to this family”

As police reached the scene, they also arrested a woman they say went to the door posing as a representative of a homeowner's association and was wearing a fake badge that read, “HOA.” The story was beginning to unfold.

The woman that has been proven to be an accomplice of White is Juanita Marie English. She is charged with first-degree burglary and criminal conspiracy, Ollic said. She was in bond court Wednesday night where she received a $125,000 bond.

Ollic was also present during the bond court hearing and told the judge that he believes English is a “threat to society.”

“[The victims] are absolutely traumatized,” Ollic told the judge. “The female victim, it's unbelievable what she went through last night.”

After speaking to English and the victims, a timeline of events was released. English was speaking to the female resident of the house about the neighborhood while posing as the HOA member, and when the door was open, at some point signaled to White, who ran to the door and forced his way in.

The victim told police he was holding a handgun with a laser pointer.

As she tried to close the door, White kicked in the door, breaking the door frame and knocking the locking device off and forced his way inside, Ollic said.

According to court records, the victim's husband then came downstairs armed with a gun and shot White who was found dead in the front yard.

“The homeowner at that location, protecting his family, returned fire at the subject, and killed him as a result of the incident”

Berkeley County Coroner Bill Salisbury said an autopsy on White is still underway, but confirmed he was struck four times.

“In Berkeley County, if you kick someone's door in and you get shot, as long as I'm the coroner, that's going to be a justifiable homicide,” Salisbury said.