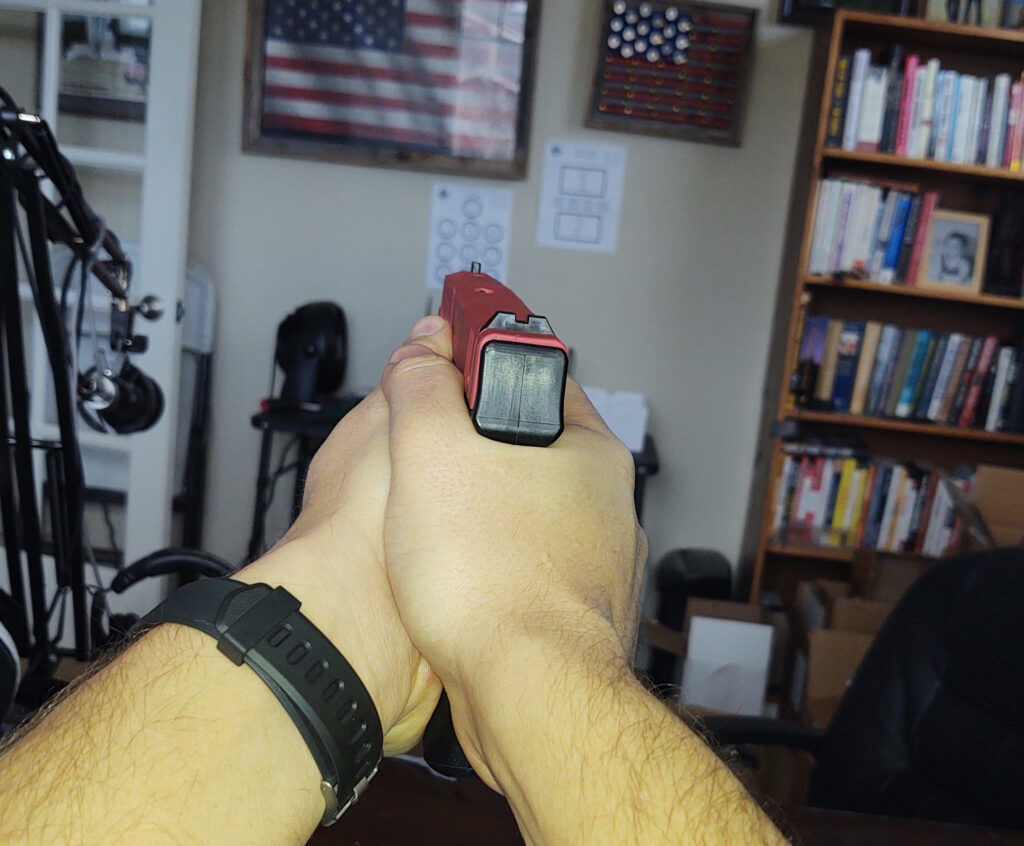 I've been familiar with Mantis since they had their “popup” booth at SHOT Show in 2016. We've been resellers of the product here on our site since 2017.

About a year ago I started seeing people on Facebook posting images of Mantis Patches earned by completing no-cost courses within the Mantis mobile app. It sounded interesting, but not enough to change my behavior. After all, I figured I have used Mantis enough to know what I didn't know and fixing my shooting deficiencies is a matter of just putting in the effort.

In other words, I thought Mantis didn't have anything more to teach me. I was wrong.

The Mantis device (there are a few models but all work the same way) is attached to a firearm and connects via Bluetooth to a free app you download to your mobile device. The Mantis measures the very micro-movements of the firearm in the microseconds immediately proceeding and during the trigger press of the gun.

The app then analyzes that data and provides the shooter with meaningful information helpful to diagnose common grip and trigger deficiencies.

The Mantis can be used in live fire or dry. For the sake of completing the courses, I ran everything on a SIRT 110 Pistol.

Other Resources for those who want to learn more:

Podcast Interview with Ratigan from Mantis

Putting Mantis to the Test as Instructors

How These Courses Work

Within the Mantis App, there are a number of drills that the user can run as part of their experience and training with the device. Also in the app but below those drills are “Courses.” As of this writing, there are 4 courses. The first is an introductory course meant to teach the user how to use the device and the app.

That introduction course is followed by 3 other courses: Basic Marksmanship, Advanced Marksmanship, and Elite Marksmanship. These courses consist of various tasks that have to be completed in order. These tasks consist of running various drills in the app. 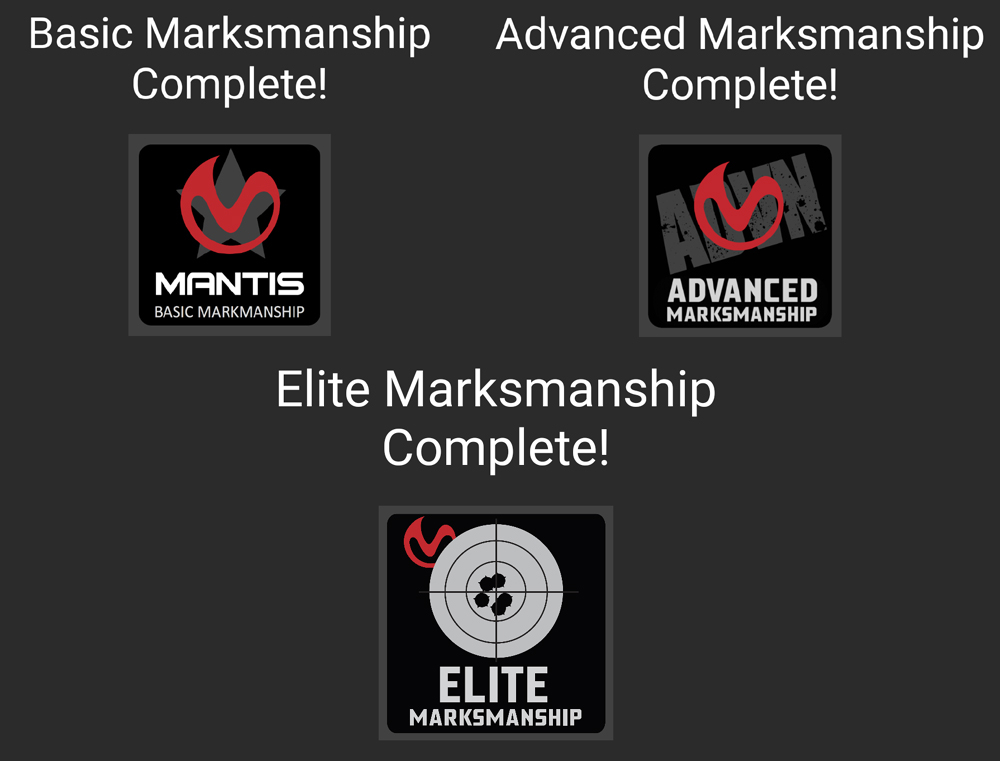 For example, one task might be completing the Benchmark drill with an average score of 90% or higher. Some tasks require a certain number of “shots” fired each day for several days in a row.

When you complete any given course you can input a name and address and have a corresponding PVC Velcro patch shipped to you as a “trophy” of sorts.

I very aggressively tackled these courses and completed all 3 in about 9 days. On day 8 my trigger finger hurt from firing over 600 shots with my SIRT pistol. In total, I had to fire 1383 “shots” to finish these courses. You may have to fire significantly less, or more. Your experience may vary!

What I Learned From The Experience

I think the point of Mantis is that you get to learn what you need to learn. These are the lessons I picked up to improve MY shooting.

When I go to the range and spend 4 hours shooting 500 rounds my hands are not sore. My muscles don't hurt. When I have to get an average score of 95% or higher on a Mantis drill it requires gripping harder than I am accustomed to doing.

To be clear, gripping harder helps me mask other deficiencies. I realize it isn't the only way to shoot better but it sure does help.

So working on my grip muscles and just generally gripping harder is something I picked up from this experience.

The Mantis app looks at the movement of the gun in those critical microseconds and makes some assumptions of what you may have done wrong based on historical data from the majority of shooters.

The Mantis can't feel your hands on the gun. It has no idea where your finger is placed on the trigger. It cannot see the target and doesn't know what your point of impact is.

As such, while the suggestions from the app on what you are doing wrong are probably helpful they are not always accurate.

Also, I find that the better the shot (measured on a scale of 0 to 100 in the Mantis system) the less likely the advice is accurate and helpful. When you get to a point when you consistently score an average over 90% and your worst shots are 85% you have to work harder to figure out what you are doing wrong.

The other analytical tools in the app help to accomplish this. Looking at the movement graph and other information over time at scale will help you figure out what you are doing.

A lot of my dry fire practice is conducted with either a SIRT or LaserDot Ammo Insert. As such, I generally get a red dot point of impact. I like having that visual feedback relating to accuracy. However, it does tend to train my eye to focus on the target and the point of impact instead of seeing my front sight and how my sight picture moves as I shoot.

That is a deficiency I didn't really know about until this experience. 1383 shots fired later I had a lot of time to practice seeing my front sight and noticing how the gun was moving during the trigger press.

After a while, I got to the point where I could predict within 5% what my shot score was from Mantis without looking at the app. I also knew the direction of movement and could accurately predict the point of impact without seeing the laser.

I consider this skill of focusing on the front sight and SEEING the sight picture while shooting to be a critical skill. I've heard very advanced shooters talk about it for years but I've never understood how I could work on acquiring that skill or what it would be like to be able to do so.

Now, all my 1383 shots fired in this experience were dry fire and I'm sure it will be more difficult in live-fire with recoil and shooting at a faster cadence but I'm one, very important, step closer to understanding and acquiring this critical ability.

I believe that all humans struggle to some degree with anticipating recoil. I do. If you disturb your gun even to the slightest degree your score on the Mantis app is going to drop below a level that is required to complete these courses. As such you have to figure out your best finger placement and trigger press.

I was using a stock SIRT which has a pretty stiff trigger. I use it for a lot of my dry fire and I know it's about double the actual pounds required for any of my carry guns but it even forces me to a greater degree to dial this in.

The first thing I figured out is finger placement had little to no effect for me on my Mantis score. Just getting my finger on there enough to be able to press it straight to the rear is all that mattered. I had a large range of “amount of finger” I could use without changing my outcome at all.

Second, I found that I performed best when I quickly prepped the trigger to the wall and then pressed smoothly through the wall. I learned from Jeff Gonzalez (via Riley Bowman) a year or 2 ago that the trigger does not have 2 stages like many of us think. There isn't slack and a wall. There are 3 stages. The slack, the wall, and the break.

Learning to remove slack immediately but smoothly work through the wall until the break makes a huge difference for me.

I've known this for a while but 1383 shots into these Mantis courses allowed me to both practice it to an extreme and verify the significant difference it makes.

Third, an interesting failure that the Mantis has is a tendency to pick up the trigger reset on my SIRT as a new trigger press. If I trap the trigger to the rear and slowly reset the trigger there is a 30 or so percent chance that Mantis is going to detect that reset as another shot.

This forced me to break a bad habit.

For years I've had the bad habit of basically slowing down my trigger press when I need to make more precise shots and as part of that “slow down” I tend to trap the trigger and slowly reset it. Resetting slowly does NOTHING for my accuracy.

Now, with the Mantis forcing me to reset quickly in order to avoid a false positive I got 1383 chances to practice a quick trigger reset. Very valuable for my shooting.

In 1383 shots fired I learned that you have to nail down a consistent grip. Just the slightest, and I mean EXTREMELY minute (my NOOT), changes to the grip make a big difference in Mantis shot score. This means making slight tweaks and then figuring out how to really nail that perfect grip every single time.

This would be even more critical in live-fire where recoil causes the grip to become dislodged or changed, or a bad grip just prevents one from consistently bringing the gun back to target quickly.

I think the very nature of going through these Mantis courses provides enough repetition to really refine one's grip and the ability to acquire it the same way every time.

You can learn more about the Mantis, here.