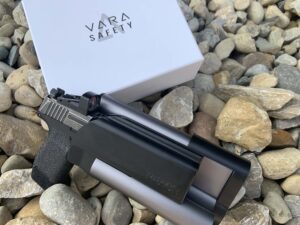 It's only been around a year since I met some of the great people from Vara Safety while cruising around SHOT Show. I was sent one of their original Reach safes for evaluation, and did a write-up explaining the pros and cons of this holster/safe hybrid.

In a nutshell, the original Reach is a gun-specific holster that is mounted somewhere in your home. Maybe it's a table, the side of the bed, or a closet shelf. The handgun is securely locked in the device with the grip exposed.

The unique thing about the design of the device is that to access the gun, you grip the pistol grip just as if you were drawing it from a typical holster. The exception is that a fingerprint reader is positioned so that the thumb of the shooting hand comes into contact with it during the draw/unlocking process.

This makes accessing the firearm quicker than a traditional vault-type safe where one would have to reach into the safe after unlocking it. 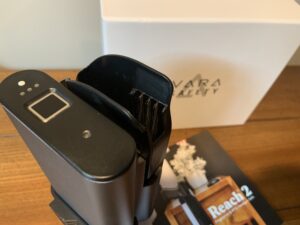 The Reach 2 takes the basic design of the original device and improved upon it. The technology in the first Reach Safe was already pretty darn good but anything can be improved upon. Both units are designed to be plugged into an outlet for primary power, with a backup battery.

The original had a solid 8-10 hours of backup battery life. However, Reach 2's battery life is now 5 to 6 months!

Not only can Reach 2 keep going without power for longer, but there is also now a battery indicator that can show how much battery life is left.

The original device intrigued a lot of people, and I found it a nice option for my Glock 19 which is my everyday carry handgun. Even with it requiring power, and using biometrics to unlock, I felt that the technology inside made it a viable quick-access solution for a home defense gun.

Because Reach and Reach 2 devices work with a variety of guns, I thought I would test out the new version using my Sig Sauer P365 handgun.

Even with many favorable reviews, some are still extremely leery about trusting electronics to work when they need immediate access to their firearm. I get it. However, leaving a loaded gun in the dresser drawer, on the nightstand, or under your pillow at night is just not a great practice, especially if you have children or teens in the home.

To some degree, nearly every quick-access safe uses electricity to provide access, and Reach and Reach 2 are no different. So is a fingerprint reader less reliable than the electronics in the keypad that unlocks the safe? That is not an easy question to answer without a huge sample size covering a wide variety of safes. 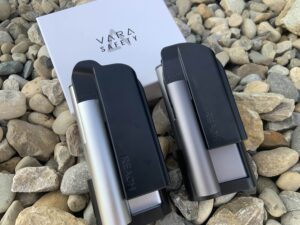 The original Reach and Reach 2 look almost identical on the outside. The internals got a makeover though.

Vara Safety focused on these concerns and put even more engineering into the electronics. The fingerprint reader on the original Reach was surprisingly fast and reliable. It was consistently reading my thumbprint and unlocking the safe in under a second.

Maybe even more importantly, the reader reliably recognized my fingerprint the first time without having to reposition it. Reach 2's fingerprint reader is even ‘smarter' and absolutely reads and unlocks the device even faster.

It's around a half-second or less every time, and not once has the device not recognized my thumbprint.

I had some people ask about the ability of the reader to read a thumbprint if the finger was dirty or sweaty. In my test, I covered my finger in chalk so we could see exactly how much material was in between my finger and the reader.

You can watch me test this out, as well as with water, in the below video:

It read my finger flawlessly every time.

Water is a bit trickier. It's tough to say how wet someone's finger would be at a given time. So I tried what I felt might be someone's hands if they were sweaty (and I know it's typically the palms that get sweaty, not your thumb).

Again, it read the print each time. I wet my thumb as if I had washed my hands, but hadn't yet dried them. The fingerprint reader could not read it until I passed it across my shirt. So from what I can conclude, dirt doesn't seem to be an issue, and water is only an issue if your hand is actually wet, not sweaty. 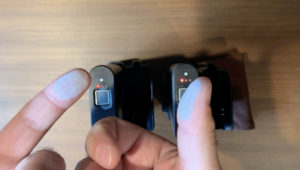 I used colored chalk to test the fingerprint reader's ability to reliably function with dirty fingers. Spoiler Alert: It functioned without a problem.

While we are talking about Reach 2's upgraded technology, it's appropriate to mention it now has passive RFID capabilities with security encryption.

The RFID kit comes with a wristband, a keyfob, and two stickers. All of these can unlock the device when they are in close proximity to the unit. And because they are passive, they do not require a battery to function.

The wristband is non-adjustable and made of a silicone material. The keyfob is small and unobtrusive. The stickers could be stuck to the underside of an item that sits on a desk next to the safe, or perhaps on the back of your ID card in your wallet.

The RFID kit gives the user the option to set up their access in a way that works for their application.

Adding RFID to the fingerprint reading technology provides redundancy in access, which should give peace of mind to some skeptics of biometric technology. And if you're wondering, yes there is also a key override that can unlock the unit if the electrical components fail. 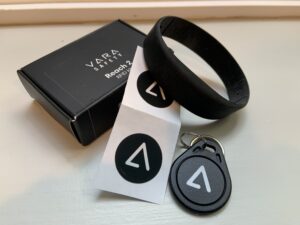 Reach 2 adds RFID technology. The RFID kit from the company includes 2 stickers, a key fob, and a wristband. RFID gives redundancy in access to the gun.

One of the things that I thought could be improved upon with the original Reach was the bright, flashing LED lights and loud audible beeps. The LED light stayed on and was bright, so mounting it bedside required some electrical tape to cover them.

Again Vara Safety listened, and now the lights are not quite as bright, only come on when the safe is actually doing something, and the beeps are not as loud.

The setup process was also much more straight forward and intuitive. When setting up the fingerprint for the first time, the process is similar to other biometric readers people are familiar with. You place the finger on the pad, the reader reads it, then the finger is placed down again for a second read. This is done three times and you're good to go.

It also may be worth mentioning that I am evaluating this with my P365 that is equipped with a red dot optic. You should not have an issue with your gun fitting the holster shell, but it won't work if you have a tac light on your firearm. Additionally, the shells have a pretty generous channel for iron sights.

So if you have a factory, or slightly taller sights, you should be fine. My F8 sights from XS Sights are pretty oversized due to the red dot. They fit, but if they were any taller they may drag just a bit on the inside of the shell. Probably not an issue for 90% of you reading this, but if you have super tall sights, you may have to do some mods to the shell to get it to work. 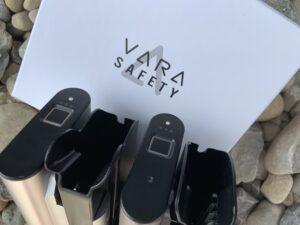 The original Reach (left) and new Reach 2 (right) use the same accessories. Your gun-specific holster molds and different mounting devices will work on both. Externally, the only difference is the color and the addition of the RFID scanner (which is the small circle below the fingerprint reader).

All in all, kudos to Vara Safety. They came through again with a great product that a lot of gun owners will like. What is impressive is not just that Vara Safety improved upon a product that was terrific, but that in less than a year, they listened to the customers and reviewers' feedback and tweaked their design to be even better.

I feel a lot more comfortable with purchasing a product when I see a company so responsive to the customer and focused on producing a product that meets what the consumer wants.

At this point, the technology in Reach 2 is so fast and reliable that using it as a safe for your everyday carry handguns is a no-brainer. And I think most skeptics of biometric safes will be surprised and have confidence using it as quick access safe for home defense.