Join Our Newsletter
Shop Our Store
MAIN MENUMAIN MENU
By Eve Flanigan on November 8, 2018 in Gear 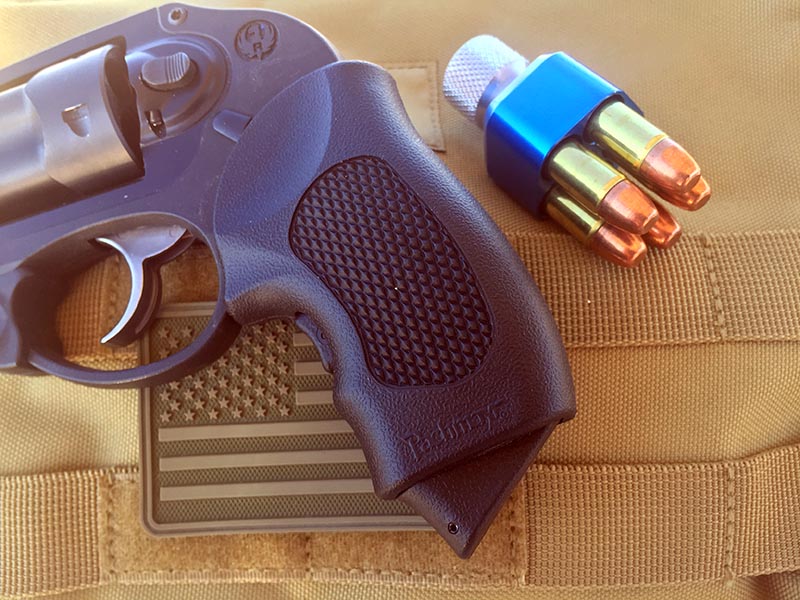 Pachmayr offers two gadgets that are sure to solve concealment problems for some revolver carriers.

Revolvers are a popular choice for concealed carry, but a compact one like the Ruger LCR .38 Special used in this test, has a couple limitations. Most notable is ammunition capacity—just five rounds. Another limitation, at least with the lightweight models, is comfort and control.

There’s a lot of power coming out of that short barrel, and maintaining a secure grip can be challenging when firing multiple rounds.

There’s a company offering solutions to these challenges: Pachmayr, a long-standing tactical goods provider and a division of the Lyman company of Connecticut. I’ve recently acquired their scaled-down Competition Aluminum Speedloader and Guardian Grip, to see if they tame the experience of carrying and firing my LCR. 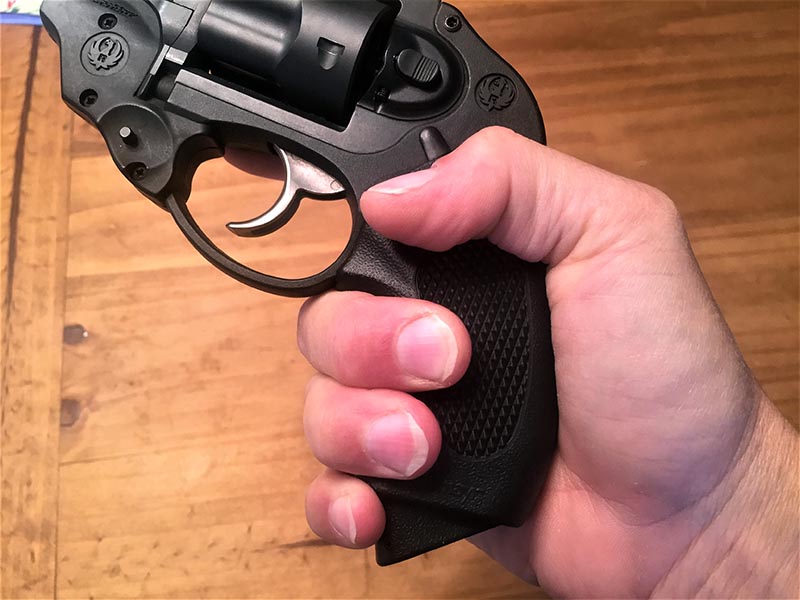 That little pinky wedge pops out as a result of gripping the revolver.

Speedloaders that carry extra rounds in the pattern of a cylinder, for quick reloads, are nothing new. I’ve owned an HKS-brand speedloader for some time. While it works, I confess I’ve never carried it in a readily accessible place when concealing a revolver. It’s rather chunky and heavy, and presents its own challenge to conceal.

This new-fangled Pachmayr makes some major improvements upon traditional speedloader design. Aluminum construction makes it less subject to breakage. Instead of the familiar cylindrical shape where the cartridges are secured, it’s a pentagon. It’s 1.25 inches wide at the largest point. Although that’s the same as the diameter of the round HKS, it’s altogether more compact thanks to its flat sides. 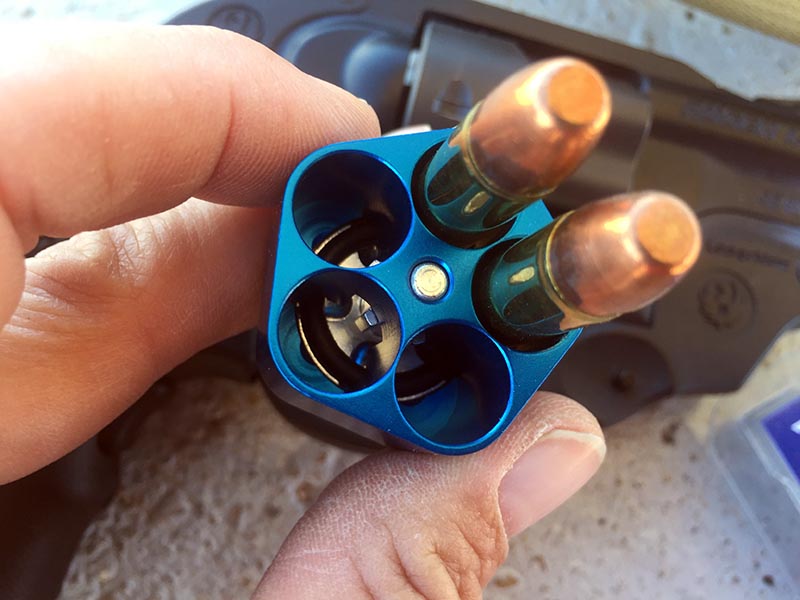 A rubber gasket inside the speedloader keeps cartridges from wobbling.

The Pachmayr Competition Aluminum Speedloader is 1.75 inches top to bottom, unloaded. By comparison, the HKS speedloader for this firearm is the same in diameter and 1.40 inches tall, unloaded.

The Pachymayr has a bit of weight to it, two ounces, with the feel of about $2.25 in quarters. The HKS is light enough to feel more like two quarter coins in hand. The Pachmayr loader is, after all, a competition accessory that can still be used for concealed carry. 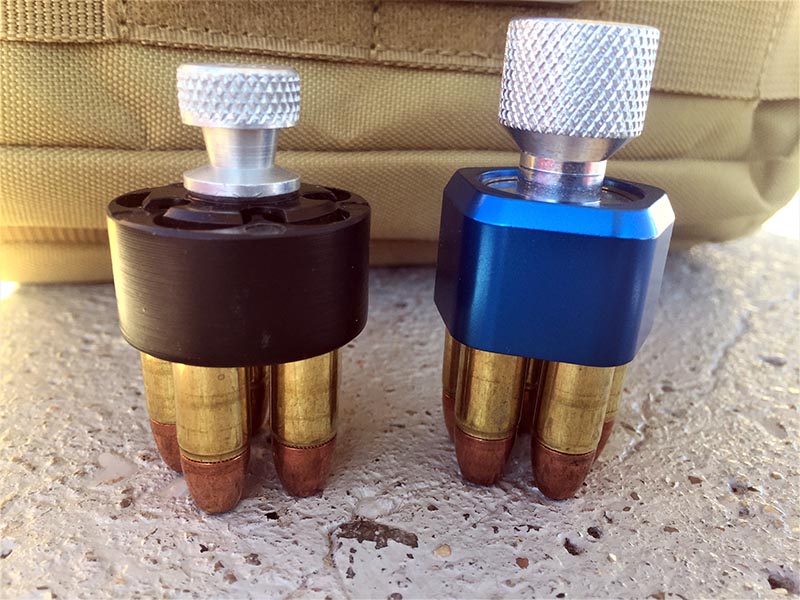 A comparative look at the HKS parens left parens loader and the Pachmayr. Flat sides can make a difference in concealability.

One feature of this new speedloader that serves both the concealed carry and competition shooter is the gross motor-friendly release knob. The knurled knob is twice the height and almost half an inch greater in width than the HKS. It’s easy to grab and operate. Just like the HKS and similar speedloaders, a quick one-eighth turn of the knob releases rounds into the cylinder.

This speedloader is also unique and more secure-feeling than the polymer model because of a rubber gasket that lines the base of the device. Cartridges lock in and ride with a more secure feel as compared to the HKS.

Unlike some other brands, including the HKS, it releases rounds when the knob is turned counter clockwise. “Lefty loosey” is a mnemonic that lives in many English-speaking brains, and this one offers no argument with that ingrained habit.

Like any reloading process, it requires some practice to get used to. I’ve seen other reviewers kvetch about the fat knob not allowing room for fingers. 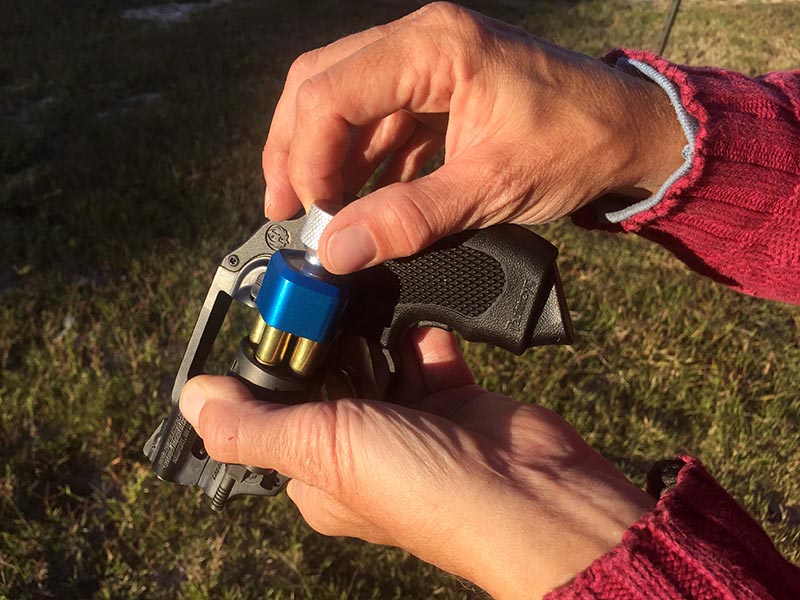 For this reason I tried both the HKS and Pachmayr loaders in the same training session. In my opinion, it’s a matter of where one puts their thumb and forefinger at the beginning of the cartridge-release motion.

Get used to putting them in a consistent place, and one is as fast as the other, with the Pachmayr having the added benefit of no confidence-damaging wiggle of the cartridges inside the loader.

For carrying concealed, the Pachmayr Aluminum Competition speedloader is something for revolver carriers to consider. Despite having the same measurements and slightly more weight than previous designs, it’s significantly more concealable.

Its made-for-speed release knob also serves the interest of anyone who carries a revolver to defend life and limb. There are three sizes to fit most popular J-, K-, and L-frames. Retail is $19.98 by direct order from Lyman, with other retailers having different prices.

Another Pachmayr accessory, made for concealment-size revolvers, is the Guardian Grip. Many shooters of small guns, especially those with large hands, feel uneasy with a handgun on which the grip is so short that the shooter’s pinky finger dangles.

With a spring-loaded pushbutton, the Guardian extends a pinky-width wedge downward from the grip, providing the shooter some purchase for that smallest finger.

Closing the finger around the button on the front of the grip makes the wedge pop out.

The package instructions say installation requires a screwdriver, a punch, and a small hammer. I timed my own installation—three minutes, and only a slotted screwdriver was used. Because the single screw that secures the grip to the frame bears considerable force, a drop of Loctite is a good idea during the install.

In the case of my LCR, this grip is slightly thinner, and definitely slicker in texture, than the rubberized stock grip. I’m guessing the fat-fingered shooters might prefer this one. I don’t feel a lot of difference shooting it, but it does come out of concealment easier without the rubbery texture. 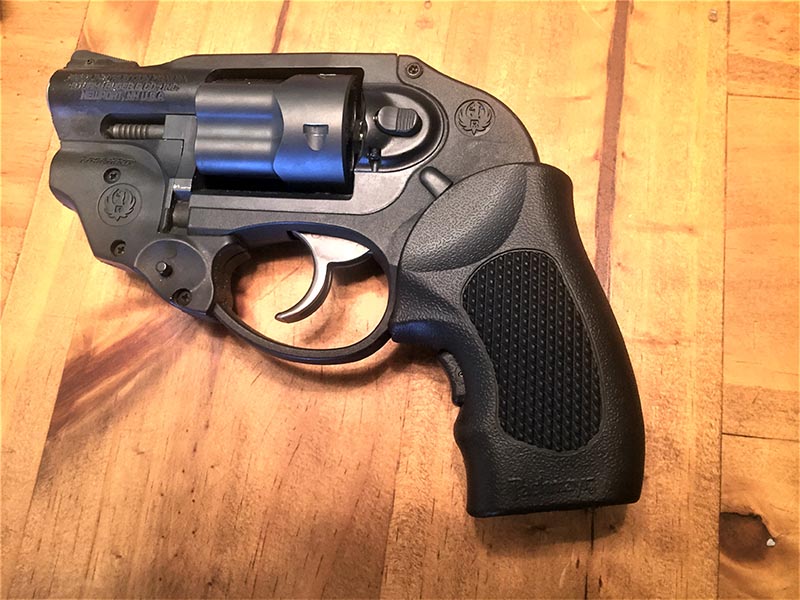 I was hoping my support hand index finger would feel a little less chewed on by the bottom of the trigger guard, but after about ten rounds that familiar pain I associate with pocket-size, centerfire revolvers was back. I have a few students who have installed this grip and love the pinky extension. It is a real problem-solver for people bothered by a too-short grip handle. 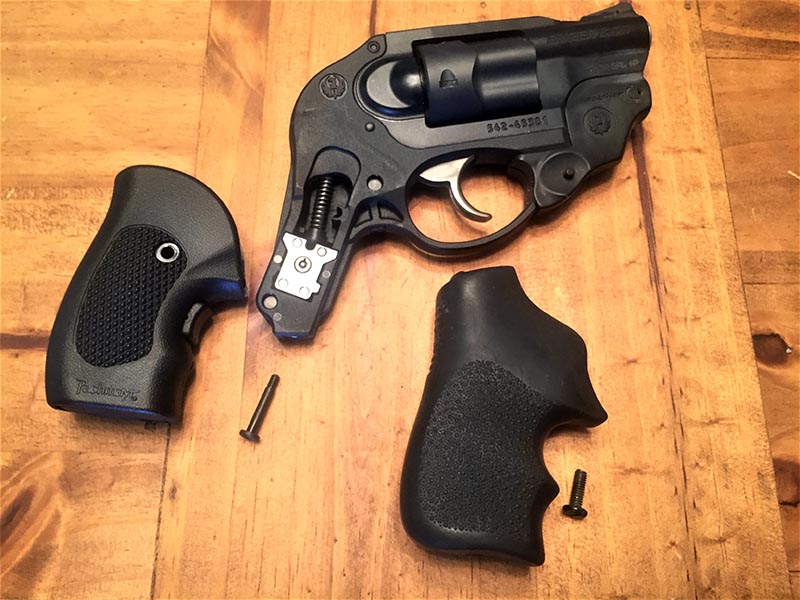 Installing the Guardian grip after removing the stock grip was a breeze.

The Guardian Grip comes in two sizes to fit the Ruger LCR/LCR-X series or the Smith & Wesson J frames.

Both the Competition Aluminum Speedloader and Guardian Grip are available directly from the Pachmayr site for $19.98 and $49.98, respectively, and less expensive at other retailers. I feel the speedloader is a great value for those who want to carry more than their wheelgun’s limited capacity. Since I’m not a revolver match shooter, I’ll refrain from uninformed commentary on that front.

As for the Guardian Grip, it can offer a quicker, cleaner draw from concealment than a rubberized grip, but I’d only buy it if I were one of those big-handed shooters who’s distracted by a dangling little finger. Do you carry a revolver for your EDC?