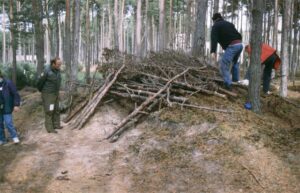 With everything happening in the world, I thought it would be prudent to go over a few extracurricular skills and things to think about for the future. We all know about guns and ammo and why having them can be beneficial.

There are two main benefits for owning both, defense and food. I think we all have a solid understanding of this so I won't spend much more time on it, not right now, anyway.

Before I move on, let me tell you why I'm writing this article and why I think it's important for you to take these things seriously. First, while I'm an optimist, I also am a realist who tends to be a deep thinker. Because of this I hope and believe that things will continually get better but understand that they're likely going to take a long time to get there.

I'm not talking about the virus. I'm to the point where I don't pay much attention to the virus anymore. The virus is here to stay and there isn't much the average citizen can do about it. Yes I still take the necessary precautions and make an attempt to not get sick, but that's not the point.

What I am talking about, is the rest of the mess — the economic impact of the shutdowns that the virus has caused is going to be mind blowing and making sure you can feed your family in the future needs to happen now.

It's looking less and less like we're going to get that “V” shaped recovery and more and more like the great depression.

I'm compelled to write this article because when I talk to my family, friends, and neighbors, none of them seem to think we're as bad off as we are. Now that I've gotten the reason why I'm writing this article out of the way, let's go through some proof to back up my claims.

And, also keep in mind that these aren't actually my claims but information I'm presenting to you based on other people's opinions. At the end of the day, I'm not that smart when it comes to economics.

The US Economy Is Shot —

The unemployment rate in the US is reportedly at 12% but there is something false about that number. It doesn't count everyone, like the contractors, who are out of work. The real number is actually 21% and rising. And, this doesn't also include the people who are still employed but have taken a pay cut or cut in hours worked.

Whatever the real numbers are, they're high (worse in some areas than others), which brings us to the next point, which is that small businesses are closing at alarming rates.

According to Market Watch, of all the biz closures that have taken place since March 1, 2020 (due to Covid), 55% of them will not be reopening. What this means, is that the above-mentioned 21% of people currently out of work will not have a job to go back to at any point in the near future.

I mean, some of them will, but many of them will not. Of course, this doesn't include the airliners having to lay people off, the car companies starting to struggle because people aren't buying new cars right now, etc.

There are other things I can mention and go into detail on to help drive my point home even further. For example, some economists believe there is a housing bubble that's about to burst, the massive printing of money that's putting us trillions of dollars further into debt, and so much more.

I encourage you to research those things along with the current rise in food prices (being as high as a 4.2% increase) because companies can't keep up with online demand and people are afraid to go to the store.

We'll leave the proof that we may be screwed there, and move on to what you can do about it right now.

I hate all this doom and gloom stuff. Being an optimist it really goes against my grain. However, I feel this is important stuff. Let's go over some things you need to take care of right now:

We've already gone over this. I want to drive home the fact that if you have stuff that other people want, whether food or otherwise, people may attempt to take it away from you by force. Being able to protect your family is of utmost importance.

Also important, and really the point here, is that you should identify some animals in your area that you can hunt. If you have never hunted before, I also urge you to do some research in the proper way to process an animal after you take it so you don't damage and waste anything.

In my area, I've identified several breeds of bird, squirrel, rabbit, deer, black bear, and a few other, less appetizing animals, that we'd eat if need be.

And I've got guns and ammo for each.

It's imperative that you're buying shelf-stable food as often as possible whenever you can afford it. We tend to add a few cans to each grocery order just so we can continually stock up on things just in case we ever get to a point where we can't find food in the store.

We only tend to stock things that we eat, so we don't buy anything crazy, and things get rotated. So, we're not wasting money on things we don't eat, but always have things around to eat if the stinky brown stuff hits the large reciprocating device in the sky.

We've also noticed that, at least in our area, canned goods were starting to get scarce but fresh foods, and the farmer's market, were booming and still readily available. What this meant for us, is that we learned how to can our own food.

So far over the past couple of weeks my wife has canned two bushels of peaches, made 24 jars of pickles, and 36 jars of tomato sauce. The only problem we're having now is that we need to drive further for the jars because we keep selling them out.

It's also a good idea to have some water on hand. Your body needs water to survive, and you can't make coffee without water. There are a few ways of doing this. Some people store bottles, others store rain. Even others will install a manual pump well on their property just so they have water flow.

People always look at me like I'm nuts for this one but I don't really care. While all of my neighbors are out throwing grass seed and fertilizer to make their lawn nice and healthy, I'm outside looking for and identifying different things I can feed my family that are found in my yard and teaching them to do the same.

In fact, all three of my young children can identify 3 different plants that are wild edibles that are almost certainly healthier than you can get in the local grocery store.

I'm not going to tell you what to look for because I don't want to be held responsible if you don't ID something right and get sick. But, I will tell you that you should start to find things in your yard that you can eat to get nutrients should the economy not make that V-shaped recovery everyone is hoping for.

I've Identified seven things just in my front yard that I can go out and eat, and even more out in the back. And just a short walk down the street will yield a nut-bearing tree that drops in the fall.

So I'm running out of room here, but there are some other things to consider that I just want to mention briefly as a “just in case” or “what if.”

Get rid of as much debt as possible. This will be a hard thing to do short term, and I'm thinking we're closer to a financial meltdown of 1930s proportions than many people want to admit. I hope I'm wrong, I really do, but there are apparently so many similarities that the possibility cannot be ignored.

Consider what you can barter with for things you need. What things do you have around your house that you can use to barter with later on down the road? Some financial experts are saying there will be a reset of sorts for the US Dollar. I have no idea what that looks like, but if your cash is worthless, you may need to figure out something else.

Medical is extremely important, as well. I'm fortunate to be married to a registered nurse who is quite capable of stitching us back up if necessary, but also having proper medical gear to get you out of a jam is an absolute necessity. I'd urge you to check out Mountain Man Medical run by my Navy Corpsman friend Brian.

They also have an excellent course on trauma medicine, which is hugely beneficial and highly acclaimed.

Identify like-minded people for a support system. These are ideally people you can rely on when the fan is actually hit. I never had this when I lived in Pennsylvania, but I'm happy to say that I've got friends where I live now who would hand me the shirt off their back if I needed it.

I'd also do the same for them. We build each other up and make sure we're all taken care of.

Finally, Jacob and Riley are into Ham radios and such. While I don't know much about that sort of thing just yet, I can say that it is something that I'm interested in learning and see a benefit to being able to communicate with people.

I do want to say that I have no idea what the future holds. I don't have a crystal ball and cannot predict things. I know what I'm doing to make sure I can feed my kids and all I can do is strongly suggest that you're doing similar things if you're capable.

And I say it like that because I know that not everyone can prepare for what may be coming because of financial problems. That said, the free things, like collecting rain water or identifying wild edibles can't hurt anything.

Episode 433: Good and Bad News for the Second Amendment
Chicago, Austin, and the NFAC

3 Responses to Thoughts on Survival and Preparedness For The Future