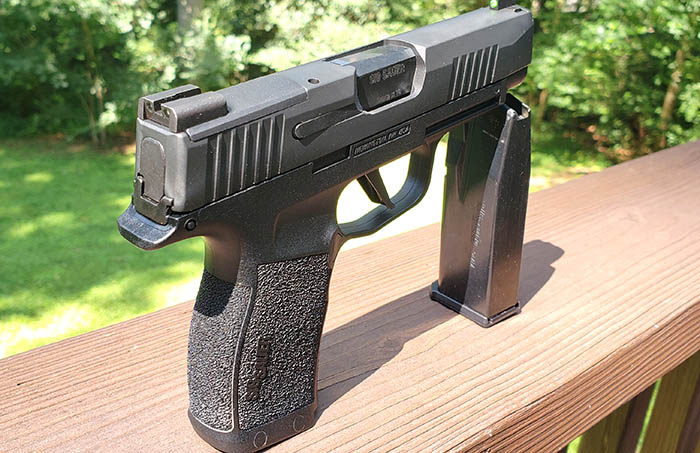 The SIG Sauer P365 has been an absolute game-changer in the world of concealed carry. Never before has a gun hit the market running as hard as this one has, and it's easy to see why. The P365 is a big gun in a tiny package.

It had instant support from just about every gun holster manufacturer out there, and it only seems to get better. There have been a few other releases since the inception of the original gun. These include a Coyote tan model, one with a safety, the SAS model, and, of course, the XL.

I own the XL model and have shot the original P365 a bunch of different times. Both guns are great, but I have to say that the XL is the better choice for my meaty hands. You can check out Riley's SHOP Talk, where he compares the two:

The SIG P365 XL has features not found on the original model:

At the bottom of the magazine well, it swells out just a bit to help aid you in those quick reloads.

The XL is slightly larger, with a half-inch longer barrel, compared to the original P365. The added length doesn't hurt concealability at all. However, it does help in accuracy a bit with an increased sight radius. But maybe even more importantly, it seems to balance the gun out a little more.

Additionally, those with large hands who use a “thumbs forward” grip may find the thumb on the support hand gets pretty close to the muzzle on the standard P365. The XL gives folks with big hands like me a little extra space.

Bigger capacity from the factory

One thing I don't like is how the optic cut includes the rear iron sights. As you see in the photo, you cannot leave your rear sights on the gun. In other words, you get the optic, or you get your iron sights. You can't have both.

Removing the rear iron sights when using an optic isn't an oversight. Sig wants you to use their Romeo Zero red dot. The optic comes with an integrated rear sight. So in a sense, if you set the gun up the way Sig wants, you have both.

Not having rear iron sights won't bother some people. And to be honest, it isn't necessarily a deal-breaker for me. However, I've spoken to others who want to use a different optic. And just because of this fact alone won't buy the XL.

As you see in the above photo, the rear sights sit on the optic plate.

The grip texturing on the P365 XL is fantastic and provides the right amount of grip for me.

And while we are talking about grip, it is an essential shooting fundamental. If you can't grip the gun consistently and manage recoil, you will struggle shooting fast. See how your self-defense pistol skills stack up against these standards.

One pretty cool thing is that you can swap the slides and grips if you own both models. In other words, if you want the 10-round grip with the longer slide and sight radius, you can have your cake and eat it, too.

I think the 365XL is a winner. Let us know your thoughts in the comments below.

If you happen to be on the fence, I suggest you read Riley's review on the original 365 here.

Would You Prefer I Lie? – A Rant About Gun Reviews
Episode 351: That EDC Life with Bryan Eastridge