Join Our Newsletter
Shop Our Store
MAIN MENUMAIN MENU
By Matthew Maruster on January 18, 2022 in Gear

Yesterday SHOT Show 2022 officially kicked off for us on the Concealed Carry team. I put together a recap of the highlights of day 1. 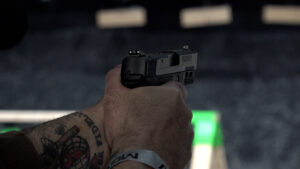 In years past, SHOT Show started on Sunday, with the team attending Sig Sauer's Range Day. Unfortunately, Sig didn't come to Las Vegas this year, so the event didn't happen. So instead, we started on Monday with Industry Day at the Range.

Industry Day at the Range takes place at a range about 30 minutes from the Vegas Strip. Around 200 different companies from the shooting industry attend the event. Well-known companies like Glock and Smith and Wesson have plenty of guns and ammunition to shoot. There are also many new companies on the range that provide their new products for testing. 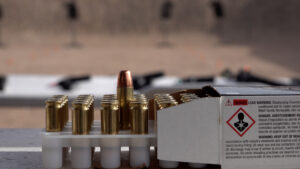 One of the highlights from Industry Day at the Range was the first opportunity to shoot Federal's new 30 Super Carry round. This new cartridge from Federal is designed explicitly with concealed carry in mind. In essence, it's a cartridge roughly the size of a .380 with the ballistics of 9mm. The benefit is more capacity without sacrificing performance.

You can read more about the 30 Super Carry here.

We had the opportunity to shoot the 30 Super Carry from Smith and Wesson's new CSX and Shield Plus and Nighthawk Custom's 1911. Some say it felt “snappy,” like a .380 round. My opinion is that it is very comparable to a 9mm. If I were blindfolded and shot the 30 Super Carry round and a 9mm out of similar guns, I may be able to tell you which one was which. However, if you didn't shoot one immediately after the other, it would be hard to know which one is which because they are so similar. 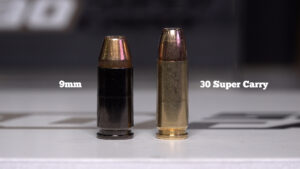 A rep from Smith and Wesson answered a question I had. I wanted to know what the company expects the round will cost. After all, it won't matter how well it performs if people can't afford to shoot it.

The rep told me to expect full metal jacket training rounds to run around the same as .380 is right now. This news was not surprising as I doubt the price can get anywhere close to 9mm.

The other interesting product was from a company called FoldAR. 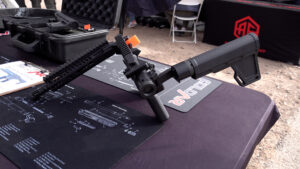 As you can imagine, the company makes an AR that folds. Law Tactical makes an adapter that allows the stock to fold. But the upper receiver on FoldAR's rifle also folds. So when folded, the rifle can easily fit in a small backpack. You can see how the rifle folds in this quick video. 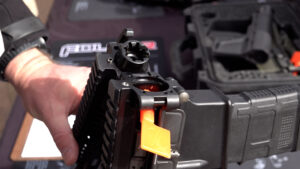 Okay, that's it for yesterday. We have a lot more exciting content we will be publishing over the next few days, but I have to get back to the show floor. Consider following our Facebook and Instagram social media pages because we post videos and photos as we find exciting things throughout the day.