Join Our Newsletter
Shop Our Store
MAIN MENUMAIN MENU
By Joshua Gillem on April 23, 2019 in Gear 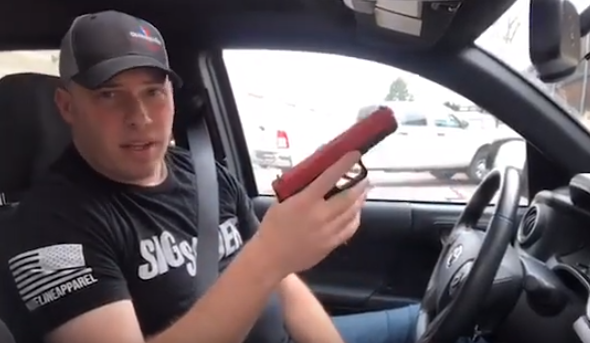 In this week's episode of SHOP Talk, our guys aren't actually in the shop. Instead, they're in Jacob's pickup truck, showing you some “how to” strategies.

How to do what, exactly? Well, defend your life with your gun in your vehicle.

The number of truth bombs being dropped in this video is ridiculous. In fact, something I wish more people would talk about, is off body carry in the vehicle.

Off body vehicle carry is something that they address in this episode of SHOP Talk.

I, personally, come from the frame of mind that your gun should only leave your body as a last resort. Never would I ever want to drive around with my gun off my body for a number of reasons.

One example, is what if you get into an accident while driving? What happens to your gun? Does it go flying in the chaos? Do you reach for it under stress? Does your finger accidentally hit the trigger?

Hey, it could happen.

Or, Jacob brings up a great point in the video when he talks about someone off body carrying, having to stop for a drink at the gas station, forgetting (or leaving on purpose because it'll be quick) the gun in the car.

Off body carry, for these and other reasons addressed in the video is a bad idea and I don't, personally, recommend it.

Also addressed in the video are many more aspects about carrying concealed in your car, how to draw, etc. You can watch the video, here:

Mentioned in the video is this week's special offer. Over a year ago, as referenced in the video, we put together a training course called Vehicle Firearms Tactics, what we like to call VFT.

In it we, and when I say we please understand that I had nothing to do with it, teach you how to fight in and around your vehicle. These guys utterly destroyed a car by shooting at it to show the viewers what happens when a car is shot from different angles.

It's a great course, and highly recommended. For the time being, when you use the code roadtrip2019 you can get the course for only $20. It usually costs $37.62, so it is ALMOST half off. It's well worth the price.

As a bonus, you also get the Legal Boundaries by State eBook for free, which is something we usually charge $10 for.

You can find the VFT course, here. If you want to learn more about the eBook we're including with the course, you can do so here.

We usually only run these sales for about one week, so you've got until the 28th of April to take advantage before it goes away. Don't delay.