Join Our Newsletter
Shop Our Store
MAIN MENUMAIN MENU
By Joshua Gillem on February 25, 2021 in Gear

I'll be perfectly honest with you, I don't do a lot of optic reviews. It's not because I don't want to do them, I just don't usually get the opportunity as much as I do other gear. So when I got the CMMG Banshee and the Diamondback DBX in for review and needed an optic, I thought there was no time like the present.

So far, I have had the Cyclops mounted on both of the above-mentioned pistols. It is currently sitting on the Banshee, because I'm still working on that review (and I now own the DBX and will be putting a different optic on it). 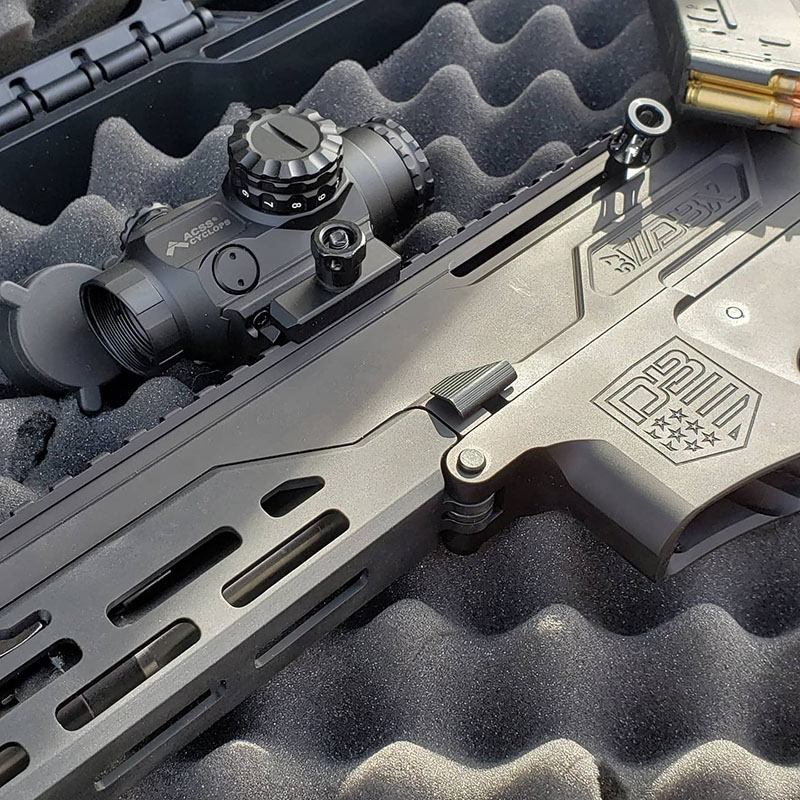 Here is the DBX with the Primary Arms Cyclops ACSS installed.

If I end up buying this Banshee, which is a total possibility at this point due to the status of things in our country, I'll be keeping this prism scope mounted atop. And if not, I have another AR pistol that is in need of a decent optic instead of my 50$ Amazon beater I use on my test rifles.

If you look closely you can see the illuminated reticle.

I'm pretty impressed by this thing. The glass is crystal clear, and it features a non-lit etched or lit red reticle with 11 different brightness settings.

It is powered by a CR2032 Lithium Coin battery and has thus far proven to have a long life, being that I got this in November and haven't changed the battery yet using it several different times across a few different platforms.

Just as long as you remember to turn the dial back to the “zero” setting after each use the battery should last you quite a while.

But even if you forget to turn it off and the battery drains, not all is lost because the reticle is etched into the glass. And because it is, it is always present even when the power goes out. It might not be the easiest to see depending on how bright it is, like if it's really dark out, but it is always there.

Zeroing was easy, and I walked it in because I didn't have the correct bore sight. Both elevation and windage adjustment knobs equal 1/2 MOA. A tool is needed to turn the dial, but in a pinch I had used the bottom side (rim) of a spent cartridge for adjusting purposes, which worked fine albeit a little slower.

The turrets have caps on them that screw off but remain attached to the scope to make sure you don't lose them.

I have not mounted this 1X optic to a rifle caliber gun at this point so I cannot comment on how well it holds a zero when shooting a more powerful cartridge, but so far so good with the .40S&W Banshee and the 5.7X28 DBX.

Mounting the scope on top of either of the pistols it has been on so far has been quite easy considering they both utilize the standard pic rail on top.

This optic has a forgiving eye relief, meaning that it will work almost anywhere you put it on your rail, but always remember to only put it on a solid piece of rail, like on the lower receiver itself.

This scope is a 1X magnification, meaning that what your eye currently sees is what you get. It doesn't bring anything in closer. While this may seem stupid on the surface because there is no magnification, it really isn't.

When you have a scope with magnification it can limit your field of view, which can cause slower target acquisition.

This scope has a wide field of view and makes target acquiring that much faster. Plus, these particular firearms would be more of a closer quarters combat type of gun than a reach out and touch someone/something gun.

So the faster target acquisition coupled with the fact that I can keep both of my eyes open is a great thing.

Something else that I didn't fully understand about other red dot optics until a couple of years ago, is that if you have an astigmatism your dot will appear blurry. I always wondered why my dots were blurry for me, but crisp to others, until I found out one day.

It's because my eye has an astigmatism and it doesn't like looking at the dot because of how it is projected. (I'm not a dr. so I don't really understand why.)

This scope's reticle, however, is clear even with my eye condition. It is not blurry.

Overall, build quality seems great. It is a sturdy scope that, while I have not dropped it, seems like it will hold up over time.

The only weak spot I can see is the dust cover hinges feel a little weak. But, I suspect that the company designed them like that on purpose because they're spring loaded and are meant to swing up on their own, and must be loose.

I dig the Primary Arms ACSS Cyclops Prism Scope. The glass is clear and this is perfect for someone with an astigmatism like myself who struggles with a traditional red dot.

You can learn more about this scope on the Primary Arms website.

Episode 482: Choosing the Right Home Defense Firearm for YOU
Naked Man Shot Outside Florida Home, And Watch What You Say