Students sometimes tell me they don't carry their every day carry (EDC) gun every day because they have to wear formal clothing at work or at church. The major problem is the button-up, tucked-in shirt and tie for men. For women, they struggle to carry their handgun while wearing a button up blouse, dress skirts or pants.

Wearing formal clothing creates real challenges when carrying a concealed handgun. I'll address these challenges and offer some tips on how to overcome them. 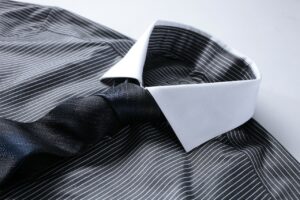 A step in the typical draw process from concealed is to clear your cover shirt so you can access your handgun. Formal, button-up shirts are inherently more form fitting with less stretch than a t-shirt, factors which also may hinder a clean draw. 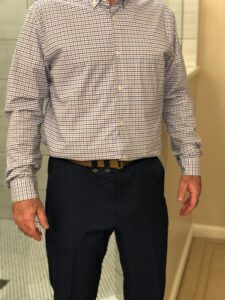 Usually, people wear their button-up/formal shirt tucked into their pants. Any shirt designed to be tucked in is longer. So not only must you pull a tucked-in shirt out of your pants during the draw process, but it hangs lower; this means you must clear more material to get your gun.

Another issue is that you may not even be able to tuck your shirt into your pants because of your holster. 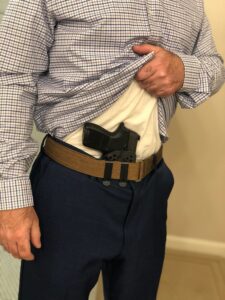 Overcoming the challenges of a tucked in shirt —

Not only are ties uncomfortable and, in my opinion, an odd piece of clothing, but they are incredibly unsafe. In a physical fight, I don't want to give the attacker an advantage by giving him access to something that he can use to choke me and control my head.

Here is a short story to underscore my point. While working patrol, sometimes I would wear the optional tie with my uniform. It so happened that during a fight, the suspect thought it would be a good idea to gain an advantage by choking me with my tie. This wasn't an issue, as I thought about this problem ahead of time. 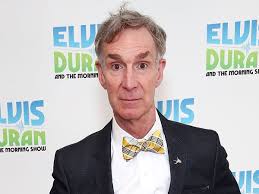 Bow ties are an option, but you risk looking like Bill Nye, the lunatic guy.

Overcoming the challenges of a tie—

Another issue is that the tie can affect the draw if you carry in the appendix position. It probably isn't a big deal, but you want to at least practice your draw while wearing a tie. The index point for most appendix draws is the belly-button, and that is precisely where the bottom of the tie reaches. You may grab the tie along with your shirt, or you may decide to use the dominant hand to clear the tie, depending on what works best for you.

Also consider if you wear a nametag on a lanyard at work. The same things that apply to a tie, apply to the lanyard. I recommend a breakaway lanyard if you wear it around your neck. And if you carry in the appendix position, consider adjusting where the name tag rests. Grabbing a cloth tie along with your shirt is one thing, a plastic badge is another. I simply shortened my lanyard so that my nametag was high enough as not to interfere with me grabbing my shirt.

How to tuck in your shirt while wearing a holster – 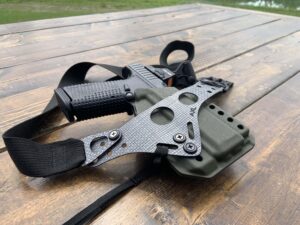 The PHLster Enigma is unique because it isn't a belly band, and not a holster. It is an independent chassis and belt system that your holster mounts to. I prefer the Enigma over any belly band products on the market. If the Enigma sounds like the solution to your concealed carry clothing problem, read my review here.

This holster is for women only, as the name implies. The holster attaches to a bra and is an option for women who struggle to find any other suitable method of carry. Before discounting this as unsafe or impractical, check out this thorough review by Annette Evans. 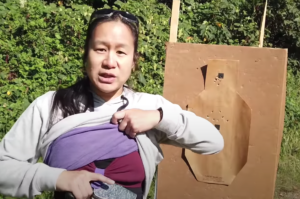 Some manufacturers sell clothing with built-in pockets designed to carry a gun. One example that comes to mind is this shirt from 5.11 Tactical. I'm not a fan of these methods personally, but I am sure it may be practical for someone in limited application.

For the purposes of this article, I am grouping ankle, thigh, pocket and shoulder holsters in with off body carry, because the shirt you wear won't affect these methods. Each one has its own pro's and cons that you should weigh before choosing as your primary method of carry.

Drawing from an ankle holster in the kneeling position.

Not everyone can head to work in a “tactical tuxedo.” You may have to get creative on how to conceal your gun while wearing formal clothing, but it can be done. I want to reiterate the earlier point about practicing in the clothing you often wear. Whatever method you come up with, spend some time on the range in similar clothing so you can establish a repeatable draw.

What do you think about this topic? Have you struggled to conceal your handgun at work? Have you used any of the methods mentioned above? What else worked? Let us know in the comments section.