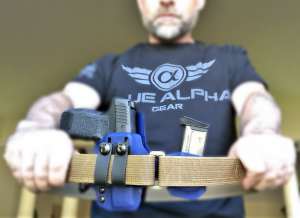 This belt is a must-have for you appendix carriers.

I own and have reviewed many styles of popular gun belts for everyday concealed handgun carriers. Maybe you own a thick, leather gun belt that stays rigid and keeps your holster and gun secure on your body. Maybe you use a stiff, reinforced nylon belt with a quick release cobra buckle.

Or if you're like me you own several of both and wear them at different times based on what I was doing that day. They are awesome, but both have an inherent weakness that makes them less than perfect for appendix inside the waistband (AIWB) carriers.

The Drawback for both is the buckle. More precisely, where to position the buckle on your waist. It is a problem mostly afflicting those who carry in the 12 o'clock or appendix position. The solution most find is to offset the belt buckle to either side, allowing the holster to clip where the belt buckle would normally be.

An additional issue that can present itself, especially with thick leather belts with metal buckles, is that it can add a bit of bulk in the front. Further accentuating the fact that you are carrying a gun in that area.

I often simply wore the Velcro liner belt as a normal belt. The problem was the rough Velcro would tear up the inside of my shirts. Also, it was not rigid enough to make a good gun belt.

Around 4 years ago, I remember seeing a new company releasing some cool gun belts made from nylon. At the time I was pretty dogmatic and still wasn't sold on nylon as an adequate material for gun belts.

My mind quickly started to change, and I was asked to review and demo different gear, and several belts. I spoke with a couple of owners from different gun belt companies and asked them if they could make something similar to my duty belt liner, but reinforce it for everyday carry.

Unfortunately, I am not a good salesman and no one bought into the concept.

Time passed and I figured someone out there had to be making something like what I wanted. Several months ago I circled back to check on the offerings from that company you likely have heard of called Blue Alpha Gear. I saw their product list of belts, and it was the Low-Profile EDC Belt that I had to have.

I reached out to Kurt one of the owners of the company and asked if they would be interested in me testing their belt as an option for us AIWB guys and gals. We actually spoke for about an hour and Kurt told me about how their company came to be, which was super cool. I love hearing how people built their companies, it is pretty inspiring. 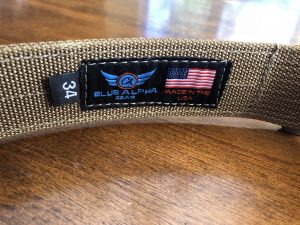 This Low-Profile EDC Belt is just what I needed.

After being sold on the customer service aspect of the company, I was anxious to get the gear and try it out. When I received it, one of the first things I noticed wasn't the belt but a card included in the package. This card explains how to exchange the belt for a different size. Big deal right? Lots of companies offer returns to exchange size.

But Blue Alpha Gear's process is not your typical exchange policy. They allow you to send in your belt for a change of size, free for the first 30 days. Not only that, but the shipping (both ways) is free to the customer.

And if that weren't cool enough, when you submit your exchange request online, they prioritize your order and immediately send it out to you. Yes, they ship your new belt out to you before you send them the old belt back. When you receive the new size, you drop it in the included pre-paid packaging and that's it.

This is the only company that I am aware of that works on the honor system for returns. After the 30 days, resizing is only 20 bucks. Did I mention they offer free shipping on every order and a lifetime warranty? Crazy good policy if you ask me.

I asked Kurt if their return policy gets abused by customers. He said on the rare occasions that a belt does not come back, they reach out to the customer. Almost always the customer says they forgot, and send the old belt back. He pointed out the obvious that sometimes people keep both belts, but added that the company would rather keep the policy as is, and take a hit on the occasional non-compliant customer, in order to provide the best purchase experience and satisfaction.

If their shipping, warranty, and exchange policy doesn't show Blue Alpha Gear's 100% commitment to the customer, I don't know what does. 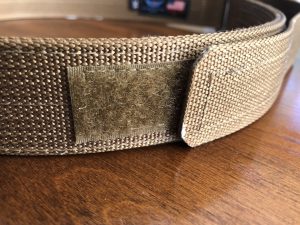 The buckle-less design and tapered edges of the belt make it easy to slide through any size belt loops.

Off the bat, I noticed the nylon is not as rigid as my scuba webbing, nylon belts that are made of several layers. At the same time, it is not soft and formless like nylon riggers belts that many people use. The nylon is treated with a resin that makes it rigid enough to hold a gun securely, but not too rigid to be comfortably worn as an everyday carry belt.

I wouldn't wear it as a competition belt where I was attaching a drop holster and all kinds of mag carriers, because these belts need to be very stiff. But they make reinforced belts for that application. 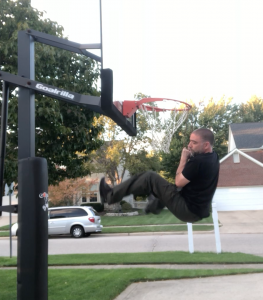 The belt isn't designed for use in rappelling, but the Velcro and the plastic loop was enough to support my weight.

The loop is plastic and the belt is only fastened with Velcro. Initially, this concerned me a bit. A metal loop would likely be indestructible, but probably not needed in an everyday application. And a buckle is more secure than Velcro sure, but here's the thing. I used the belt to hang from the basketball hoop in front of my house. Neither the Velcro closure nor the plastic loop failed.

So as far as the belt falling apart even during a pretty intense fight, is not likely. Velcro is much easier to remove than a buckle, so I recommend to always tuck the exposed end under a belt loop to ensure it doesn't accidentally get pulled and your belt released. 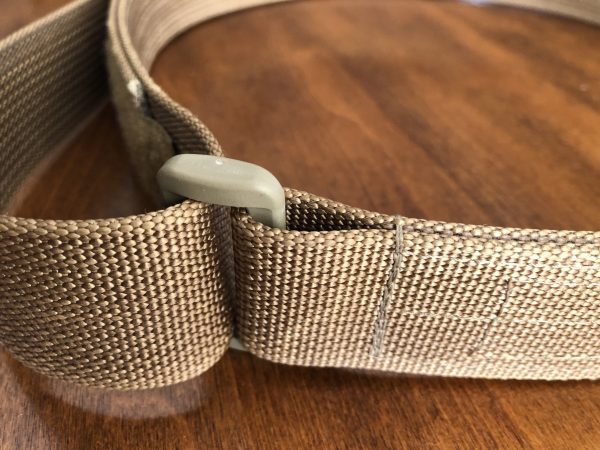 The plastic loop is surprisingly strong. It held my 150lb weight while I hung from the basketball hoop using only the belt.

Blue Alpha Gear uses all US materials and makes all the belts in Georgia. If you follow them on Instagram you can see a bunch of behind the scenes videos and photos of their processes and their cool, historic, renovated production building.

I love this Low-Profile EDC Belt for AIWB everyday carry. If you like buckles or want a stiff, competition belt, they make those styles too. The company's ethics and customer-service oriented focus are incredibly refreshing, and their gear is second to none. I can highly recommend this belt, and  Blue Alpha Gear as a company.

Editor's Note: Matthew spoke a lot about Appendix Carry. If you're wondering what this is or just want to learn more about appendix carry, we put a course together that is literally just $1.22. Check the Appendix Mini Course out here.