Join Our Newsletter
Shop Our Store
MAIN MENUMAIN MENU
By Matthew Maruster on August 15, 2022 in Gear

Because of its simplicity, it's easy to overlook the tool's versatility, importance, and effectiveness. If you aren't familiar with BarrelBlok, I'll give you a quick description of the device that I believe should come installed in every new gun. Now if you have a BarrelBlok, I'm going to list some applications for using a BarrelBlok that you may not have thought of. To be fair, the BarrelBlok isn't for every situation. Sometimes it's just not the right tool for the job, so I'll mention when you want to consider an alternative to BarrelBlok. 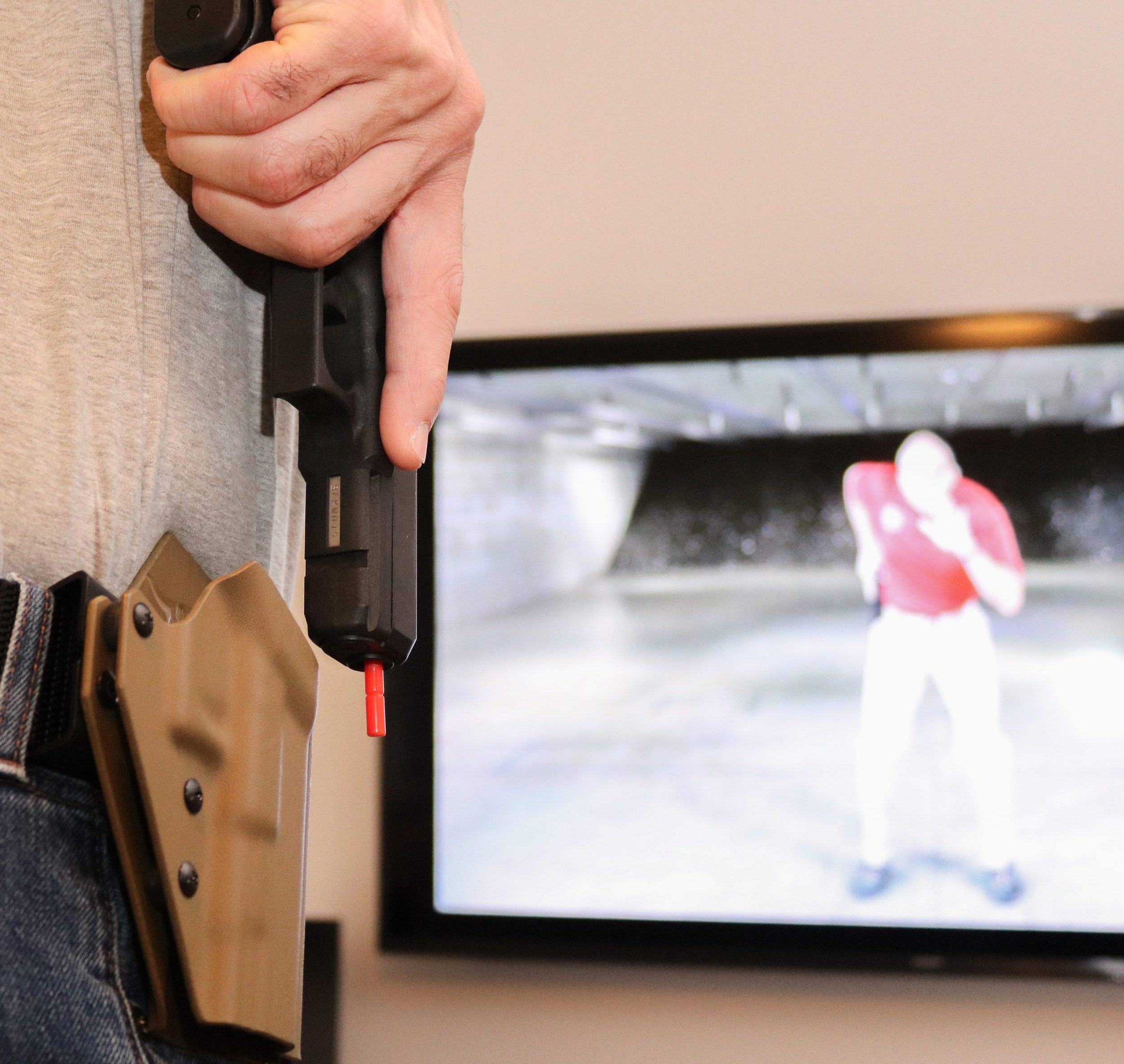 First, to start, the BarrelBlok is a simple, caliber-specific device made of a special polymer that renders the gun incapable of chambering a round. One end of the polymer is the same dimensions as a cartridge, and the other end is a long, semi-flexible rod that extends the length of the barrel.

When inserted, the BarrelBlok makes it impossible to chamber a round, thus rendering the gun inert. And because the rod portion extends the length of the barrel and protrudes out the muzzle, BarrelBlok provides a visible indicator the gun is unloaded and safe.

You can check out this review if you want to get more understanding of what BarrelBlok is.

This first one is probably the most obvious. BarrelBlok is by far the best product for rendering the gun safe and inert for dry fire practice. It is quick and easy to instal or remove, and can't come loose or fail. BarrelBlok provides a visible indicator that the gun is inert, adding redundancy to your safety plan for dry fire practice. An unloaded gun is great for dry fire, but a gun rendered incapable of firing is even better. 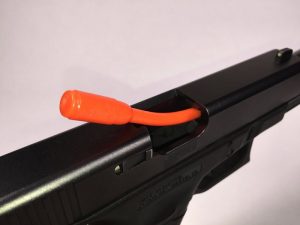 People have killed or injured themselves and others while cleaning their ‘unloaded gun'. Ideally, you shouldn't have live ammunition in the area while you clean your gun. An added layer of safety can only help and the BarrelBlok can do that. If you're not going to perform a deep clean and just bust some rust on the exterior of your carry gun, don't just clear it, stick a BarrelBlok in it.

If you're going to clean the barrel or take the gun apart, the BarrelBlok will not be too helpful.

It may also be wise to insert the BarrelBlok after cleaning, while you perform a functions check on your gun, and clean up all your gear. Once you've put everything away, remove the device and load up. I say this because I've seen people clean their guns, load up and then want to clean ‘one more thing.' Maybe they missed a spot of rust on the rear sight, and forgot they've loaded up, or just don't unload because it's quicker just to hit this last little area. This doesn't always result in an injury, but it's not safe.

3. Using Guns in Review Videos or Photographs for Social Media:

I've had people comment they were “flagged” by someone who pointed a gun at them in a video or photo. I think that is extreme and is not unsafe to point a gun at a camera, unless, of course, someone who doesn't need to be shot is standing behind the camera. Sometimes sticking a BarrelBlok in a gun used in still photos is a good idea.

However, I think there is an application in videos and photos to convey the gun is unloaded. 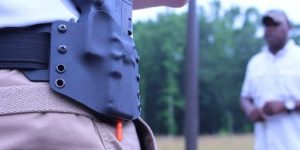 A while back, I decided I would start using a BarrelBlok when recording any videos where I handle an unloaded gun for demonstration. I also determined that in some applications, I would use BarrelBlok when photographing guns.

Using a BarrelBlok while recording video or taking photos has more to do with adding another layer of safety while recording than making sure someone doesn't dive behind cover when watching a video or viewing a still photo. Our attention can get diverted from safety when recording, which may lead to inattentiveness and injury.

Now while I think using a BarrelBlok for filming is a good safety tool for the person filming, I think it also conveys safe gun handling procedures to anyone watching the video. By modeling safe gun handling behavior, maybe we can influence people to take the extra step to ensure the gun is not just clear but inert whenever it's appropriate.

4. Guns on Display in Gun Stores:

Every once in a while, we hear of someone shooting themselves or someone else in a gun store. It's almost always with a gun taken off of the rack or out of a display case that everyone assumed to be unloaded. In a gun store, there is absolutely zero reason to load a display gun or have live ammunition in a nearby case. 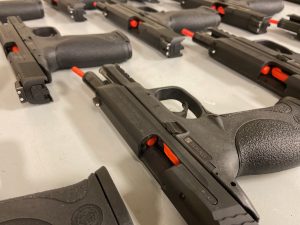 How much safer would it be if every gun in a gun store was not just unloaded, but had a BarrelBlok inserted? Of course, you should still check to ensure any gun that you confirm the condition of any gun someone hands you, but a visual indicator that the gun's chamber is blocked is an excellent added layer of safety.

Believe it or not, some manufacturers use real guns to test fit each holster they make. Using a real gun is much better than testing quality control with a dummy gun, because even a minor difference between the model gun and the real thing can create issues for the customer.

I know KSG armory tests the fit of each holster using a real gun with an installed BarrelBlok. Of course, you could take out the striker or do something else to render the gun incapable of firing. However, this process is impractical if you need to disassemble and store parts from many guns. It is significantly easier to just install a BarrelBlok, then not only is the gun inert, but everyone in the shop can see it.

Most instructors do not use live guns in the classroom because of the tremendous safety risk. However, sometimes a real gun is the best tool to use as a visual aid. In the past I've been creative, disassembling a gun before class in order to show the parts of a real gun inside the classroom. I've also used just the frame at times, and of course used my SIRT training pistol for in class demos. 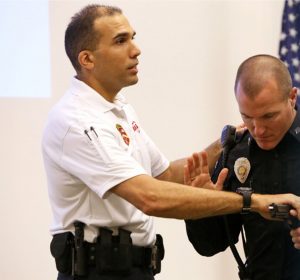 However, installing the BarrelBlok in front of the class, explaining how the device works, allows me to use a real gun as a teaching aid in class and lets the class know I take everyone's safety seriously.

I could lump this point in with general dry fire practice. However, I mentioned it separately because not everyone immediately recognizes practicing handling skills as dry fire.

Take, for example, learning how to draw and manipulate the firearm while seated in your car. A BarrelBlok is a fantastic tool to use in this case. Once the gun is clear and blocked, you can safely practice skills that aren't completely intuitive and require a bit more skill.

Another example would be tactically moving with your handgun. Most people never practice different carry positions or moving in a 360 degree environment because most ranges don't allow it because of more risk. Block your gun and practice moving through your house, or in a training environment with a security team or other group.

Often LEOs and military use real guns in force on force training. I have seen many safety strategies employed to make the training safe. Unfortunately, people have died in training exercises where everyone but one person had an unloaded gun. 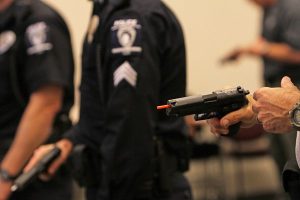 While some strategies are better than others, one tool to use with other safety protocols for force on force training is use of the BarrelBlok. If a unit considers using real guns in training, they should ensure every gun is cleared and has a BarrelBlok installed. Then prohibiting anyone from leaving or entering the training area ensures no one introduces an unchecked gun. The visual sign BarrelBlok provides is a benefit to this application as well.

Do you bring several guns to the range? Before you leave the range, it's not a bad idea to install a BarrelBlok in any gun you won't be carrying for self defense. Yeah, I get it. You should clear all the guns before putting them in the case and tossing them in your vehicle. But what if you missed one? What if one of your friends loaded up a gun intending to shoot it but didn't? It gets left in the case, and because you guys never shot it, maybe you don't clear it. 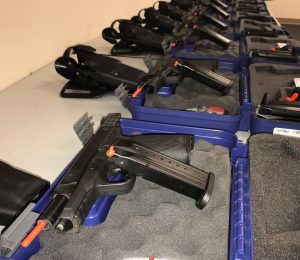 The point I'm trying to make is that if, besides clearing each gun, you install a BarrelBlok, then before leaving, you can visually see if you missed one. If you inadvertently left one gun loaded, not only is it dangerous, it could also be illegal in your state.

A common safety practice is to clear a gun and lock the breach open if possible, before handing it off to someone. It certainly wouldn't hurt to add installing a BarrelBlok to the process when applicable. I would still expect the person receiving the gun to confirm the condition of the gun, but again, the extra layer of safety can only reduce potential harm from negligence. 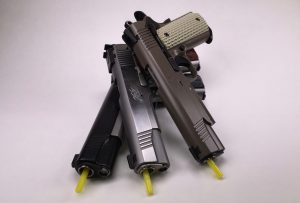 Instances Not to Use a BarrelBlok —

BarrelBlok is a tool that adds a layer of safety in many applications, but it is not intended to replace a gun safe. Safes, quick access vaults, concealment furniture and similar all provide a type of storage that is appropriate for certain applications.

2. In Storage to Prevent Rust:

Don't confuse BarrelBlok with a product from Otis called the Bore Stick. The Bore stick is a product that is also inserted down the barrel but has a chemical that helps keep the gun from developing rust when stored for extended periods. The BarrelBlok has no such coating and is just made of polymer. 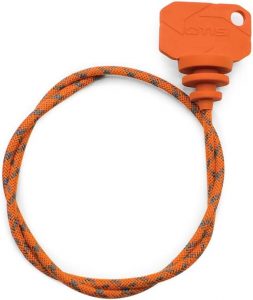 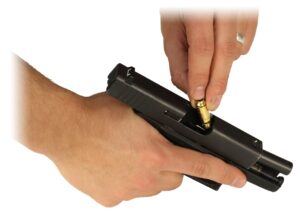 Finally, of course you can't use the BarrelBlok when you live fire. This should be quite obvious by now, but I'm including it because I know some of you thoughtful readers will call me out for not stating the most obvious instance where BarrelBlok is not useful.

I hope this gave you some new ideas for how to use your BarrelBlok. If you've been wondering if a BarrelBlok is something you would even use, hopefully you can see how versatile and useful this inexpensive device really is.

So what reasons to use or not to use a BarrelBlok did I miss? If you use one, share your experience in the comments below. For more information about BarrelBlok, you can check out the website here.

S7E4 – Discussing Range Medicine with Brian McLaughlin
S7E5: Drawing From Behind a Table or Steering Wheel