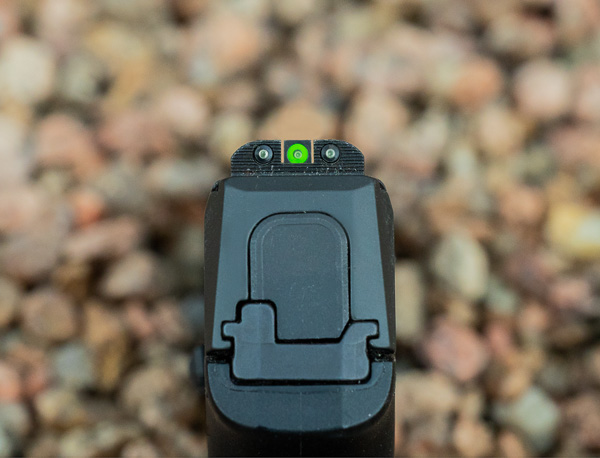 The XRAY3 Day/Night Sights are excellent, very visible and bright in both daylight and low-light conditions.

On this episode of SHOP Talk with Riley, he goes into depth on sight picture, eye dominance, and what you need to see in order to shoot your gun effectively. Personally speaking, one thing I'm working on is getting used to not completely lining up the sights at close distances.

What I mean, and this is something that I've heard from a few other semi-pro shooters in the past, is that when the target is close to you your sights can be a little off and you'll still have an acceptable shot.

This is good news for those of us who practice at, what I like to call, “self-defense distances.” That distance is close like the arm's length to about five yards or so. These are the distances most self-defense scenarios happen and we wouldn't really have time to aim anyway.

What I'm trying to work on, is getting used to not using my sights as much.

In this video, Riley helps us get a better understanding of this and points out that even if your sights are not completely lined up and you need to take the shot that you'll still hit your target at those distances. This is true just as long as you're trying to hit the torso, and not taking a high precision shot like one to the head.

Sure, at further distances your sight alignment is more important and he talks about that, as well. You can watch the video, here:

At the end of the video, you heard Riley talk about the new Fighting From Cover Course we've just released and I wanted to take a moment to talk about that and tell you how to get it. I'm going through the course right now and can say that it's good.

It teaches how to stay alive during a firefight by using cover to fight around.

After seeing some of these videos, it's not as straight forward as you'd expect. A lot of the times, these things that provide cover are odd to shoot around and sometimes downright hard to shoot around. The videos go into depth to show us the ins and outs of making the best use of any cover around us during a shootout, and fighting to stay alive.

You can find the course here.

One Response to SHOP Talk: See What You Need To See